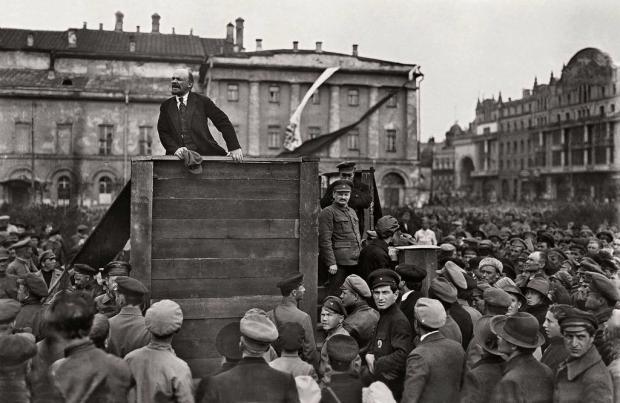 Lenin, chief architect of history’s first successful workers’ revolution, would have been 150 on 22nd April this year if he were alive. He was not only a Russian revolutionary, but also one that belonged to the whole world. That the word “Russian” did not appear in the name of the state he founded after the revolution is historically significant: the Union of Soviet Socialist Republics is the first state in modern history that does not refer to a nation or a geographical region in its name. The respect Lenincarried towards all nations as much as towards the Russian nation is what made possible the entirely peaceful secession of five different nations (Poland, Finland, the three Baltic countries) oppressed under Tsarist Russia – known as the prison of nations – from the young socialist state.

Most importantly, Lenin dedicated a special effort to enable tens of millions of Muslims living inside Russia as well as the Caucasus and Central Asia to join the march towards a classless society within the framework of a socialist federation. His approach as a leader towards these peoples’ nationality and religion was of utmost rigor. Thus, Lenin does not belong to Russians only. He belongs to us all.

Why the “litmus test”?

The experience of socialism in the 20th century, and first and foremost of the USSR that Lenin had founded, collapsed before humanity entered the 21st century. The primary reason behind this collapse was the abandonment of the program of world revolution, i.e. internationalism, on which Lenin and his comrades who shared the same program with him consistently insisted.

Despite this, the mouthpieces of the capitalists and those leftists who have abandoned all hope of socialism have done, and are doing, everything in their power to hold Lenin responsible for this collapse. Lenin was the most consistent student of Marx. The present-day enemies of Lenin, however, try to tear him apart from Marx. “Marx was a humanist,” they say, “he critiqued capitalism so well and came up with nice concepts such as alienation or commodity fetishism. “However,” they add, “Lenin established an extremely disciplined party and that led to the bureaucratization of the USSR”. And then they go on: “Lenin was merciless; Lenin defended the disenfranchisement of the bourgeoisie under the dictatorship of the proletariat; Lenin was ruthless against his enemies”. And on and on they go.

Thus Marx is rendered material for intellectual mumbo-jumbo, an excuse to show off knowledge and gain prestige during conversations. He is made into a clean-shaven chatterbox and presented as an academic intellectual rather than a revolutionary. Lenin, on the other hand, is constantly stigmatized so as to demonstrate that to fight for proletarian power is a bad thing.

Therefore, it is not enough to be a Marxist anymore. There cannot be a Marxism that doesn’t fight for the emancipation of labor. Those who debase Lenin are arguing against precisely this. Thus, today, the litmus test for socialism is not Marx, but Lenin.

Lenin is the lighthouse on dark seas!

Yet, Lenin is irreplaceable. There are many reasons for this. Let us begin with the following: Lenin has inscribed unforgettably into the history of socialism that revolution is necessary to get rid of the capitalists’ system of exploitation and a revolutionary workers’ party is necessary for the success of the revolution. The construction of the workers’ vanguard party is an irreplaceable task. Whoever argues that it was Lenin’s party that bureaucratized the USSR has understood neither that party nor the history of the USSR. If they have indeed understood these two, then they are lying. They have not understood Lenin’s party because that party is the most democratic one in modern history. Strict discipline ensures unity of action directed towards the outside. Within the party, democracy and debate are practiced freely among the members. They have not understood the history of the USSR because the reign of the bureaucracy was established only through the murder of hundreds of thousands of members and almost the entire leadership of Lenin’s party during the years 1936-40! That is to say, the party was destroyed and re-established precisely because it acted as a barrier to the bureaucracy.

Second, Lenin is the symbol of the fraternity of nations and therefore a guarantee for the establishment of socialism on a world scale. He is a guide for the liberation of the oppressed nations. The socialisms that came after him turned out to be nationalist precisely because the bureaucracy just did away with his internationalism and practiced Russian nationalism. The solution is the right of nations to self-determination, i.e. precisely what enabled Lenin’s internationalism.

If these conditions are not satisfied, the revolution cannot win. Neither the working class nor the other oppressed classes and strata can achieve emancipation.

Lenin in a post-Leninist age

Today, the majority of socialists are blaming Lenin for their own mistakes in the past, for their own blindly following of the Soviet bureaucracy. This is why they defend a loose, liberal “broad party” with an imprecise program. Anything but a Leninist party will do! This is why they reject class-based politics; they have been doing everything in their power to declare and prove the end of the proletariat for four decades. This is why they mistake bringing together different movements that defend the rights of different oppressed groups, i.e. identity politics and loose alliances that they name “intersectional”, for actual politics. Anything but the Leninist politics of proletarian hegemony!

We call this “post-Leninism”. Post-Leninism is the name for socialists turning into petty-bourgeois. It is the name for socialists turning their backs on the workers and the poor. The workers have turned towards the sinister and lying bourgeois politicians who claim to be defending them precisely because this post-Leninist politics is practiced across the world: Donald Trump in the USA, Boris Johnson in the UK, parties with fascist aspirations all over continental Europe. And the AKP in Turkey.

Here is what we say: Lenin for reconnecting with the proletariat. Lenin for ending the rule of the bosses and establishing proletarian power. Lenin for world revolution and fraternity of the peoples!

Happy 150, comrade Lenin! For you still live on in our struggle!