Legal and political victory for the six DIP women: women's self-defence no crime 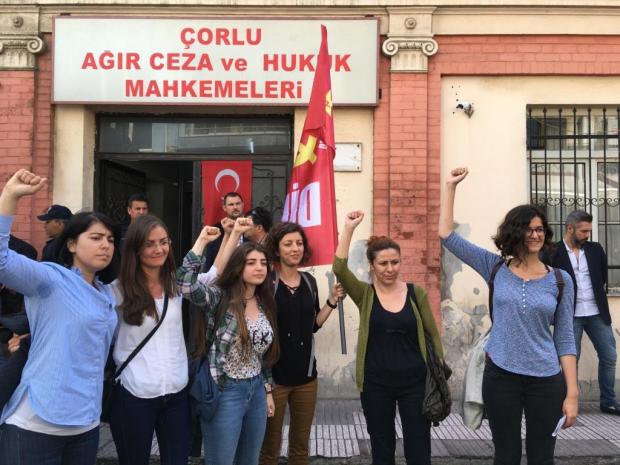 The six women militants of the Revolutionary Workers’ Party (DIP) were acquitted on 13 June at the trial in which they were charged with terrorist propaganda in a court in the industrial working class city of Çorlu, west of Istanbul, in European Turkey. The charges had been brought against them due to the fact that the leaflet that they distributed on 6 March for International Working Women’s Day, written in the name of the party, expressed solidarity with Kurdish women humiliated and abused by the security forces.  This is a great legal and political victory in a time when the Turkish state is engaged in an extreme blackmail that declares any criticism of its deeds in Turkish Kurdistan as “support to and propaganda for terrorism”.

The second hearing was much more difficult than the first. The trial prosecutor, who had explicitly disowned  the indictment (written by another prosecutor) during the first hearing, came up with a demand to have all defendants punished, with an additional demand that the authors of the text, i.e. the party leadership, be judged and punished as well. During the first hearing he had himself criticised the indictment and disowned it, but apparently this was because the indictment was too soft for his taste! One of the judges took an extremely hostile attitude on procedural matters, constantly trying to bully the lawyers and the defendants, who proved very difficult bites to chew! The acquittal, something of a surprise, was decided 2 to 1. The prosecution will, in all probability, appeal the decision and the case will go to the Court of Cassation. So not everything is decided yet, but the chief battle has been won.

This is an important victory for the left and the party. Since January, when a larger group of academics were persecuted for expressing solidarity with the Kurdish people oppressed by the forces of the state, the atmosphere has been one of blackmail against any expression of solidarity or any criticism of the operations. This case comes as an important gain in this context. As for DIP, the case has proved to be an important test with respect to the resoluteness and preparedness of this young revolutionary party in the face of adverse circumstances. That test has now been passed with flying colours.

If an acquittal decision was obtained in this difficult case, especially in a time of endless hysteria regarding “terrorism” fanned by Erdoğan himself and the government, this was due, first and foremost, to the magnificent court performance by the lawyers and the defendants. Among the adverse circumstances is the fact that only last week two deadly bombs exploded in Istanbul and Mardin, killing more than a dozen people. The defence by the team of lawyers (of four this time, all but one affiliated to the party, that one person being a very active feminist lawyer who showed wonderful solidarity) was impressive and the political stance of the defendants, all young women between the ages of 19 and 35, with comrade Armağan, a leader of the party, as the chief spokesperson, was impeccable.

It must be added, though, that the support the women of DIP have received both nationally and internationally was also very effective. The DIP and the defendants are thankful for this wonderful solidarity.

RedMed has already published the signatures that were sent in for a petition of solidarity with the women of DIP:

It is to be hoped that in the future this wonderful display of solidarity will serve much more positive purposes.