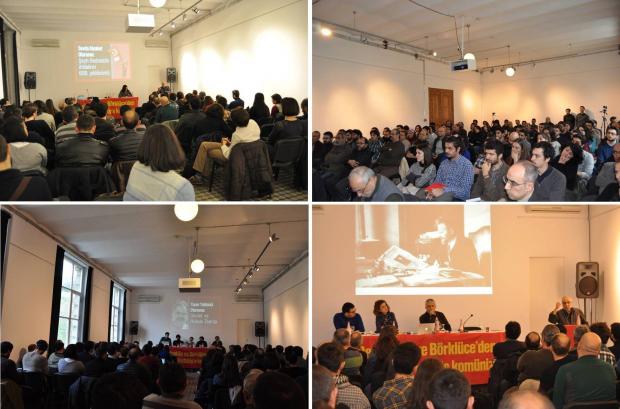 The Turkish language theoretical journal Devrimci Marksizm, supported by the Revolutionary Workers’ Party (DIP), organised a conference on the occasion of its 10th anniversary. It also brought out its first special annual issue Revolutionary Marxism 2017.

Devrimci Marksizm, the Turkish review, was first brought out in 2006 and first distributed through militant sales on May Day that year. It is now at its issue No. 29. The next issue No. 30 is planned to come out in the spring of 2017. The journal is planning a special issue in the course of the year on the October Revolution in Russia on the centenary of this epoch-making historical event.

The English version is planned to come out once a year. This year’s first issue carries articles by some of the regular contributors to the Turkish journal as well as pieces by Savas Michael Matsas from Greece, Tamas Kráusz from Hungary and Ewa Groszewska from Poland. The main topics taken up are the rise of what we at the journal call “proto-fascism” in the advanced countries, the surge in class struggles internationally since 2011, Islamism on the international arena and in Turkey, and the analysis of the collapse of the Soviet Union on the occasion of the 25th anniversary of the formal dissolution of the Soviet Union. Revolutionary Marxism 2018 will, in all probability, focus on the centenary of the October Revolution, as well as dwelling on more topical issues.

Devrimci Marksizm also held an extremely successful conference on the occasion of the 10th anniversary of the birth of the journal. However, the date was chosen to coincide with the anniversary of the dissolution of the Soviet Union. It was held on the 25th of December, the anniversary, to the day, of the lowering of the Soviet flag one last time from a flagpole on top of the Kremlin. The second session of the Conference was itself devoted to the topic of the demise of the 20th century socialist experience, with two speakers, Özgür Öztürk and Sungur Savran, focusing on the Soviet Union, and one, Burak Gürel, dwelling on the Chinese experience.

At the beginning of the session, the declaration of the Association of Marxist Organisations of the Russian Federation, titled “Appeal to citizens of the Soviet Union, their children and grandsons”, an appeal brought out on the occasion precisely on the 25th anniversary of the dissolution of the Soviet Union, was read in Turkish translation before a fully packed hall. The appeal received a long and hearty applause from the audience. (See the Russian original, http://redmed.org/ru/article/obrashchenie-k-grazhdanam-sovetskogo-soyuza-ih-detyam-i-vnukam, and English translation, http://redmed.org/article/appeal-citizens-soviet-union-their-children-and-grandsons, on the RedMed web site.)

Focusing on the economic contradictions experienced by the Soviet Union, Özgür Öztürk pointed to the futility of views on the socialist left which claim that the Soviet Union was no different from capitalist countries or the light-mindedness of those that attribute the collapse to the mistaken ideas or misguided policies of this or that leader. He dwelled on the successes and failures of the Soviet economic system, stressing that it was an economy in transition from capitalism to socialism. The contradictions of this economy were traced to the failure in raising the productivity of labour to a sufficient degree, the inability to pass from extensive to intensive development and the national isolation of the economy, whereas the expansion of socialist revolution to many new countries made it theoretically possible to extend central planning to a new scale.

In his presentation, Sungur Savran castigated those on the left internationally and in Turkey who refrained from any serious research or analysis on the question of the collapse of the 20th century experience of socialist construction, which, he claimed, was the single most important factor that shaped the crisis in which the international movement had fallen in the last quarter of a century. Pointing out that the Soviet Union did not collapse either through imperialist aggression or conspiracy or as a result of domestic counterrevolution, he posed the central question of who was responsible for the demise of the Soviet Union. He attacked the Gorbachev-Yeltsin duo, but reminded the audience that Gorbachev was elected to his post in 1985 unanimously by the CPSU. Having also discarded the credibility of attributing all blame on Khrushchev, he finally came to the core of the problem: the ascendancy of a bureaucratic caste to political power in the Soviet Union in the late 1920s and the 1930s led to the Moscow Trials as well as the physical purge of a whole generation of devoted communists, followed by the dissolution of the Comintern in 1943. It was at this stage that the decisive contradiction leading to the demise of the Soviet Union was shaped. It was thus the CPSU under the control of this bureaucracy that wilfully and shamefully destroyed the last gains of the Great October Revolution, the greatest proletarian revolution that history has witnessed.

Burak Gürel did a similar analysis for China, the single most important attempt at building socialism in the 20th century after the Soviet Union, the latter being the paradigmatic instance. Pointing out that the people’s republic was marked by the prominence of a bureaucratic caste from its inception, Gürel stressed that, nonetheless, the post-revolutionary workers’ state brought immense gains to the working class and the peasantry, which formed the overwhelming majority of the population. Proceeding to discuss the internecine struggles within the Chinese bureaucracy, Gürel dwelled at length on the two episodes of “Let a Hundred Flowers Bloom” and the so-called Great Proletarian Cultural Revolution. Having traced the transformation of Maoism in the 1970s into a reactionary position on the international arena, Gürel showed that the evolution of the People’s Republic of China significantly fit the analysis made of the Soviet Union by Trotsky.

The state and law

The first session of the Conference was oriented to a discussion of a variety of questions around the theory of the state and the philosophy of law. In a presentation titled “Dual Power and hegemony”, Barkın Asal, a recent victim of state purge at universities, engaged in a Marxist settling of accounts with Euro-communism, a source of inspiration for the left-wing liberalism of a later period. Ateş Uslu, on the other hand, entered a domain that has so far been widely neglected on the Marxist left to discuss Islamic political thought and its importance strictly on the basis of the methodological premises of historical materialism. This presentation was in complete synchronisation with the effort of Devrimci Marksizm as a journal of theory to lay the basis for a Marxism more firmly grounded on local soil.

E. Ahmet Tonak, for his part, analysed the economic activities of the capitalist state in terms of the categories of Das Kapital.  He also presented the results of research into the relationship between the taxes paid by the working class and state spending on services to the working class in Turkey. This showed that, as a rule, taxes were systematically in excess of state expenditure on workers’ needs, resulting in the rebuttal of the welfare state myth in Turkey.

Our comrade Levent Dölek, also a target of state repression who has recently been expelled from his post at the university for his militant trade union and political work, was the last speaker of this first session. He took on the oft-repeated attack on the name of the journal, Revolutionary Marxism in English translation, an attack that claimed that since there could be no Marxism that is not revolutionary, this name was at best redundant. He pointed out that it was not our journal but Lenin who coined the term “revolutionary Marxism” in his effort to distinguish genuine Marxism from the social chauvinism of the Kautskys and the Bernsteins that also posed as Marxism. Levent Dölek then proceeded to discuss in the flesh and blood of current Turkish politics the question of whether the capitalist state is an organ of class domination, as Lenin contended in The State and Revolution, or an arbiter between the different classes, as all revisionist, opportunist and revisionist schools of thought would have it.

From Sheikh Bedreddin and Börklüce Mustafa to Lenin and Trotsky

The banner that adorned the speakers’ table read (in Turkish of course): “From Sheikh Bedreddin and Börklüce Mustafa to Lenin and Trotsky.” The Sheikh and his lieutenant Mustafa were the leaders of a revolution that occurred in 1416 with a communist and internationalist programme. (This revolution has been taken up elsewhere on RedMed: see http://redmed.org/article/sheikh-bedreddin-greco-turkish-communist-internationalist-avant-la-lettre.) The third session was devoted to this revolution on its 6th centenary almost to the day. Once the revolution was defeated by the Ottoman army, Bedreddin was hanged in Serres, a city now on Greek territory, on 18th December 1416.

The session took up the 1416 revolution through music, the poetry of the great Turkish poet Nâzım Hikmet (who lived in the Soviet Union for long years, both as a youth in the 1920s and as an elderly man in the 1950s and early 60s and died in Moscow in 1963), a brief section of a documentary film by Yusuf Saygı and Erdinç Metin and a speech by our comrade Sungur Savran, who both commented at length on the character and significance of this revolution and made the closing remarks of the conference.

All in all, the 10th anniversary conference of Devrimci Marksizm, now also Revolutionary Marxism, was a resounding success for the voice of Marxism in a country that the world looks on with amazement and trepidation.