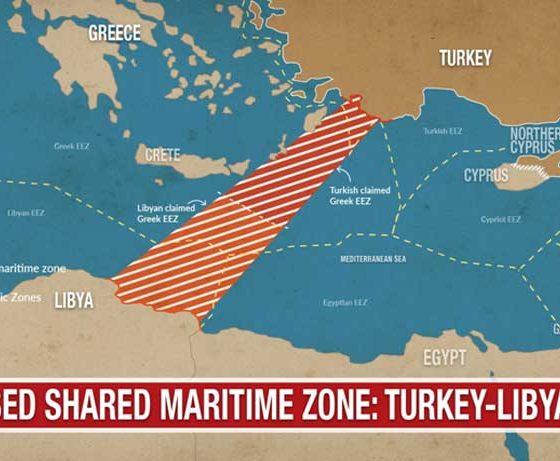 War against the war of imperialists!

No proxy war in Libya!

No to the war of natural gas robbers in the Eastern Mediterranean!

Down with the imperialists all over the region!

The alternative is the road taken by the peoples who started rebellion and revolution!

The two fraternal revolutionary Marxist parties in Greece and Turkey, the EEK and the DIP, condemn unequivocally the reactionary international meeting on Libya in Berlin, Germany, on January 19, 2020, organized by the US and the EU imperialists with the participation of Russia, China, Turkey, the United Emirates, Algeria, the Republic of Congo, and the two belligerent factions in Libya led by Haftar and Sarraj. The aim of the meeting is not a so-called “cease fire in Libya” but how to secure the conflicting interests of the imperialist brigands and of the reactionary powers in the region at the expense of all the oppressed and exploited peoples in the Eastern Mediterranean, the Middle East, and Africa.

Libya is becoming a new stage for a counter-revolutionary showdown as Arab revolutions of Middle East and North Africa, which started in Tunisia and Egypt in 2011, raise their heads again in Sudan, Algeria, Iraq and Lebanon. Liberty was not achieved in Libya after the rule of Ghaddafi, who was toppled in 2011 by imperialists’ and NATO’s aerial strikes and their mercenaries’ attacks by land, assisted with Turkey’s maritime reconnaissance. Instead, it was turned into a counter-revolutionary wedge inserted between the Tunisian and Egyptian revolutions by the imperialists and their collaborators. Libya has been divided in the grip of civil war and become a corpse in the hands of imperialism. Today, either Government of National Accord (GNA) under the leadership of Sarraj or Libyan National Army (LNA) led by General Haftar are anything but carrion crows competing on that corpse.

The war between Sarraj and Haftar is an internal feud of reactionaries in the region, various imperialist forces supporting one or the other behind the curtains. Sarraj’s GNA, primarily supported by Turkey and Qatar, is also under the auspices of British imperialism and Italy. United Nations’ recognition of GNA does not grant a bit of legitimacy to its rule since this is a recompense paid by “International Community” to Sarraj for being a mercenary of imperialism. The Muslim Brotherhood and other political Islamists backing Sarraj have never been anti-imperialists. The war of these counter-revolutionary sectarian forces used and discarded by imperialism and thus in frustration, is not meant to defeat imperialism but to seize Libyan oil on the one hand and regain their old functional and well accepted position before it. Just like Turkey and Qatar patronizing them politically, economically and militarily…

Behind General Haftar is a large counter-revolutionary imperialist-Zionist center composed of the United States, Israel, France, Egypt, Saudi Arabia and the United Arab Emirates. Rivalry between Greece and Turkey in the Aegean, Cyprus and East Mediterranean brought Greece, too, to support Haftar, inviting him to Athens for talks and coordination of action on the eve of the Berlin meeting, where the Greek government was not invited.

Russia also supports Haftar both politically and by mercenaries fighting in the field called Wagner. Russian oligarchs turning a blind eye on massacres of Israel and crimes of Saudi Arabia as well as avoiding any disruption to their collaboration with those reactionary forces providing funds and influence, take no offence in being on the same side with the imperialism and Zionism in Libya.

The Berlin meeting has also a special importance for the EU imperialist interests. For the European imperialists, particularly for France, Italy and Germany, Libya is extremely important both for its raw materials but also for its strategic position to control the migration tide from Africa’s population devastated by wars and famine, as well for the continuing, 30 year-old French imperialist war of intervention in the Sahel (Mali, Burkina Faso, Niger, Central African Republic, Ivory Coast)

The reactionary war of partition in Libya concerns not only the rich oil reserves of this country but also the fight over gas in the Eastern Mediterranean. Forces facing in Libya and struggling through their proxies agree on being deadly enemies of the Arab revolutions and as part of this hostility agree to approve the stealing by Israeli Zionism of the resources of the Palestinian people in the Eastern Mediterranean. This partnership also includes Turkey and Greece. The controversy is over the division of the booty.

The most important aim of Erdogan’s agreement with Sarraj determining maritime boundaries is to prevent Israel from selling the stolen gas of Palestinian people to Europe via Cyprus and Crete and to carry out this dirty trade over Turkey through a pipeline to be constructed. This policy is not only a result of Erdogan's ideological affinity with the Muslim Brotherhood but directly due to the interests of Turkey’s big bourgeoisie. The right-wing Mitsotakis, who sent his foreign minister to Libya to meet with Haftar, and then invited him to Athens on his way to Berlin, is following the path paved by the “left-wing” Tsipras government, which had previously come to a US-led four- country alliance in the Eastern Mediterranean with Israeli Zionism, Cyprus of the right wing President Anastasiades, and the Egypt ruled by the dictator al Sissi. Tsipras also had made a new agreement with US imperialism to expand and extend indefinitely the presence of the US bases in Greece. Now, Mitsotakis, another good servant of Trump, will be happy to implement this agreement in the name, of course, of a fake “national interest” in the reactionary antagonism with Erdogan and the ruling class of Turkey.

Behind this fellowship are the interests of the big bourgeoisie of Greece, who also wants not only a share in the theft of Palestinian gas by joining the EastMed pipeline project but also to protect and advance all its interests by integrating the imperialist plans in the region as a subordinate partner and as a policeman of imperialism.

Our fraternal peoples have no interest in this reactionary and nationalist fight of the bourgeois classes on both sides of the Aegean and on the island of Cyprus. Neither the military tension in Libya nor the natural gas sharing fight in the Eastern Mediterranean is ours!

We do not forget that in 2011 under the umbrella of NATO, governments of Turkey and Greece together clung to Libya's throat. Turkey provided two bases (Incirlik and Izmir) for the imperialist campaign against Libya and Greece opened four (Souda, Aktion, Araxos, and Andravida). While Turkey besieged Libya from sea by four frigates, one tanker and a submarine, F-16’s taking off from Araxos base of Greece loosed off bombs. As their quarrels between themselves do not belong to us, their points of agreement are against the common interests of the peoples of Turkey, Greece and Cyprus. That's why we need to make the same call en masse: Turkey and Greece should keep their hands-off Libya!

NATO, which the Turkish and Greek states are loyal members of, and Akrotiri and Dhekelia bases spared exempt from all controversies in Cyprus are the main security threats, not protection shields for our people. The common desire of our working peoples is the closure of all these murder bases and the expulsion of the imperialists from the Mediterranean by taking their bases and war fleets! Let us spread the sentiment against US imperialism that began in Baghdad to the entire Middle East and expel the USA and its allies from the region!

Israeli Zionism, with whom they are accomplices, is our enemy. They look for a share from extortion of natural resources of rightful Palestinian people. We want a Mediterranean where Zionist Israel is brought down, all peoples beginning with Palestine will be free and use the resources equally and fairly!

Down with the sworn enemies of the revolution in the Middle East, North Africa and the Mediterranean, carrion crows flying over Libya, juntas collaborating with imperialists and Zionists, Kingdoms and Emirates!

The Arab revolution was fraternal to the Gezi rebellion in Turkey, the general strikes in Greece and the squares movement and all were parts of the Mediterranean revolutionary basin complementing each other. Today, the friends of Turkey, Greece, Cyprus are the revolutionary working peoples from Sudan to Algeria, Iraq to Lebanon who turn their faces to revolution.

This is the alternative: Show solidarity with the peoples who have started revolution and rebellion, join them!

This is our call to the working peoples of Greece, Turkey as well as Cyprus, South and North: Unite against imperialism, Zionism, and your own bourgeois governments!

Enter the fight to exit from NATO, to close Incirlik and Kurecik, Souda, Aktion, Araxos and Andravida, Akrotiri and Dhekelia!

Join the construction of revolutionary working-class parties for the victory of our revolution!

Raise the banner of proletarian internationalism against nationalism, racism, chauvinism!

Unite the two sides of the Aegean into a socialist Balkan Federation!

For a free United Socialist Cyprus!

For the victory of the Arab revolutions and the struggle of the Iranian people!

For a secular and democratic workers' state in the historic territory of Palestine where Arab and Jew will live fraternally together!

For the Socialist Federation of the Middle East and North Africa!

For bread and freedom!