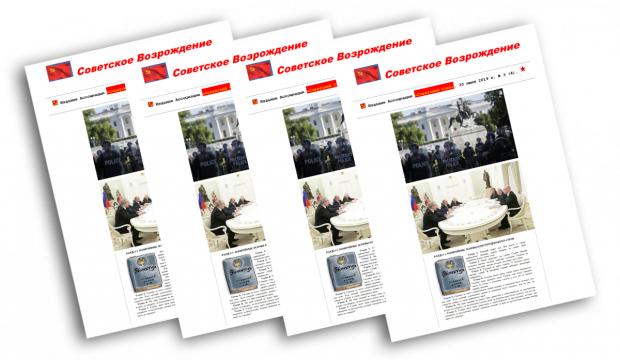 We are proud to present to our readers Issue No. 3 for 2020 of Sovetskoe Vozrozhdenie. Бюллетень Ассоциации «Советский Союз» or in English Soviet Renaissance. Bulletin of the Association “Soviet Union”. The very first issue of the journal was published in December 2019 and Issue No. (2020 (1)) were also posted on RedMed.

"Soviet Renaissance" - always on the sites of RedMed and the RCP .... 2

"Citizens of the Russian Federation - against amending the Constitution!"… 11

No comment. "I don't see any corpses lying on the streets." 26

No comment. "This is a question in proportion of those who support and those who do not support. We will find out after the vote."27

No comment. "Such eventual reasoning, I do not know how appropriate...." 29

The Congress of the Left Front condemned the attempt to usurp power under the guise of constitutional reform. 30

"No to Putin and his amendments! Yes - changing the System! "32

A united organizing committee of protest forces! For an active boycott! 37

NO to Putin's dictatorship! 38

For the resignation of the President, the State Duma and early elections 43

We, the multinational PEOPLE of the Russian Federation, demand the abolition of amendments to the Constitution!!! 45

Appeal of municipal and regional deputies 48

Fraudulent voting on the constitution on July 1 is outlawed! 50

We are not expendable material 52

Eduard Nigmati. On the Social Constitution 55

"In accordance with the communist ideal" 70