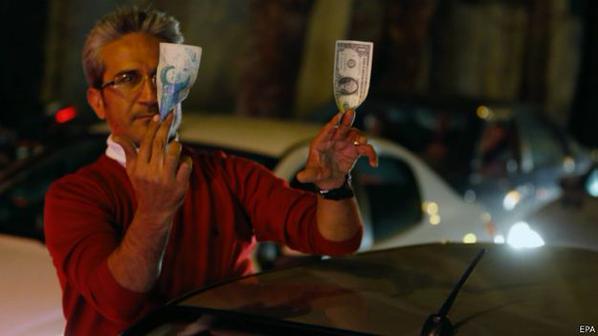 Iran reached a preliminary agreement with the 5+1 (E3+3) group on its nuclear program in Switzerland after long negotiations. Barack Obama called the agreement a “historic understanding” while Iranians watched a US president live on TV for the first time since the 1979 revolution. The deal is made at a time when the Middle East is going through a period marked by crises. Civil wars are still going on in Syria, Iraq and Libya and most recently another war has erupted in Yemen. It is quite well-known that Iran is one of the important actors and parties involved in these wars.

The joint press conference following the preliminary deal raised different questions: how will this agreement affect Iran's relationship with the West, or what will its effects be on the Middle East's balance of power? Even those who follow Iran's internal policies may ask how this agreement will be met by different political wings of Islamic Republic, especially by the hardliners.

An agreement to escape from crisis

The declaration made by the Iranian and US authorities following the joint conference in Lausanne shows that the preliminary agreement reached, and reached final agreement projected for signature in June will not exceed the limits of Iran's nuclear program. It means that the political conflict between Iran and the West will continue in the Middle East. However, especially, when both sides are faced with a common enemy like the Islamic State, they would prefer to spend a period with less tension on Iran's nuclear program. Considering this fact, the more important question should be: which conditions led the West and Iran to such an agreement?

It seems that the imperialist powers now understand that after six heavy rounds of UN sanctions and several individual EU and US sanctions aiming at Iran's financial, military, and even scientific activities, imposing a new set of sanctions will be meaningless since the previous sanctions didn't stop or even slow down Iran's nuclear activities. They also know if they do not reach an agreement with Iran there remains only one choice to stop Iran's nuclear program, the choice which Israel or at least Netanyahu always comes up with: attack Iran.

The imperialist powers know that they have lost their hegemonic power over the Middle East and Central Asia. Especially the US started two wars in the region, one in Iraq and another in Afghanistan, and left the region without gaining any of the results it aimed at. Not only the two regions did not become stable and secure for international companies to exploit, but nor could the US put an end to the “terrorism” in the region they were always talking about. Hundreds of thousands of people lost their lives and millions lost their home, towns and cities. Iran has become more powerful than before in the region especially in Iraq, and the Sunni and Shiite conflict has deepened. The latest example is the Yemen war, led by Saudi Arabia against Iran-backed Shiite Houthis. Moreover, at least for the people of the region a more dangerous orgranisation than Al Qaeda appeared from inside of the ruins of the war . In a word, as a result of imperialist war in the Middle East, Iraq and Syria are drowned in an endless civil war as is Afghanistan.

After such unsuccessful experiences following the direct invasion of Afghanistan and Iraq, and also the even more ineffective experience in Syria by arming the so-called “moderate” opponents of Assad's regime, the West has no tolerance to afford another direct or indirect war in the region. Especially, considering the balance of power in the Middle East, any invasion could drag the region into a complete state of war. It seems that any attack on Iran or only on its nuclear sites are ruled out, at least for the remaining period of Obama's term in office. In this perspective, the US prefers to continue the negotiations on Iran's nuclear program and reach an agreement, which restricts its power, instead of trying to stop it, which seems to be unreachable in the short run.

On the other side, Iran is dealing with economic problems caused by the sanctions. For Iran the worst scenario is to face the uprising of the poor people tired of economic difficulties. Iran is gradually restoring the loss of legitimacy that emerged from the vast uprising in 2009 after the presidential election. Here, Rouhani is the key figure. He is a moderate conservative president who has a completely different national and international political approach than Ahmadinejad, trying to lower the tensions at both levels. In this situation, Iran cannot afford another loss of legitimacy emerging from a mass uprising, this time by people demanding bread, job and social justice instead of their vote.

Monitoring the recent developments in the Middle East and the declarations of US authorities about Iran, it is easy to understood that the US is not aiming a regime change in Iran in such a tempestuous period. On the other hand, the Iran regime is aware of both its own economic problems and the imperialists’ loss of hegemony over the region. They know that the regime is secured for a sufficient period of time. In other words, Iran feels it is a convenient time to accept some limitations on its nuclear program such as lowering its uranium enrichment capacity or more stringent inspections by the International Atomic Energy Agency. Considering these, this preliminary agreement or the expected final agreement is a “win-win” embellished escape hatch from an irreversible crisis for both sides.

The civil war in Iraq and then in Syria intensified the Sunni-Shiite conflict in Middle East. Recently, Saudi-led coalition forces attacked Houthis when they realized that they are going to lose the running religious proxy war in Yemen to Iran-backed Shiite group. This war added a new dimension to the religious war in the region.

The pro-Iran Arabic media are reflecting the Houthis as “the extension of the axis of resistance”. Apart from Iran's probable support to the Houthis, not definitively established, the powerful figure of Iran in the region is a source of inspiration for Shiites in other countries. Consequently, Iran allies such as Syria and Hezbollah praised the Iran nuclear deal as victory. Naturally, under such conditions, any sort of agreement between Iran and the West was not going to relieve the Sunni anti-Iran (or more generally anti-Shiite) camp or make them happy.

The nuclear deal was mostly praised by the Iranian authorities. Among them only some hardliners attacked the deal and criticized the negotiation group based on a fact sheet released by the US on the deal. The main focus of the critics is on the sanctions and the method of their termination. Iran demands all sanctions to be lifted immediately after reaching a final agreement. However, the US claims that “Iran will receive sanctions relief, if it verifiably abides by its commitments.” Thisworries the radical conservatives because the preliminary agreement stipulates a drastic decrease in Iran’s uranium enrichment capacity in . It should be noted that a final agreement suggesting a termination or a relief in the sanctions implemented on Iran will also displease an alliance around the Revolutionary Guards-Bazar axis who will lose their privileged status of having keeping in their hands a monopoly of the illicit trade that arose as a result of the sanctions.

It was pointed out above that Iran has no other choice than an agreement with the West. The negotiations during the Ahmadinejad presidency era resulted in six rounds of UN and several individual rounds of EU and US sanctions. The implemented sanctions were initially mainly targeting Iran's nuclear and military activities , but gradually they were extended to cover a large area of Iran’s economic and financial affairs. During Ahmedinejad's first term in office, thanks to high oil prices Iran's income increased dramatically and Iran imported a large amount of basic commodities. It seemed that Iran would not feel much of the sanctions' pressure. However, throughout Ahmedinejad's second term, injecting large oil income to the internal market caused high inflation. Then, the sudden increase in foreign exchanges caused a drastic increase in the cost of living. Under the sanctions production decreased. The economy unable to produce jobs faced the problem of the large number of workers laid off from factories. Life was becoming unsustainable for people.

When masses demanding bread, jobs, and freedom toppled two well-established dictatorships in North Africa, the Iran regime not completely relieved from the aftershocks of the 2009 uprising was naturally worried about another uprising inspired by Arab revolutions. These worries were largely reflected into the presidential campaigns of the candidates in the 2013 polls. Rouhani as the most prominent example of those candidates emphasized that the only way to overcome economic problems was an indispensable deal in Iran's nuclear negotiations with 5+1 group.

From the regime's point of view Rouhani is completely right. Because after a probable deal with the West, Iran's commercial channles will be opened again and imports and exports will return to “normal”. The production system, nearly dead,will recover and international companies will receive a warm welcome to invest in Iran's oil and gas projects. Iran will repair and promote its old oil and gas installations and will be able to extract gas from its largely unused fields in the Gulf. Probably employment opportunities will increase and life will be more bearable, but the domestic and international capital will amply benefit from it.

On the other hand, opposition forces are worried about a possible assault by the regime relieved from international pressure. Rouhani forgot all his promises made during his electoral campaign and most probably will lay them aside in the shadow of the his great victory in the negotiations. The Kurds, Arabs, and Balochis will be executed in the same manner as before and ethnic and religious groups will be oppressed accordingly. However, the regime will honor the middle class discontented with the 2009 polls for their nice choice in 2013 polls, and establish its legitimacy in the eyes of the bourgeoisie. And they will all celebrate hand in hand the agreement in the streets.

This article was initially posted on the web site www.socialistproject.ca