Iran: Revolution of the meek 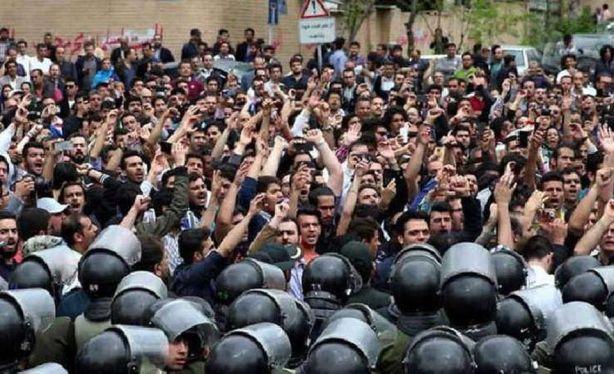 Iran is fast becoming the centre of a storm in the Middle East and Western Asia in general. The United States under Donald Trump started to implement new sanctions on the country on 6 August. On the other hand, demonstrations are roaming the country and have reached the capital city, Tehran. We are publishing below the transcription of the speech made by the Iranian delegate at the Emergency Euro-Mediterranean Encounter, held in Erethria, Greece on 23-25 July 2018.

One of the slogans of the Islamic revolution (“revolution of the meek”) declares that “we will all dine together at the revolution’s table”. It turns out, after the death of Khomeini, all the seats are reserved for the Bourgeois. This re-envisioning of the revolution brought with it new tensions and many opposition factions. “Opening up to the world” and “easing the iron grip of the Islamic state” have been the topics of debate, and the pendulum has swung back and forth between the hardliners (Ahmadinejad, Hashemi, Khamenei) and the reformers (Hatemi, Ruhani) since then. This tension stems from the need to lift the embargoes and improve international trade to overcome the economic bottleneck and the need of the Islamic Republic to maintain its official “anti-imperialist” and anti-Zionist rhetoric, i.e. the ideological pillars of the state. It is this continuous tension that leaves the Iranian people crushed.

Despite the apparent hardliner rhetoric of Khamenei, calling US the prime enemy time after time, he still backed up the reformist Ruhani who proposed to come to terms with the US in the Nuclear arms development. It seems overcoming the economic bottleneck and hence ensuring the survival of the Islamic Republic was prioritized over anti-US sentiments. The unexpected election of Trump, however, dramatically changed the playing field. The close relations of the new US president with Israel, Saudi Arabia and its open hostility to the Islamic Republic is well known. Obama represented a green-light for the reformist politics, but now we have entered a completely new era. The once tried-and-true methods of overcoming the embargoes are less effective with the new stricter embargoes and the Islamic Republic is desperately trying to find new solutions.

At this moment, we see the Ruhani camp trying to appeal to the western common-sense while acting more reserved in order not to alienate the hardliners in government, the revolutionary guards in particular. On the other hand, the recent call by Khamenei might indicate another possible approach: “Let us not teach English to our kids, but instead teach them Russian and Chinese”. It should be noted that there is a very sizable Chinese market in Iran.

Let’s turn our attention to the people, who are no longer welcome at the revolution’s table. These statistics tell the tale: Iran is the biggest importer of Porsche cars in the Middle East, about four thousand bureaucrat-relatives currently live in UK, an estimated 30 billion dollars were smuggled out of the country in the last three months and one third of the population have income below the hunger threshold. The super rich and the homeless increase in number simultaneously. Most of the time, the state cannot even fund relief efforts after natural disasters and stays completely inactive. People, who have been told to sit tight and struggle through the embargoes to achieve energy independence via the nuclear programme are now told to start working at 6:30 in the morning against frequent power shortages.

After the January demonstrations, there are still signs of the will to struggle among the people. Last month, with the exchange rates skyrocketing, people in the Bazar poured to the streets. It was the first strike of the Bazar after Islamic revolution. The increasing exchange rates hurt the people most, since businessman had the opportunity to buy dollars on a discount from the Islamic Republic. Recent times brought one bankruptcy upon another.

There have been two major uprisings after the Islamic revolution. The first one is the green movement uprising in 2009, which was mostly a middle-class action against vote-rigging. Hence the demands were mostly middle-class ones. However, the recent uprising in 2018 had a drastically different character, that of the ignored and impoverished proletariat. It was in this instance that the slogans of “bread, work and liberty”, “no fundamentalist, no reformist, this has to end”, “media plays deaf, sides with theft” were frequently heard. It was here that people demanded a fundamental change and not simple reforms.

In the months leading to these demonstrations, we witnessed smaller protests from teachers, pensioners and factory workers. Sometimes drought-affected peasants would take to the streets. But these individual protests would never lead to something bigger, more unified, until the 2018 demostrations. Even though the spark of the demostrations came from Ahmadinejad supporters, it soon took hold of the recent earthquake victims on one hand and the unemployed on other. This also gave birth to the “women of the revolution square” movement that demanded freedom and gender equality. On the other hand, one cannot miss the widespread pro-US, pro-Monarchy (Shah regime), anti-Palestine and anti-Syria (Assad) sentiments in the crowds. These were clear signs of the ideological bankruptcy of the republic.

Like most European countries, nationalism is also on the rise in Iran. We can see it in three different examples: first Turkish nationalism in the northwest keeps Tabriz from joining the latest demonstrations. Second is the Kurdish nationalism which is similar to Tabriz and keeps Kurdish Sunni people away from the uprising. Third and most important is rising Iranian nationalism against Afghani workers, which repeatedly made itself visible during the demonstrations.

The 2018 uprising was not just about economic problems. Even though the middle-class of big cities didn’t join the uprising, people in the streets had slogans against religious despotism.

In some cities people burned mollas’ schools. This is even more impressive when one considers that such actions usually result in death penalty by the state. The reactions of reformists (including the green movement) and fundamentalists were the same: they labeled the protesters as traitors.

In conclusion, the election of Trump killed the reformists dreams. The degrading economic condition of the masses leaves Ruhani ever more alone, where the hardliners already give hints of a more pro-eastern approach to overcome this crisis. Meanwhile the opposition is in shambles, monarchy supporting, pro-USA, liberals provide all the talking points, while an increasingly pro-USA People’s Mujahedin Party (Mujahedeen e Khalk) holds the most widespread contact with the masses. It is now more vital than ever for the Iranian left to turn back to its anti-imperialist roots. The task is difficult, but the alternative can only bring more misery to the people of Iran and the region.  With the reformist dreams dying, the state went back to oppressing the people to keep them from organizing. The effects of the more strict embargoes will be much more visible in the coming months and we will get to see more uprisings. The absence of an organized left is painful.