Iran is the harbinger! 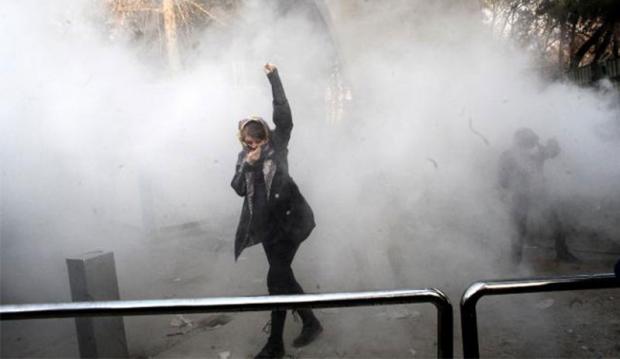 Prepare a mass rebellion against imperialism and capitalism all over the region!

For a new Spring of the Peoples!

The protests that began in the last days of 2017, spread surprisingly to many provinces of Iran, and almost turned into a popular revolt. Its content took the form of a political protest, challenging directly the tyranny of the so-called Islamic Republic, rather than protesting only the high costs of living or the corruption. It’s the main reason why these events are of a different kind compared to the “Green Wave” of 2009, whose demands remained limited to the pursuit of freedom and democratic rights by the petty bourgeois which, by excluding economic class demands, made it impossible to extend the protests to the masses then.

We strongly support the insurgent masses, whose revolt is legitimate as they have the right to rebel against the corrupt exploiters, the so-called Islamic bourgeois and the mullah, who never pay a price arising from the embargo of the imperialists, but instead, live prosperous lives.

Of course, given the political conjuncture of both the region and Iran, and the weakness of the Iranian left, there are many jeopardies that the Iranian masses will face soon. We therefore have to call our insurgent sisters and brothers to:

Do not let the imperialists, Zionists and the reactionary forces of the region to confuse you!

Today, the reactionary regimes of the region seem to support the revolt of the Iranian masses. What a hypocrisy! After trying so hard to kill the revolutionary wave of the Arab peoples, after betraying the Palestinian struggle, after imposing an embargo to Iranian people, these regimes would be the worst allies of the revolt of the Iranian people. They only wish the Iranians be exploited by some other kind of bourgeois. They do not wish an emancipation for the Iranian masses, as they do not wish it for the peoples of their own countries.

Trump, the racist, evangelist, imperialist and insolent boss of the US, can give the Iranians nothing more than what he gives to the latino or the black peoples of the US, or the working class of the US. He can be the friend of the exploiters, the oppressors and the tyrants of the region, not the masses. Netanyahu, the psychopath Zionist and the enemy of the all peoples of the region, can give Iranians what he gives to the Palestinians or to the Falashas. Nothing more!

Build democratic organs of the revolt, in order to move forward!

Especially in the beginning of the protests, the top issue is the establishment of the committees and councils that protect the masses against the eruptive but disorderly action, which will soon be tiring and weakening. Just like a steam engine, these democratic organs will provide the necessary atmosphere for the progression of the revolts.

Build a revolutionary party that has a working class orientation!

The problem with the Iranian regime, is not only the misgovernment by the regime forces. Although being under an embargo, Iranian capitalism, is ultimately a tyranny of capital, in which the 99 percent of the Iranians have no interest in. The final emancipation of the Iranians can be achieved by a social revolution, which will give the means of production to the vast majority of the Iranian peoples, instead of a small group of capitalists and mullahs. This, on the other hand, can be achieved by building a revolutionary party of workers that challenge the capitalist system in a political way, by organizing the vanguard of the Iranian proletariat who will bring other exploited and suppressed sections of the society into the fold.

Let us march together!

Long live the struggle of the Iranian working masses!

Forward for the organization of the revolt!

Forward for a revolutionary party of workers in Iran!

Prepare a mass rebellion against imperialism and capitalism all over the region!

For a new Spring of the Peoples!