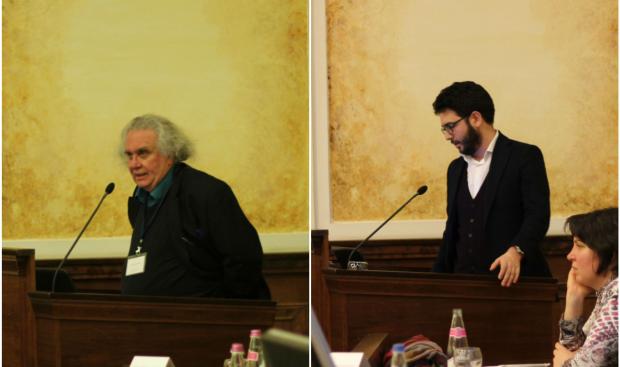 An international workshop titled “Crises and Victims: A Workshop on Refugees, Migrants, and Anti-Refugee Discourses in a New Way,” organized jointly by the Rosa Luxemburg Foundation, the Karl Polanyi Center for Global Social Studies, and Eszmélet journal, was organized in Budapest on February 26-27, 2016. The meeting was held at a critical conjuncture defined by two related developments. First, European governments have been doing their best to refuse admitting refugees escaping from wars in Afghanistan, Libya, and Syria, which started and/or escalated due partly to direct or indirect intervention of the same European powers. Second, xenophobia and racism, which have been important problems in Europe for a long time, have reached an alarmingly high level. In the workshop progressive and socialist intellectuals from various European countries discussed different perspectives on the contemporary refugee crisis and its possible progressive solutions.

On the first day of the workshop a movie (directed by Burhan Qurbani) titled Wir sind Jung, Wir sind Stark (We are Young, We are Strong), which tells the story of the racist-fascist groups’ attacks against the refugees in the Rostock city of Germany in 1992, was screened. A roundtable discussion led by Attila Melegh (Corvinus University of Budapest) with speakers including Annamária Artner (Centre for Economic and Regional Studies of the Hungarian Academy of Sciences, Institute of World Economics), József Böröcz (Rutgers University), Tamás Krausz (Eszmélet journal, Eötvös Loránd University), and Luca László (Foundation for Development of Democratic Rights) was held. One of the important themes discussed in the panel was the relationship between unemployment and precarious working conditions that became the norm in Eastern Europe after the collapse of the bureaucratic workers’ states in 1989 and the growing anti-migrant/anti-refugee sentiment among the workers of Eastern Europe. It was pointed out that millions of Eastern European workers have themselves become migrant workers in Western Europe in recent decades and have been subject to anti-migrant xenophobia there. However, due to the failure of the existing working class and leftist organizations in organizing migrant workers, Eastern European workers see the migrants coming from the Middle Eastern and Islamic countries as their competitors in the labor market and develop racist prejudices against them.

Four panels were held on the second day of the workshop. In the first panel titled “The Current Refugee Crisis in Global and Historical Perspectives,” József Böröcz made an interesting presentation. He stressed the fact that Eastern Europe economically depends on Western Europe. Millions of Eastern Europeans are currently working in the West and the remittances they send every month are vital for the survival of their families and relatives. Böröcz pointed out the fact that growing xenophobia in Eastern Europe is related to Eastern European workers’ perception of migrants coming from outside of Europe as potential competitors in the Western European labor market, who would take their jobs away and also contribute to the depression of wages. In response to a question about the position of the trade unions and the socialist parties on the refugee question, Böröcz pointed to the existing trade unions’ anti-immigrant position and their failure to combat xenophobia and unite the Eastern European and non-European migrant workers in class struggle. In her speech, Susan Zimmermann from the Central European University in Budapest pointed out the striking fact that bourgeois/liberal/pro-imperialist versions of feminism have served anti-refugee xenophobia in Europe by portraying Muslim men as potential sex offenders and neglecting the problem of European men’s sexual offenses against Muslim refugee women. She emphasized the political necessity of anti-imperialist and socialist feminism in addressing the refugee question in Europe in a progressive manner.

In the second panel titled “Political Critique and Political Developments,” Savas Michael-Matsas from the EEK in Greece (Workers’ Revolutionary Party, a founder of RedMed and the Coordinating Committee for the Refoundation of the Fourth International) provided a Marxist analysis of the current refugee crisis and discussed the ways to solve it in a revolutionary way. Matsas pointed out the close links between the ongoing world economic crisis, increasing geographical scope and intensity of warfare in Eurasia, and the aggravating humanitarian catastrophe caused by the refugee crisis. He stressed the striking similarities between the exclusionary and racist attitude against the Jewish people in Europe in the 1930s and 1940s and the hostile attitude towards refugees in contemporary Europe. Matsas also identified two parallel processes going on in Europe. On the one hand, “fortress Europe” has been consolidated in order to block the refugees’ entry to the continent. On the other hand, under the impact of the current crisis centrifugal/nationalist forces/tendencies have strengthened, leading to the erection of many fortresses by nation states within the borders of Europe. The last example of this ongoing tendency is the increasing military buildup along the borders of different European Union member countries for blocking the entry of the refugees from other EU countries. Matsas concluded his speech by putting forward the internationalist unity and mobilization of all exploited and oppressed masses, regardless of citizen-foreigner-refugee divides, against capitalism, imperialism, racism, and fascism as the only feasible solution to the related catastrophes of poverty, wars, and refugee crises.

In the third panel titled “The Current Refugee Crisis from National Perspectives,” Burak Gurel from Koc University in Istanbul pointed out the fact that the Justice and Development Party (AKP) government in Turkey at first welcomed – and even invited- the Syrian refugees to Turkey in order to use the growing refugee problem to call the Western powers and the United Nations to organize a military intervention against the Assad regime similar to the intervention that overthrew the Qaddafi regime in Libya in 2011. As the AKP’s initiatives failed, the Assad regime survived and the Syrian civil war intensified, Turkey has faced increasingly bigger refugee flows, making it the world’s biggest refugee camp with over 2.6 million Syrian refugees as of early 2016. After describing the miserable working and living conditions of the refugees, which force them to flee to Europe despite all the dangers and difficulties involved, Gurel asserted that the Syrian and refugee problems became the AKP’s biggest policy failure even in the eyes of the its own electorate. Rising anti-refugee xenophobia in Europe came to the help of the AKP at this crucial moment. Ready to make deals with everyone to keep the refuges outside Europe, the EU leadership has made negotiations and deals with the AKP government, whose main terms include the EU’s silence about rising repression of political dissent in Turkey, financial aid to Turkey, and the relaxation of the Schengen visa procedures for Turkish citizens. Gurel concluded his speech by pointing to the contradictions of the marriage of authoritarianism in Turkey and xenophobia in Europe.

Interesting and informative presentations were made in the final panel titled “Locals, ‘Aliens’, and Contexts.” Margit Feischmidt presented the findings of her ethnographic research in a rural region of Hungary that has witnessed refugee flows. She examined the contexts in which the local population’s perception towards the refugees shifted from being neutral to xenophobic. Georgios Tsimoris made an interesting presentation on the relationship between the local population and the refugees in the Lesbos Island of Greece. He said that the local population behaved generally friendly towards the refugees partly because their grandparents were migrants/refugees fleeing from Turkey after the Greek-Turkish war in the early 1920s. Since that experience remained to be an important part of the collective memory, the local population’s attitude has remained friendly and in direct opposition to the xenophobia of the fascists of the Golden Dawn organization.

Attila Melegh concluded the meeting with a speech summarizing the contributions of workshop participants and emphasized the need to organize similar meetings and take collective internationalist action against anti-refugee xenophobia in Europe.