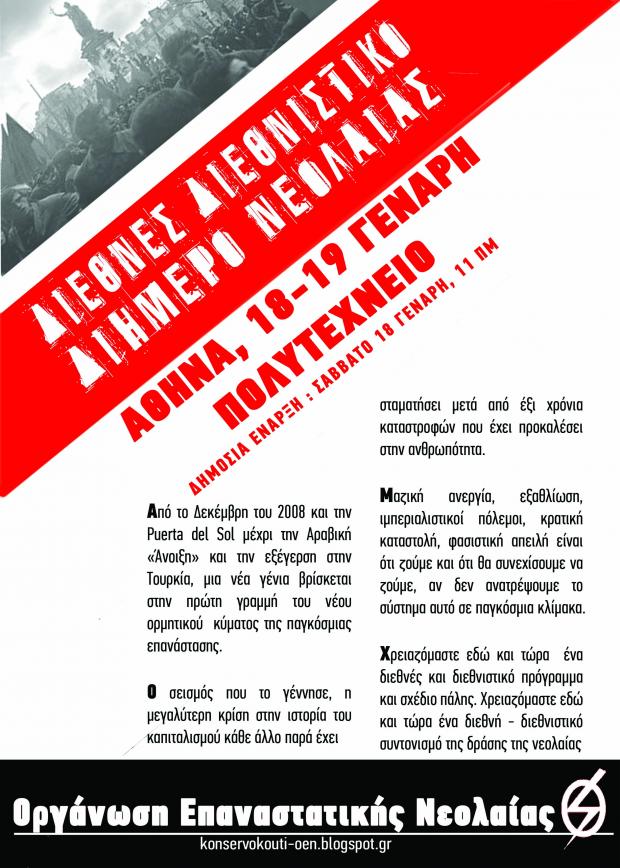 For an international action plan of revolutionary youth againstunemployment, repression and nationalism

The youth of the world is crushed under the pressure of the consequences of the global capitalist crisis. The entire working class, all the exploited and oppressed, is confronted with a social impasse, which is universal for the young generation, the most sensitive and vulnerable part of the population.

Youth unemployment, exceeding 60% in southern Europe, condemns it to social exclusion. We’re not just facing the results of savage austerity and policies as aresult of Troyka memoranda, but also the miserable failure of capitalist governments to manage the crisis of their own system. The unstopable rise in unemployment dynamics in combination with "flexible" labor relations and thedismantling of the “welfare state” produces social conditions of suffocation.

The youth at the same time is at the battle forefront of international classs truggle. From the murder by the Greek police of the 15 years old Alexandros Grigoropoulos and the generation of the December 2008 uprising, to the outbreak of Revolution in North Africa following the self-immolation of the young unemployed Mohamed Bouazizi, youth is on the streets and is accumulating revolutionary political experiences. Youth is ferociously hit by official state repression and violence by paramilitary gangs, such as the anti-fascist rapper Pavlos Fyssas assassinated by teh Nazis of teh Golden dawn in Greece or our imprisoned Turk comrades, detained by the Turkish bourgeois regime, which tries to prevent a new round of uprisings after the recent Gezi Park rebellion– among them our comrade from the Revolutionary Workers' Party (DIP), Cihan Yilmaz.

The Revolutionary Youth Organisation (OEN) of Greece addresses a call to the militant youth forces all over the world who do not seek to reform capitalism but fight for its revolutionary overthrow, who do not obey chauvinist calls of the capitalist classes to "save the fatherland" es, but live with the hope of world revolution, to join us in a fraternal non-sectarian discussion on the prospects for a revolutionary common plan of action. There is no way out from the despair and uncertainty created by the capitalist crisis and imperialism without the beacon of internationalism, without a common worldwide revolutionary struggle for our future.

SATURDAY 18/1
10:30 to 11:00 Attendance
11:00 to 11:30 Projection of filmed material from international youth movement battles: from Seattle to Argentinazo, the Greek December and the "Arab Spring"
11:30 to 12:00 Welcome by the Action Council of the OEN and introduction to International Internationalist weekend
The aim of the International Internationalist Meeting is to discuss revolutionary the experiences of the internationally exploited and oppressed youth from the Greek December of 2008 to the "Arab Spring". These experiences continue and go beyond the battles of the movement against capitalist globalization and war but also individual social battles that took place and are taking place in the meantime.
12:00 to 15:00 National reports of the struggles of youth in the countries of Europe, North Africa and the Middle East
The EU countries, especially southern Europe, are being shocked by giant social battles against the austerity formula of the memorandums in which the youth protagonists, while North Africa is convulsed by revolutions that are currently subverting whole political regimes.
15:00 to 16.00 Collective kitchen
16:00 to 18:00 Discussion on the national reports and generally on the activist and revolutionary experiences of the youth in Europe, North Africa and the Middle East
The background of the explosion of the youth movement is the global capitalist crisis. A whole generation risks of being buried under the social ruins left behind by the system bankruptcy.
SUNDAY 19/1
10:30 to 11:00 Attendance
11:00 to 12:00 Presentation of the main conclusions of Action Council of the OEN from the discussions of the 18th of January and recommendations on the necessary international internationalist youth program
Discussion on the failed international attempts of "rescuing" capitalism, the youth with the workers must enter the vanguard of the battle for organizing and winning the world socialist revolution. We need an international part , a global program and a global plan of action.
12:00 to 14:00 Discussion on the necessary international internationalist youth programme
14:00 to 16:00 Collective kitchen and movie projection
Organization: Organization of Revolutionary Youth (OEN)
Contact: konservokouti-oen.blogspot.gr
konservokouti@yahoo.gr
Tweet