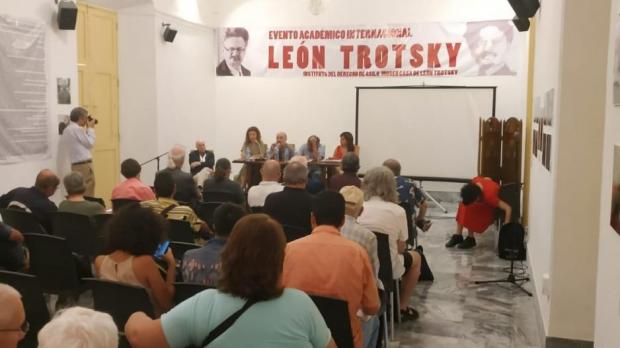 A conference on the historical legacy of Lev Davidovitch Trotsky took place in the capital of Cuba, Havana, in May. The Juan Marinello Cultural Research Centre, the Franz Hinkelammert Critical Social Thought Desk and the Philosophy Department of University of Havana organised this event. In addition to Cubans, many participants from Latin America, North America as well as Europe and Asia were present. The historical importance of this conference lay in the fact that this was the first event taking place in this land of revolution, after the construction of a workers’ state in Cuba and 60 years after the revolution. This call made to revolutionary Marxists of the entire world, at a moment where the conquests of the Cuban revolution as well as the very existence of the workers’ state is under the threat of imperialist aggression and bureaucratic oscillations, this international conference was of extraordinary importance from the standpoint of the struggle against capitalist restoration.
DIP (Revolutionary Workers’ Party, from Turkey) considered this call from Cuba of a special importance and participated in the conference along with a representant from its sister organisation ROR (Renaissance Ouvrière Révolutionnaire, Revolutionary Proletarian Revival) from France. In addition to the speeches delivered by two comrades, we had a stand with the material of our organisations. On that both we had pamphlets introducing DIP and ROR in English and in Spanish, flyers regarding the defence of Venezuela against imperialism, calls to struggle on the occasions of May Day and 8th of March, which we distributed to the international participants as well as Cubanspeakers and the Cuban audience. On our stand, the participants also found 2017, 2018 and 2019 editions of Revolutionary Marxism, the special English annual edition of the quarterly theoretical journal of DIP in Turkish, Devrimci Marksizm, as well as the bilingual theoretical publication of our international current, World Revolution/ Revolución Mundial.
The comrade from DIP, Armağan Tulun, delivered a speech on the second day of the conference. The title of the speech was “Trotsky in Istanbul, Nazım Hikmet in Havana”. The speech was given in Spanish, in order to connect to Cuban participants in their native tongue and then translated to English. Our comrade ended her speech by underlining that it is the utmost duty of the revolutionary Marxists to defend Cuba as a workers’ state against mperialism, capitalist restoration and bureaucracy. The speech drew a great deal of attention and our comrade invited all the listeners to our stand for more information. Especially the emphasis on the defence of Cuba as a workers’ state received a big applause from the Cubans present at the conference.
Comrade Burak from ROR spoke on the last day of the conference on the subject of “Permanent Revolution, Trotsky and Che”. He started with a brief history of the concept of Permanent Revolution from Marx to Trotsky and stressed the fact that the Cuban case is a prime example of Permanent Revolution in work. In order to clarify this point, he made a historical comparison with the Iraqi Revolution of 1958/59. Then he stated several examples of the efforts of the revolutionary leadership embodied in Che Guevara for the world revolution, not least in the support of the Algerian Revolution. He ended his words by recalling how Che showed the actuality of world revolution half a century after the great October Revolution and how it is up to us to show its actuality another half a century after Che Guevara himself.
The closing address of the conference was delivered by one of the Cuban organisers of the event from the Juan Marinello Centre, which was the driving force behind the whole event. The comrade recalled that the dates of this event, a historical first, were no coincidence. The opening day of the conference marked Karl Marx’s birth, while the closing date was that of the final victory of Red Army, founded by Trotsky himself, over Nazi barbarism. After this address, the conference ended with the “Internationale” sang in harmony in many languages of the world.
The organisers of the conference had also planned other events regarding the Cuban Revolution and the legacy of Trotsky. On the second evening of the conference, a screening of an unfinished documentary on the exile years of Trotsky, with the participation of its director, took place. Raw material, containing several interviews with people around Trotsky in his years of exile was used in the documentary and this drew a great deal of interest from all the participants.
After the closing of the conference, Cuban revolutionaries organising the event invited the participants to a trip to the city of Santa Clara. This city, were the most decisive battle of the Cuban Revolution took place also has the mausoleum of Che Guevara and his other martyr comrades in his Bolivian campaign. In addition to the Che Guevara monument, participants also had the opportunity of visiting the monument of the “Ambush of the armoured train”.
The conference, other than very fruitful discussions, provided an important ground to establish strong ties with Cuban revolutionaries in order to defend Cuba against imperialism and capitalist restoration.