International Socialist Center “Christian Rakovsky”: The struggle for life is the struggle to end global capitalism, for world socialism! 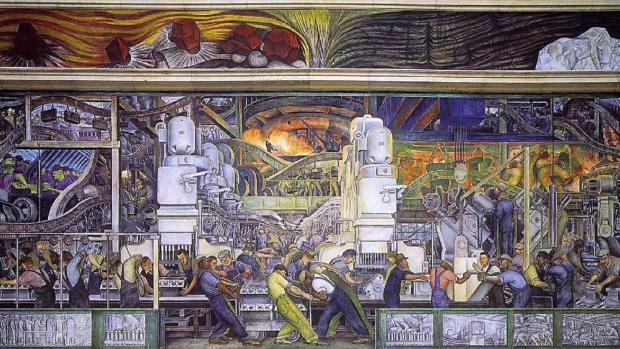 1. In this International Labor Day, May Day 2021, the International Socialist Center “Christian Rakovsky” salutes the international working class and all the exploited, oppressed, discriminated all overt the world fighting back the unprecedented catastrophe facing humanity and nature, produced by this decayed social system in crisis, global Capitalism!

May Day 2021 is a Day of world-wide struggle for Life threatened by the destruction of the natural environment by capitalist greed of the multinational companies of globalized capital leading to the humanitarian tragedy of the Covid 19 pandemic and climate change.

In just one year more than 3 million human lives were lost by a pandemic, which, despite the discovery of vaccines, is far away from its end, both in Global North, in the United States and particularly now in Europe, and in Global South. The horrendous figures of hundreds of thousands of new cases and the thousands of deaths every day in Brazil, in Latin America, the Continent most hit by the pandemic, and in the India in Asia show the transformation of these huge countries to hotbeds for the emergence of new variants, possibly more lethal and vaccine resistant, threatening the entire world..

It is well established that the infamous capitalist globalization of the last decades had destroyed forests, ecosystems, immunological barriers producing for the early1980s an “epidemic of epidemics”(HIV, Mers, Sars,-1, H1N1, Ebola, etc) culminating in the Covid 19 pandemic, which even put under control, would be followed by another disastrous pandemic. The health crisis was compounded by its criminal mismanagement not only by the Trump administration and Bolsonaro’s government madness. It involved most capitalist governments all over the world as they subordinated health to the priorities of capitalist economy, without necessary safety protocols in labor sites and transport, necessary lock-down, mass tests, tracing etc and with national health systems nonexistent, ill equipped or destroyed by Neo-liberal policies. The vaccine nationalism and wild competition by the Big Pharmaceutical companies has created a chaotic situation preventing the achievement of mass immunity and spreading skepticism and obscurantism exploited by all kinds of obscurantists, far right groups and a threatening rise of fascism.

The only line of resistance to the catastrophe was and is the heroism and self-sacrifice of hospital workers, nurses and doctors. The Covid 19 pandemic proved in the most tragic way that Capitalism in its historic decline is incompatible with the most urgent and direct needs of the actual life process.

“Only the people will save the people”, says a popular slogan of the workers movement in Greece. The struggle for life makes urgently needed the most dynamic mass mobilization for the imposition of the necessary safety measures and protocols, expropriation of the patents, of Big Pharmaceuticals and private clinics, without compensation and under workers control, and massive expansion of the public health sector, well equipped in personnel, Intensive Care Units and medical technology. Centralization of all necessary resources and planning to establish health care as a universal free good.

2. May Day 2021 is an International Labor Day of struggle against the extreme poverty, social misery, and mass unemployment spread by the escalating global capitalist crisis.

More than a decade after the Lehman Brothers collapse in 2008, followed by the implosion of finance capital globalization and a new Great Depression, on the eve of the Covid 19 pandemic, it became already clear that the global capitalist crisis not only had not ended but it plunged into new depths, despite the extra-ordinary monetary and fiscal policies introduced by central banks and governments combined by savage “austerity” measures imposed to the popular masses. Then, the eruption of the coronavirus pandemic, the manifestation itself of a catastrophic crisis in the social metabolism between human society under capitalism with Nature, not only had interacted and compounded the post-2008 global capitalist crisis but triggered a gigantic qualitative leap of the crisis into a new level, into a changed world situation. As a new dynamic factor, it plays a decisive role in sharpening the international class struggle, in national and social conflicts, in the political crisis in every country as well as in international geopolitical confrontations and clashes, particularly between US/NATO imperialism with China and Russia.

A global systemic breakdown actually is in process driving wars, social explosions, and the emergence of revolutionary situations.

Emergency monetary and fiscal measures by all capitalist governments and central banks have by far superseded their interventions after 2008.

At the center of global capitalism, the US Administration, particularly under the newly elected President Biden and the Fed, spread gigantic sums in trillions of US dollars, equivalent with one quarter of the annual GDP, in other words at the level mobilized during the Second World War!

Desperate times need desperate measures. The dramatic reversal of Reaganomics that the Biden Administration tries to make to save the system it cannot reverse the course of history to return to the times of Roosevelt in the 1930s or of Lyndon Johnson in the 1960s or of the post-war Bretton Woods Keynesian Settlement in 1944. The entire world, in the last 80 years, has profoundly changed and the place of the US in it. Still the world hegemonic power, US capitalism, the highest point reached historically by capitalist development, is now in advanced decline, dependent from a declining global capitalism in crisis, and under the pressure of China as rising economic challenger. The attempted reversal of economic policies at home, combined with a forcible reassertion of US supremacy in a world in turmoil will bring not a relative stabilization but more chaos both at home and internationally, at the metropolitan centers as well as to the periphery, the Global South.

The Global North and, particularly, the already devastated Global South faces in the short term a “pandemic of debts and bankruptcies”, tied with a new tsunami of mass unemployment. Even the IMF, the World Bank ask the governments to keep indefinitely supporting monetary policies. The former Fed Chair and currently Treasury Secretary of the Biden Administration Janet Yellen warns that in 2021 “more 150 million people will face extreme poverty”, starvation.

3. Social inequalities have immensely grown and social polarization intensified during the “perfect storm” of the pandemic and global crisis. Although initially the |Covid shock led to a relative, temporary pause on workers and popular mobilizations, soon unprecedented mass mobilizations erupted like the multiracial Black Lives Mater movement in the US against the murder of George Floyd and police brutality or the mobilization of hundreds of millions of poor Indian farmers against the privatizations schemes by the fascist Modi government.

We salute the Black Lives Mater inspiring struggle, the Amazon workers fighting against their inhuman working conditions and for unionization, the poor peasants and workers in India, the rebellion in Paraguay, the mass movements in Brazil, in Argentina, in all Latin America, in Africa, in Asia, and the Middle East.

We salute the renewal of the Hirak Movement in Algeria, the continuing rebellions in Lebanon, Iraq, and all over the Middle East and North Africa. Particularly, we salute the heroic Palestinian people fighting against the Zionist apartheid settler State. Down with Zionist colonialism! For the right of national self-determination of the Palestinian people, for the right of return of the refugees! For a united, free, democratic, secular and socialist Palestine, where Palestinian Arabs and Jews will live peacefully together with equal rights and dignity over the entire territory of historic Palestine! For a Socialist Federation of the Middle East!

4. We salute the rising wave of struggle in Europe for bread, jobs and freedom, against police brutality, racism, islamophobia, antisemitism, against State repression and the far right, especially in France, in Spain, Portugal or Greece.

On April 21st 2021, 60 years after the coup of the French generals in Oran, Algeria, and 54 for years from the military coup of the CIA colonels in Greece, the outrageous Call by 20 retired French generals, claiming the support of another 1000 active officers, are threatening for a new coup and a civil war against the “Islamists” and the “hordes” of the proletarian neighborhoods. Marine Le Pen, full of ambition to become President of France in the elections next year, publicly supported them, revealing the real face of the Rassemblement National/Front National. The rise of the far right and fascism, the specter of dictatorship and civil war in the advanced capitalist imperialist countries cannot and should not be underestimated. Already the fascist assault on the US Congress Capitol on January 6, 2021, at the center of global capitalist has demonstrated it. Now, in a different form and way, the forces of a brutal counter-revolution raise their head at the heart of Europe. The workers and popular organizations have to organize, fight and defeat the fascists, Lepenists and militarists.

Build a class struggle United Front of all workers and popular organizations against fascism and the far right. Build workers self-defense guards. Smash fascism in every neighborhood, every city, every country! Smash the police State of the capitalist class, for the expropriation of capital, for workers power, and a socialist way out from the crisis!

5. The global capitalist crisis and the pandemic have proved the total failure of the imperialist EU project by the disintegrating centrifugal forces of imperialist and nationalist antagonism. The EU, which condemns to hunger, social despair, and unemployment the European popular masses, at the same time it builds concentration camps and a “Fortress Europe” against migrants and refugees, the victims of European colonialism, of predatory imperialist policies and wars.

Close the concentration camps for migrants! No borders! For the unity of all proletarians in Europe, “native” and migrants!

Down with the imperialist EU, for the expropriation of capital, for workers power and the socialist unification of Europe from Lisbon to Vladivostok!

6. May Day 2021, the International Labor Day is a day of struggle against imperialist war!

The withdraw of US troops from Afghanistan, after 20 years of a barbaric war aggression does not mark the beginning of a period of international peace,.It marks only a new defeat for US imperialism in an endless war effort, following a similar fiasco in Iraq and Syria, and its past strategic defeat in Vietnam. The new US administration escalates its standoff with China and Russia. It rebuilds NATO’s unity for aggression, military interventions and “hybrid” wars from Ukraine and Caucasus to East Mediterranean, Syria, Libya, Yemen, and the Gulf, from Africa to South China Sea and Taiwan.

The fragmentation, NATO-isation, and subjugation of the entire former Soviet space and the re-imposition of imperialist control on the Middle East and Iran by the US-Israeli-Saudi- Gulf emirates axis are interconnected parts of a strategy to defeat and recolonize China, to re-establish the crumbling imperialist world order. The current US-NATO imperialist war drive and anti-Russian and anti-Chinese war mongering are threatening to engulf humanity in a global catastrophic conflagration.

War against the war of the imperialists!

Down with bourgeois chauvinism! For proletarian internationalism!

For a revolutionary International of the proletariat and the oppressed!