International Declaration: Let's conquer the abortion right throughout the world 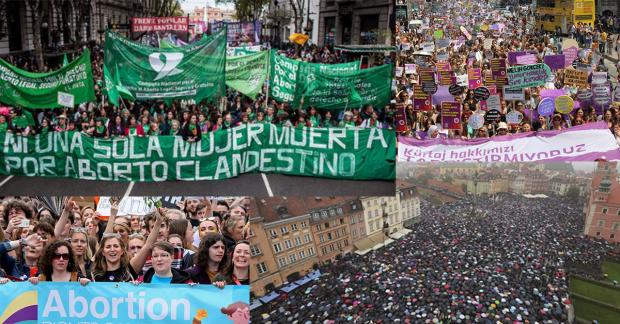 Struggles on the right to abortion on demand are being waged around the world, from Poland to Ireland, from Argentina to in all probability very soon the United States. The draft law being debated in the Congress in Argentina is, at this point, the greatest test for the women’s movement and others fighting for women’s emancipation. The draft law passed its first reading in the lower chamber of Congress earlier. It will now be voted in the Senate tomorrow, the 8th August 2018.

The Emergency Euro-Mediterranean Encounter that convened in Erethria, Greece on 23-25 July 2018 passed, unanimously, a resolution that defends abortion as a right for the women of the entire world. In support of our Argentine sisters, we publish this Declaration on the eve of the voting in the Senate.

The huge development the women's movement has acquired, under increasingly radicalized expressions - direct action, strike, etc. - is inseparable from the general tendency to popular rebellion that is running the world, spurred by the world crisis.

Everywhere, the mobilization of women for their rights is accompanied by demands against labor precariousness and social misery, and, in many countries, for political demands against capitalist governments.

It is acquiring a political projection everywhere: either when it raises the Republic in Spain, the popular rebellion against the capitalist theocracy in Iran, the struggle against the clerical-right-wing government of Poland, or the fight against Macri and Temer in Latin America. The intertwining of the feminine mobilization with the class struggle of the workers and the intervention in the political crisis in development anticipates an international popular rebellion.

The struggle for the abortion right is a clear example of this tendency. The historical method of the strike was taken by Polish women, who pushed back the clerical government in its attempts to restrict access to legal abortion. In the 'catholic' Ireland, the legalization, at first, of abortion was pulled off in a massive referendum by 70% of the voters. Everywhere, the abortion right is repressed by religious institutions political reaction.

In Latin America, a new movement is on the rise to attain the right to abortion. In Argentina, the country of the Pope, the sanction of abortion achieved half sanction in Congress, as a result of a mobilization of unprecedented scale, which forced a dozen deputies to change their negative vote. The huge mass mobilizations for legalization are combined with a deep crisis of political regime. In Brazil, Paraguay, Uruguay, Mexico, Colombia and different Central American countries, struggles for legal abortion are emerging.

The Catholic Church is everywhere active in suppressing the right to abortion. There is an organized political action of the Church to separate the workers' movement from this struggle, through the intervention of the trade union bureaucracy, various sectors of nationalism and the "villeros priests". In Nicaragua, Ortega's government has granted the clergy the legal prohibition on abortion. In addition, union bureaucracies and "social movements" are Vatican agencies. Evangelical churches are also intervening (as in Brazil where they proliferate as fungi) to contain the development of the tendency to social rebellion.

In countries with a predominantly Muslim population, the rise of sectarian and takfiri movements, as well as more modern forms of political Islam such as the theocratic despotism of Iran or the emerging Rabiist despotism of Erdoğan in Turkey, create, to differing degrees, an overall environment in which all the rights of women are brought into attack. In Iran, even women’s challenge to the legal obligation to wear the hedjab is being repressed. In Turkey, where a restricted form of abortion has been legal since 1982, Erdoğan has called it in question by likening it to a massacre, but the government refrained from attacking the legal arrangement in place under the pressure of the impressive wave of protest that swept the big cities. In countries such as Saudi Arabia, the new face of Wahhabi fundamentalism is embellished by cosmetic changes, such as the right to drive posh cars for the women of the royal family and the upper rich crust of society, while the regime denies ferociously all other rights.

Donald Trump has initiated, in the United States, the counter-offensive to wrest the American people the right to abortion, conquered for forty five years ago. For that, he intends to appeal to the Supreme Court, of right-wing majority. This counterattack responds to the purpose of initiating a stage of political reaction in that country and in the rest of the world. The workers must note that the attack against the rights of women is the tip of the ball of an offensive against democratic liberties and against the working class.

At a time when the women's movement tends to overflow the framework of the capitalist state with bolder political demands, we call to a socialist organization of working women. The conquest of formal rights for women has been accompanied by an increase in social inequality, social discrimination and the social misery of the immense majority of the female world; only a minority of women have advanced socially through the co-optation of large corporations into their managements and directories. The emancipation of women is, in short, the political task of a proletarian revolution. In opposition to the slogan of "empowerment" of women, we propose the taking of power by the working women, through the class struggle of the working class.

While, in the directories and managements of corporations and financial institutions, a ruthless 'gender struggle' is waged for the taking of the command of capitalist exploitation, we call for unity, respect, collaboration, fraternity, fellowship and to share the sacrifices of the men and women of the working class, in a struggle for the abolition of social exploitation, class violence and wars.

For the independence of the women's movement from the guardianship of the professionals and politicians of the capitalist class and for the unity of action with the working class! We call on the working class to support the struggles for women's demands and for the abortion right, and to turn those struggles into a rebellion of the entire people. Only the worker who fights hand in hand with women, for the sake of women, can claim a class consciousness.

We call the women in struggle to become socialist militants. For the socialist organization of the working women and for the construction of an independent political party of the proletariat.

For the right to legal, safe and free abortion. For a socialist education, which is the only one that offers a human perspective to couple relationships!

For the separation of the Church and the religious institutions fromthe State and for the confiscation of the immense properties of the Vatican and the churches throughout the world!

For the withdrawal of Muslim religious institutions from political life, from the general legal system, from education and from meddling into women’s lives on the basis of a proletarian secularism, explaining to workers that religious and sectarian divisions pit workers against each other and serve the purposes of our common class enemy, the capitalists!

For the international unity of action of the women's movements in struggle!

For revolutionary workers parties and for a Workers' and Socialist International!