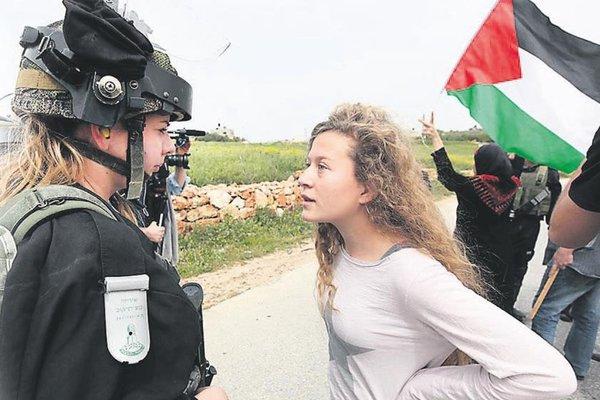 Together with tens of thousands of activists and organizations, we join the international campaign demanding freedom to the young 16-year-old Palestinian girl Ahed Tamimi and all Palestinian political prisoners.

On Tuesday, December 19th, the Israeli occupation forces arrested in Nabi Saleh, a West Bank town, the young Ahed, her mother Nariman and her cousin, Nour

These arrests are among the hundreds that have been intensified in the occupied territories as a result of Donald Trump's decision to move the American embassy to Jerusalem, and to recognize this city, traditionally a multi-religious symbol, as the exclusive patrimony of the State of Israel.

The imperialism´s decision has opened a new international crisis. The settlers who occupy the area located 20 km from Ramallah since 1977, the Halamish, are extending their territory with the support of the army and now, leveraged by the imperialist support, they have advanced on new sources of water supply in West Bank territory.

The viralization of the video where the girl Ahed Tamimi is seen slapping the soldiers posted in the yard of her house, who the day before had badly hurt one of his cousins ​​by shooting him in the face, has dealt a blow to the image of the mighty army of Israel. The Tamimi are a family of Palestinian activists and leaders of the new generation of fighters who resist Israel's occupation policy.

Ahed is the symbol of the resistance and involvement of young Palestinians in the struggle for national recognition and against territorial occupations. As every Friday, the inhabitants of her village, with the children as protagonists, march to protest against the occupation protected by the Israeli soldiers. Of those mobilizations is registered the image of Ahed at the age of 11, challenging a soldier armed to the teeth after they came to arrest her brother.

The statements of the Minister of Education of Israel, Naftalí Benet, demanding that the girls finish their days in prison, or those of Defense Minister Avigdor Lieberman - a man who advocates an Israel without Palestinians- threatened: "Everyone around her, not only the girl, but also your relatives, will not escape what they deserve", are the testimony of the virulence of imperialism and the State of Israel towards the unarmed and starved Palestinian people.

In the face of this new Zionist onslaught against the Palestinian people, it is fundamental to join forces at the international level to demand the freedom of Ahed and all political prisoners

We repudiate the persecution of Palestinians by the Israeli government and the arbitrary arrests.

Imperialism out of the Middle East

Israel out of Jerusalem and Palestine! Down the racist colonialist state of Israel!

Freedom to Ahed Tamimi! Freedom to all Palestinian political prisoners!