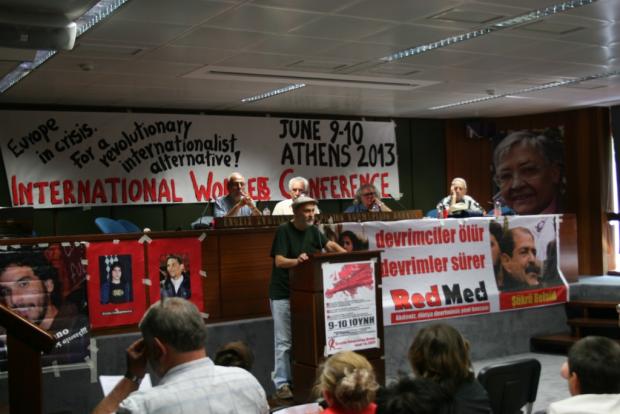 The International Conference on “Europe in crisis: for an internationalist revolutionary alternative”, following the initiative  taken in December 2012 by the  Coordinating Committee for the Refoundation of the Fourth International (CRFI), has successfully taken place in Athens, Greece on June 9-10, 2013, hosted by the EEK, Greek Section of the CRFI.  They participated in the debates and/or brought their messages of support, representatives from over forty(40) revolutionary and anti-capitalist political parties, organizations, social movements, combative trade-unionists, collectivities of workers’ and citizens groups of struggle and individual militants from four(4) continents and twenty(20) countries.

The participants of this Workers’ Euro-Conference intervened also, with their own stand and contributions in discussions, in the Alter Summit that took place in Athens on June 7-8, 2013, and participated, with an independent contingent in the All European Demonstration of June the 8th in Athens.

The list of the registered participants includes the following

Portugal: Raquel Varela, from the group around the journal Rumbra spoke to the Conference via Skype

Britain: The Journal of Socialist Theory Critique. Two members of the Editorial Board were present, and the editor of the journal Hillel Ticktin sent a recorded contribution on the “Recent developments in the Capitalist Crisis” that was broadcasted during the Conference.

France: the group L’ Etincelle in the NPA has sent a message of greetings

Denmark:  Jette Kroman, from the Red-Green Alliance (in personal capacity)

Poland: M. Karbowska from the Polish Anti-capitalist Left, Grazyna Durkalec from the Citizens Group in defence of homes against privatization

Romania: Ana Bazac from Criticattac spoke to the Conference via Skype

Ukraine: a delegation fromthe political organization “Against the Current”

Austria: a militant from the Alter Summit in personal capacity

Delegates from Albania and Bulgaria, although they have sent their greetings to the Conference, were prevented by objective problems to participate

Russia: Iosif G. Abramson, member of the Executive Committee  delegated officially  by the Russian Party of Communists( RPK), Daria Mitina leader of the  Russian Komsomol and leading member of the Left Front of Russia, the Association of Marxist Organizations(AMO) with its two vice-chairpersons, Tatiana I. Filimonova, head of the Plekhanov House Foundation and the Academician Pr Mikhail Konashev  ( who sent a pre-recorded contribution  for the Conference), S. Gafourov and M. Rubinchik, from the movement Alternativyi.

Technical reasons have prevented a leader of the “Stop the War against Iran” Campaign to participate too.

Tunisia: Rym, member of the youth and women movements

After a rich debate, during two days, the Conference has voted unanimously the programmatic points and common international campaigns (for the cancellation of the debt, against unemployment, against fascism, racism and State repression, against imperialist interventions in the Middle East, Asia, Africa, and Latin America etc.)  proposed in the Appeal for the Conference as well as in the main International Report presented by Savas Michael-Matsas (EEK) in the opening session, within the internationalist perspective for a struggle to bring down the imperialist European Union and for the socialist unification of Europe.

The Conference has decided that the Presidium will finalize the formulation of this program and present it to all participants to sign it.

A special motion on Turkey was presented and voted unanimously.

A special motion on Tunisia was agreed to be elaborated by the comrades present in the Conference, and involved in the struggle in that country to be presented by e-mail to all participants .

A special motion was agreed to be drafted and ratified for the liberation of the political prisoners in Russia.

The Conference concluded by singing the Internationale in all the languages of the participants.