Implications of the European Parliament elections: the crisis of the German bourgeois democracy 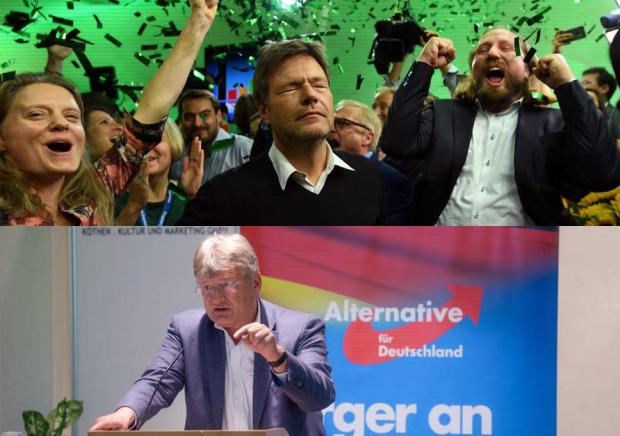 We continue our series on the European Elections of 2019 with an article on Germany written by Kurtar Tanyılmaz after eight articles about the results in Hungary, Romania, Greece, Italy, France, Nordic countries (Sweden, Denmark and Finland, Poland and Spain.

When compared to previous elections, the recent European Parliament (EP) elections, which have been held in the 28 European Union (EU) member countries between the dates May 23rd -26th, had a remarkably high voter turnout rate (51%), out of a total electorate of 400 million voters. Influence of the pre-election call for “no vote for the nationationalist and racist parties” on the voters seems to have played an important role in boosting that high turnout. However, it neither helped the center-right (conservative Christian democratic parties mostly) and center–left (traditional social democratic parties) recover from their long-lasting decline nor impeded the rise of liberal, green, and racist-national parties.

That tendency manifests itself also in Germany. In Germany, the EP election voter turnout reached 61.4 percent, a 13-point increase compared to the elections in 2014. Despite losing 7.5 points, the major coalition partner CDU won the election with 22.6 percent of the vote. That was one of the lowest vote shares the Party has ever received. The CDU lost 6 seats out of 29, and will thus be represented with 23 seats in Brussels. Getting its lowest vote share since World War II, the SPD faced a landslide defeat; its vote share and the number of its EP deputies fell, respectively, from 27.2 to 15.8 and from 27 to 16 relative to 2014.

The Green Party, on the other hand, has become the second most-voted party for the first time in a nationwide election by increasing its vote share more than double, from 9.8 percent to 20.5 percent. The number of seats the Party holds at the EP increased from 11 to 21.

Leaving aside the fact that the Left Party (Die Linke), which has been at the forefront of the so-called “opposition”, did not manage to leverage the vote losses of the coalition-partner parties, it had the lowest vote share (5.5 percent) since 2007 when it was established.

The racist and proto-fascist Alternative for Germany (AfD) having been expected to receive a high vote total also in the EP election increased its vote share from 7.1 to 11 percent since 2014, and thus became the fourth most-voted party. That result can be deemed a success for the AfD, which will be represented with 11 deputies at the EP. That the AfD had received 12.6 percent of the total votes cast in the general election held in 2017, however, should not deceive us into believing that the tide of the far-right is on the ebb. That the Party retains a relatively stable vote share in the former East Germany, especially in the states of Brandenburg and Sachsen, of which the constituency consists mostly of the working class people, shows that the AfD still has a strong voter base.

The Greens won, did the AfD lose?

The results of the EP election indicate that the “grand coalition” governments having been formed collaboratively by the center right and center left is no longer a politically viable option as German parliamentary system loses its integrity, and that German proletariat has become disillusioned with reformist parties, which have for years been implementing anti-environment and anti-working-class policies.

As for the Greens, the youth (36 percent of the total voters under 30 years old) disillusioned with the center right and center left had a decisive impact on the increase in the number of votes they received. It seems that the disappointment with the way in which the SPD and the Left Party has dealt with the high-rents-related housing problems and environmental issues paved the way for the youth, especially those living in the large cities, to tend to vote for the Greens. The latter is also arguably a tangible manifestion of the concerns with finding an antidote in a parliamentary way to the rise of the far right. That the AfD received less votes compared to the far-right parties in other European countries in the EP election can hardly be construed as a victory. That is because the AfD is a new political party in comparison to its counterparts in Europe that arrived on the political stage lately and timidly in part due to the ongoing effects of the country’s Nazi trauma. However, even though it is a latecomer, beginning to receive votes from the German bourgeois and middle classes in cities like Munich as well as in the states of the former East Germany implies that the Party may gain an upward momentum. Public surveys already suggest that it is highly possible that the AfD may win the state elections to be held in fall in Brandenburg, Sachsen and Thüringen.

What is to be done?

It could be stated when the EP election results are interpreted with a specific reference to the German context that a string of issues, such as the prolonged stagnation of capitalism, deteriorating working conditions, rising rents, soaring defence expenditures and environmental degradation, which stoked the rise of the AfD contributed also to the resurgence of the Greens. It must also be added that the latter is coupled also with the indignation against Die Linke which stems from the years-long right-wing policies the Party has carried out in the cities, where it has been either seated in the municipal councils or in charge of the municipal administrations.

That situation raises the following question: Can we expect that the Greens will overcome the deepening social inequalities and unhesitatingly articulate the working class demands in the face of the escalating class struggle? The Party’s recent history, which has been marked by a political orientation in the guise of “libertarian left” focused on the improvished “middle class” and confined to addressing the climatic, environmental and identity issues, makes impossible to give an affirmative answer.

The Green Party itself which is regarded as an alternative to the incumbent coalition government has been complicit in the rise of the far right. It is a pro-neoliberal-market-policies party that has remained silent on the austerity measures imposed by the EU, and that even tried to burden the working class with the cost of environmental degradation by proposing to levy a CO2 tax on “citizens” as a solution. That Party has mostly helped the government pass the authorizations for use of German military forces in the Balkans and Middle East to re-shape those regions in line with the NATO’s imperialist schemes. When the Party has been involved in a coalition government, it has never challenged German energy companies and refrained from adopting a consistent policy concerning withdrawal from coal or nuclear energy. The Green Party, as coalition partner of the SPD, has also imposed austerity measures code-named Hartz IV “reforms” on German working class. The Greens, which has also never followed a coherent policy regarding immigration, Palestinian question and armament is, in the final analysis, an organization that dances to the tune of German bourgeois state and imperialism. It is therefore futile to expect that the Greens would be an antidote to the rise of proto-fascist parties like the AfD.

Time is running out for the socialist left to build a political alternative that will gravitate the youth who has become politicized increasingly in the face of the ever-deepening crisis of the EU, burgeoning proto-fascist movements and environmental degradation. We have to tell the SPD- and Die Linke-affiliated workers, public servants and young people that the EU is an apparatus used by the European bourgeoisie to realize its capitalist and imperialist goals; that the continent-wide soaring social inequalities are the outcome of the assaults against the working class; that xenophobia accompanied by the glorification of the German nation is a dead end; and that environmental degradation and social problems of a similar kind are primarily class issues which can be solved neither by a “Green New Deal” nor by social reconciliation. We therefore need to convince the youth preoccupied with the future of the Earth that the fate of the world is inextricably interwoven with waging an anti-capitalist struggle that will prioritize the problems faced by German working class.

That nationalization has become a demand articulated and debated by workers and young people as a solution to the housing-, climate- and economy-related problems is by itself a sign that German society has a potentially high anti-capitalist orientation. Socialist left would be able to attract both the youth and AfD-voters into its ranks to the extent that it embraces an anti-capitalist and internationalist political strategy, which is independent of bourgeois politics. The EP election serves as a vital warning for the socialist left to immediately take the necessary steps.