Imperialism is weaving the nets of the Third World War 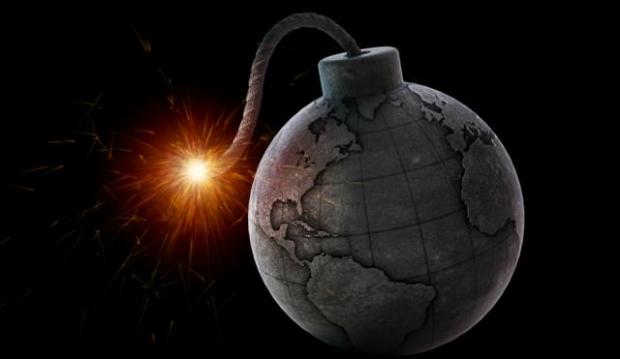 This article was originally written in Turkish and published in the October issue of Gerçek, the central organ of the Revolutionary Workers' Party (DIP). It was later slightly updated and translated into English by another comrade.

“Imperialism is engaged in digging foxholes because of its deep concerns about the future. The most important factor that determines world politics is the US-led imperialism’s  ‘encirclement-isolation’  policy against Russia and China. Because of this, whether it is a provocation in Georgia or in Ukraine or any other scenario in the future, whether it is a tension in the South China Sea or North Korea’s striving to arm itself, the imperialist world would be ready to pour its destructive forces on Russia and China, in case those countries cause trouble. Even if the current crisis in the Middle East could be overcome today, this will be just a dress rehearsal for a conflict that would break out in the near future.”

This long quotation is from the appeal of the Revolutionary Workers’ Party (DIP) under the title of “War against war! Turn the world war into revolutionary class war!”, a resolution  accepted at the First Extraordinary Congress in February 2016 in order to discuss the political attitudes toward the currently concrete, tangible danger of World War Three. All that has lately unfolded has proven the actuality and burning quality of the Revolutionary Workers’ Party’s call.

After the end of the ceasefire declared on September 12th and lasting only a week during which it was violated for many times, the tension between the US and Russia has escalated more than ever. On October 1st, the US State Department spokesman Mark Toner declared that the relations between Washington and Moscow were attached to a life support unit. In her statement on the same day, Toner’s colleague in Russia, Maria Zaharova said “if the US administration changes its methods in Syria and attempts to strike the Damascus administration and Assad directly, this will trigger tectonic consequences, a big earthquake in the region.” A big earthquake? It seems that as the siege of Aleppo by Assad and Russia is becoming more and more intense, the tension between the US and Russia will be more and more tangible. It is well understood that if the Armageddon has not occurred yet,  it is only due to the honeymoon between Putin and Erdogan. It is doubtful how long this alignment would last.

Also the other tensions in the Middle East bear potentials of dragging the big powers into the region immediately. After the launching of rockets on US warships by the Shia Houthis, who hold power in Yemen but are under Saudi Arabian attack,  the retaliation by US warships against this by striking the radar bases was an open sign for such a potential. And not to forget the Chinese warships that appeared at the Syrian shores as well as the Russian warships that are being monitored by NATO in the Mediterranean Sea.

On the other hand, NATO is deploying armies at the Russian border. The soldiers of 20 NATO countries which have no immediate border to Russia have been gathered in garrisons in Latvia under German, Lithuania under Canadian, Estonia under British and Poland under US leadership. Also very important is Russia’s statement of suspension, justified by the US’s hostility, of the agreement on nuclear disarmament projecting disposal of plutonium reserves.

The tension in the east of Asia between the US and South Korea, on the one hand, and Russia and China, on the other, is going on. China, which is protesting the US deployment of rocket defense system near the border of North Korea, justified after North Korea’s nuclear weapon tests, is determined not to step back. A short while ago, in an article published by the official media of Communist Party of China, it was stated: “if the US and South Korea threaten the strategic security of the countries in the region which also includes China, they will pay the price for that as well as facing retaliation.” The Pacific Navy Commander of the US, Admiral Harry Harris, on the other hand, ordered in his speech to his soldiers: “be prepared as if we were entering a war against North Korea tomorrow.” (emphasis)

The US’ allegation that North Korea’s nuclear weapon tests are a threat to security is complete hypocrisy. There is only one country in the whole history of the world that used a nuclear weapon in a war, and it is none but the US themselves. There is no bigger threat to the humanity than the US, which has deployed alone in Turkey, in the Incirlik military base, more than 50 nuclear bombs, and who knows in which countries how many bombs they have deployed as well. Likewise, it is again imperialism that is escalating the tension in Syria. Who would believe the US is defending the lives of innocent people when the US themselves are supporting the sectarian, takfiri bands surreptitiously and striking the Syrian Army “mistakenly”? The only thing the US would defend is the interests of imperialism in the region, the only thing the US would ever think of is to gain positions against Russia in the region.

The fact that the world economy has entered the Third Great Depression, the deepening of international competition as a result of this crisis, the rise of all sorts of reaction, barbarism, and fascism is maturing the dynamics of a new world war. In this perspective, every attempt of the US to isolate and encircle Russia and China bears the potential of igniting  a great catastrophe. Under these conditions, it is highly crucial to have clear and consistent policies against imperialism. Of course, neither in Russia nor in China exists a regime that can be followed by the working class of the world. Nonetheless, this cannot justify remaining neutral between US imperialism and these forces. The cost of the pacifist policy “Neither Sam nor Saddam”, of remaining neutral  between the US and Iraq was the massacre of one million people and the Middle East’s convulsion in the grip of takfiri, sectarian barbarism. Today, the cost of similar mistakes on the verge of a bigger war would be even higher.

On the international scale, the US and the European imperialism is in the center of reaction. The forces which are leading the world into a disaster step by step are these forces. Peace and tranquility may not be visible on the horizon. But hope has not disappeared yet. The road to opening an equal, free, and peaceful future for the peoples of the world is to defeat the imperialism. But to this end everyone should do their part. In Turkey, to struggle against our bourgeoisie who collaborate with the imperialism, to ensure that Turkey separate from NATO, to struggle until there is not even a single imperialist military base, not a single nuclear weapon left, to build the peoples’ friendship in the struggle against the imperialism fall to our part. The Revolutionary Workers’ Party (DIP) raises the call  this struggle!