Healthcare, service, and public workers strike in support of anti-racist popular revolt in the USA!

by United Front Committee for a Labor Party
July 23, 2020 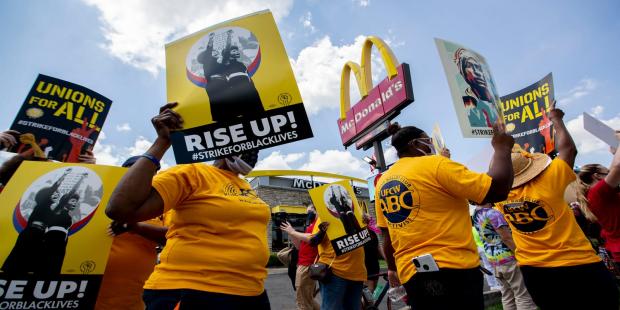 We have lent our support and ideas to the anti-racist popular revolt numerous times in these pages. We have pointed out to the absence of organized labor as a whole (that is, beyond notable individual examples) from the scene as a major obstacle, and accused the union bureaucrats for stifling rank-and-file activity for the fear of this sort of activity getting out of their hands. The participation of the working class with its full strength, autonomous organizations and demands, we have said, would both carry the revolt further by a great leap. Finally, we pointed to the International Longshore and Warehouse Union’s (ILWU) massive Juneteenth rally in Oakland, California as an important first step, but only a first step.

On July 20th, Monday, a second major step has occurred. Organized under the label “Strike for Black Lives”, various workers belonging to a number of labor unions took action in support of the popular revolt in some 200 cities across the country.

The sheer size of the actions and the diversity of the sectors of the proletariat they included are indeed startling. Tens of thousands of workers took it to the streets or organized actions in their workplaces. From the call center workers of Memphis organized in the Communications Workers of America (CWA) to the California nurses of UPTE and SEIU (Service Employees International Union) organized various actions in their workplaces and in the streets, including pickets, walkouts, and rallies. In San Francisco alone, some 1500 janitors walked out. Historically less organized sections of the working class were not excluded: in several big cities such as Chicago, fast-food chain workers walked out or rallied against their employers and in tandem with the Strike for Black Lives campaign. There were also a number of work stoppages in numerous workplaces for 8 minutes and 46 seconds, the duration of time the killer cop strangled George Floyd in Minneapolis.

It is heartening to see that the working class is making the issues the anti-racist revolt has raised their own. In most cases, the strikers and protesters pointed out how the capitalist greed of the bourgeoisie goes hand-in-hand with racist practices. In McDonald’s restaurants, for instance, where the majority of the workers are people of color, even the basic PPEs and masks are denied to the workers. This points out to the possibility of the unification of the anti-racist struggle and labor struggle in a single united front.

This massive wave of action has also forced some of the big companies and a few Democratic politicians (Sanders and Harris, primarily) to express their alleged support. Ironically, McDonald’s issued a statement, telling that the company is sensitive to the issue of racism, and that they have made improvements in a number of branches to accommodate to the pandemic conditions. This coincided with McDonald’s workers taking it to the streets, proving the hypocrisy of their employers. Actions such as this are a massive blow to the Democrats and the globalist wing of the bourgeoisie, who state their support for the anti-racist movement, but do everything in their power to suffocate it.

What happened on Monday the 20th is truly unprecedented in the last few decades of the US history. Tens of thousands of workers striking or protesting in tandem with an anti-racist popular revolt points out a new phase in both the development of the revolt and in the class struggle of the country.

However, the struggle is far from being over. Some of the largest – and, alas, most bureaucratized – unions of the country, such as the United Auto Workers (UAW), are still absent from the scene, despite their large African-American membership base. It is necessary for these organizations to lend their support to the movement for the tables to be turned. Moreover, the strong unions which did participate in the actions, such as SEIU or Teamsters, are not free from bureaucratization themselves – quite the opposite. Teamsters, for instance, has witnessed numerous unsuccessful or semi-successful clashes between the rank-and-file and the leadership to put a more democratic structure in place in the last four years. Given this fact, the actions of Monday, July 20th appear as a giant and important concession the bureaucracy gave to the rank and file under the latter’s pressure. This is, of course, not to undermine their importance – far from it. Rather, we are calling attention to this point to see more clearly what lies ahead.

That the union bureaucracy is still very much in the driving seat of organized labor, albeit much more uncomfortably than before, is reflected in two other peculiarities of the actions of Monday, July 20th.

Firstly, the shape of the events was far from representing a unified struggle. While some workplaces got shut down entirely for the full day, others remained closed for only about 9 minutes, and some didn’t close down at all. While this reflects the unevenness of the organizational level of the workers involved in the movement, it also indicates the lack of efforts on the part of the leadership to eliminate this unevenness. It is also quite telling that the two legal barriers preventing this movement to develop into a general strike, the Taft-Hartley Act of 1947 (which prevents a union on strike from calling other unions to its help) and the no-strike clauses of numerous union contracts (including some of Teamsters’) were not addressed anywhere.

Secondly, the political messages of the actions were often formulated as appeals to the bosses’ and bourgeois politicians’ conscience, rather than workers’ own concrete demands. Organizers of the event announced in their own website that they want to see “elected officials us[ing] their authority to rewrite the rules so that Black people can thrive”. In Los Angeles, the main site of protests was none other than a boulevard named after the former Democratic president Barack Obama! All these factors indicate that the union bureaucracy is still trying to pull the movement to the straightjacket of Democratic politics.

Nonetheless, the sheer fact of the massive action marks a possible turning point in the unfolding of the class struggle in the USA. The union bureaucracy, the buffer between the Democrats and the workers, is still to be taken down within the unions; but it is retreating. The working (and unemployed) masses still need to organize themselves and join the anti-racist struggle en masse, but they are taking the steps in that direction. It is our hope and quest that these steps will culminate in a general strike that would target the racist, capitalist system as a whole!