Hands off our brother Şiar Rişvanoğlu, courageous defender of civil rights and social justice in Turkey! 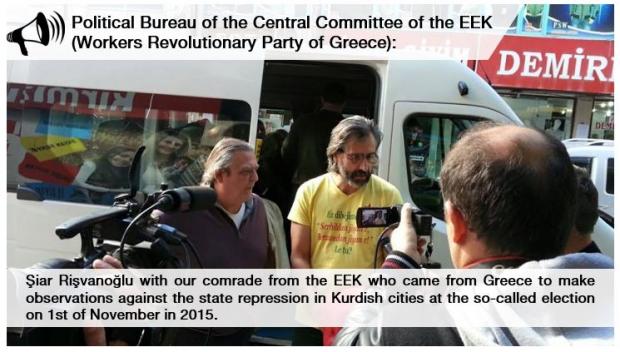 Şiar Rişvanoğlu is a well-known civil rights lawyer in Turkey,  courageously defending , for years now, against oppression and  discrimination, many persecuted and victimized members of  the Kurdish people, as well as Turkish and other victims of repression.

Comrade Şiar Rişvanoğlu is also a well-known cadre of the DIP, our fraternal party in Turkey, highly respected in Greece and internationally for his humanism, socialist convictions and dedication to the cause of social justice and emancipation.

Last Sunday when there was no one in the building, his office in Adana was attacked and the glass on the outer door was shattered using bricks. A note attached to the debris read:  “If you continue to pester the security forces of our glorious state, many other things will be shattered and scattered. Watch your step, you odious traitor!!!!!"

This odious and cowardly act by fascist and para-military State forcesis clearly a death threat. Şiar has been fighting all throughout his professional life against torturers and perpetrators of other violations in the courtroom. There was very recently an incident of this type. This is his award for that.

Solidarity for Şiar Rişvanoğlu and all victims of chauvinism, fascism and State terrorism!

Our solidarity now is more vital than ever as the chauvinist fevers and reactionary war dangers spread by imperialism, the ruling classes and their State apparatuses are hovering over the peoples on both sides of the Aegean Sea, in Cyprus, the Eastern Mediterranean, the Middle East and internationally.

Without internationalism we cannot breathe anymore!

The Political Bureau of the CC of the EEK