Greece and Europe: the viewpoint of the EEK (Workers Revolutionary Party) 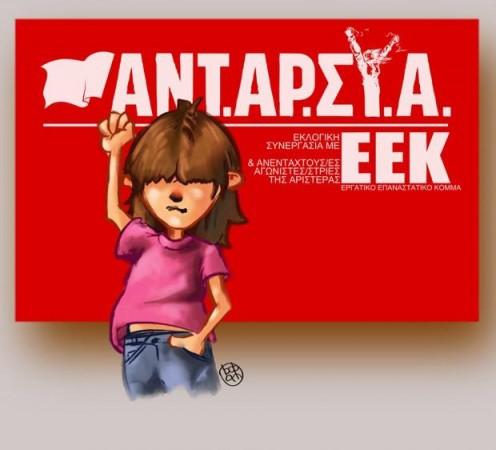 The following interview was published on the left-wing Italian web-site Il pane e le rose (Bread and Roses) on 13 September 2015, on the eve of the elections of 20 September. The interview with Savas Michael-Matsas, Secretary General of the EEK, was held by Stefano Macera.

The EEK( Workers Revolutionary Party) of Greece is a revolutionary Trotskyist  organization, the Greek Section of the Coordination Committee  for the Refoundation of the Fourth International( CRFI). It is founded in 1963 under the name of its predecessor  EDE( Workers Internationalist League), which was transformed into the Party, EEK-Trotksyists , in 1985.

For more than five deacades, the EEK was and is active in the workers, popular, youth, and social movements, nationally and internationally  continuously, before , during, and after the military dictatorship( 1967-74) until now. It intervened with its own candidates  in most elections for the national Parliament, local governmet and the European Parliament. from 1977 onwards  until now, in 2015.

As the  world capitalist crisis that erupted in 2007/08 has  a devasting social impact in Greece, in Europe and the Middle East-North Africa(MENA) regions, the EEK  was the host of the  three interntional Euro-Mediterranean Conferences, in Athens Greece, called by the Balkan Socialist Center 'Christian Rakovsky”, the Red Med web network, and the CRFI sections in the region, and  attended  by dozens of  workers organizations  coming from many countries and all Continents and from different political traditions of the revolutionary workers movement to discuss the situation and explore possiblities for  common international actions.

The 1st Euro-Mediterranean Conference in June 2013 took place in the aftermath of the Gezi Park rebellion in Istanbul, Turkey, the 2nd  Conference in March  2014, in the middle of the upheaval in Ukraine , and the 3rd in July 2015 at the peak of the Eurozone crisis and the capitulation of Tsipras and  the  Syriza led government to  a new, third program of savage austerity measures imposed by the EU, the ECB, and the IMF to  an already pauperized Greek people.

On 18-20 July, in Athens, took place the Third Euro-mediterranean Conference. Can you explain, first of all, its purposes and aims?

The central question, as it was stressed  in the title of the Call for the 3rd Euro-Mediterranean Conference , was Wither Europe ? The dramatic sharppening of the crisis between the EU/ECB/IMF and Greece in June-July 2015 and the final capitulation of the Tsipras “Left” government was  thorougly discussed in the Conference and there was a unanimous agreement in the Final Resolution  that it is not solely a  Greek national development but a turning point in the post 2008 global capitalist crisis, particulalry in relation to the failure of the entire  EU integration project. Thus, the purpose and aims of the  Third Euro-Mediterranean Conference were: a. to discuss how this turn affects, in different ways, forms, and degree, the life conditions  and struggles of  the working class and of all the impoverished populations in Europe, in MENA, and internationally; b. to develop further the international network of the workers and popular organizations participating to  these Conferences; c. to elaborate a common program of transitional demands; d. to explore  possibilites for plans of common international actions.e. To debate the question of the kind of revolutionary organization needed today

How were the Conference works structured?

There were plenary sessions with reports and debates, and  work in special commissions for resolutions  presented the last day of the Conference for discussion, ammendments and  a vote.

Why did you choose to hold the Conference once again in Athens?

Apart from organizational and techincal reasons, it is obvious that Athens should be an ideal place for such a Conference taking place at the time when Greece  had became the focus of the global crisis and of political attention  world -wide.

The initial statement (the Conference call) contains some watchwords shared by many left-wing and class organizations: debt cancellation, reject of Troika's austerity plans, put an end to NATO etc. Which political project these claims are part of? And which are the political and social players that have to pursue this project?

Precisely because the programmatic points raised both in the initial Call and  voted  unanimously in the Final Resolution are shared  by many left-wing and class organizations internationally, an international United Front of struggle and solidarity of these collectivities is more than necessary and urgent today. It could and should involve left wing and class organizations, social movements fighting against all forms of oppression and discrimination, workers' collectivities in occupied factires and workplaces experimenting  forms of workers management  etc.

In the Greek left, as well as in the international left, there is an intense debate about Tsipras' choises and his capitulation to the Troika. How did the Conference deal with this debate? What message did you send to those activists, many of them linked to Syriza, who have felt betrayed?

There was an extensive and rich discussion on the Syriza contradictory experience as a whole , from  a political force sustained and brought to power by the popular expectations to put an end to austerity to  the capitulation of the Tsipras leading group to the troika,  against the popular will most powerfully expressed in the magnificent victory of the NO in the Referendum of July 5. We do not ignore at all the fighters likmed to Syriza  who have felt betrayed, and we call them, not only to break from the capitulators but also to draw together with  all  those  fighting in the workers movement, the revolutionary Left , including the EEK, the necessary lessons  from this experience to move forward  to an independemt revolutionary internationalist direction.

The   “ Declaration in solidarity to the Greek people  against the  new 3rd package of “austerity” imposed by the troika” issued and  circulated in the aftermath of the Conference, signed by   a hundred of   intellectuals and political activists of the Left and of  emancipatory movements from all over the world was  a powerful political blow to the capitulation  of the Tsipras  leadership and co-thinkers internationally, as well as  against the  3rd Memorandum itself.

Greek case is often read as a clash between rich nations and poor nations, thus excluding any reference to the greek and international class struggle. On this bases, someone talks of alliance between mediterranean (southern) states in order to counterweight Germany and his hegemony power within the EU. What do you think about such proposals?

The EEK as well as all participants in the  3rd Workers Euro-Mediterranean Conference oppose  a nationalistic  reactionary line opposing   nations of the Southern  European countries to those in Germany and Northern Europe.  There are two Germanies and two Greeces, and two Europes: a Germany and a Greece of the capitalists, and a Germany and a Greece of the working and subaltern classes as well as an imperialist -capitalist Europe  and a Europe of the  exploited and oppressed . Our strategic goal is the  break up of the imperialist EU by the mass mobilizations of its victms,  and the socialist unification of Europe from Lisbon to Vladivostik.

Apart from the final statement, has the Conference proposed political campaign to to be pursued at a continental level?

Decisions and  inital steps are taken  for an  international campaign against unemployment and austerity in the EU, for solidarity to the migrants against the Fortress-Europe,as well as for an international Anti-War Conference in 2016.

Weeks ago we learnt about a call for the constitution of a political front of "No" (to the memorandum), signed by leaders of 13 left-wing greek organizations. What is/was your opinion about this? And what kind of approach will you have to this and similar initiatives?

There are many intiatives taken  for a “front of the NO” taken by the above mentionned organizations, by the Antarsya co-alition of far left organizations as well by forces spliting from Syriza. The EEK is in full support for this kind of initiatives fighting to unify them.

Tsipras has resigned, and next 20 September elections will be held. In your opinion, what is the meaning of this Tsipras's move? And what EEK is going to do for the forthcoming elections?

The Tsipras government has collapsed because of the popular indignatiuon and anger produced by its capitulation to the troika. The leading group around  Tsipras ignored  even its own Party, its elected  bodies, the decisoin to hold a Special Congress  to discuss  the signing of the 3rd memorandum etc.  and Syriza  imploded. A series of  left splits followed and still continue : the forrmer Left Plartform  founding  “Popular Unity”, the former Speaker of Parliament Zoe Konstantopoulou and her supporters joining now as independent candidates the “Popular Unity” lists in the coming elections,  the  Youth Organization of Syriza, which  supports in the elections “all radical anti-capitalist lists” leaving Syriza and developing  relations with the revolutionary left, et al.

There is a general re-alignement of forces involving those leaving Syriza , Antarsya , whcih has split as well with a  sizeable minority joining  the left national reformist  bloc of “Popular Unity” . The EEK has formed an electoral bloc with the majority of Antarsya and  other independent  fighters of the revolutionary Left for the  coming early eletcions on September 20, preparing for the  historic struggles that will follow the episode of the early elections against the preparations for a new pro-memorandum capitalist coalition government led either by Syriza or the Right.