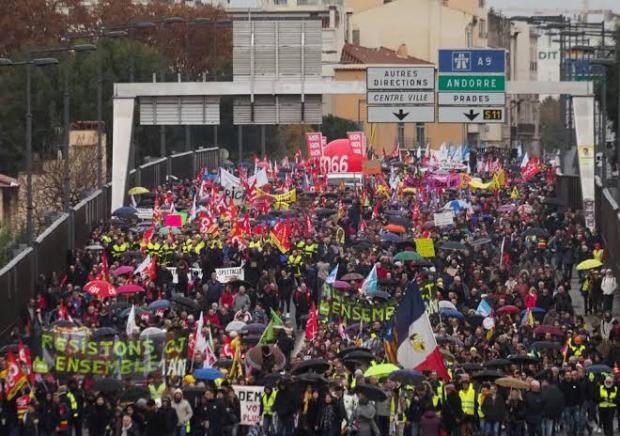 Renaissance Ouvrière Révolutionnaire, our sister organisation in France, was naturally present in the ranks of the French workers and people during the big general strike in that country. Here is a first report form our comrades.

The French working class has been preparing for this day for months. December 5 was chosen as the starting date of the general strike against the law that makes it possible for the ordinary French worker to get his or her pension only in the grave! The organization of the French bourgeoisie MEDEF had demanded this for years and President Emmanuel Macron who executes without any reserve when ordered by MEDEF rolled up his sleeves to pass this law. The answer was clear. Meetings were held at each station, leaflets were distributed in every corner, and almost every day another sector or layer of the working class declared their support for the strike. The D-day came and the switches started to turn off as from the evening of 4 December, and on 5 December in all the important cities of France, the streets were taken by the working class.

Certainly, the heart of the action was in the city of Paris. Even before the hour of the action had arrived, the decision to extend the strike after 5 December that came from various workplaces, especially from the 6 major inter-city rail stations in Paris, raised the morale. Even the numbers given by the spin-doctors had proved the success of the strike even the day before the masses took to the streets. On that day almost none of the trains connecting French cities and also France to neighboring countries worked, 97 percent of the so-called TGV trains did not function, while the French railways began to refund passengers for trains that would not serve, including four days after December 5. Moreover, the RER lines connecting the center of Paris to the surrounding settlements and suburbs ground to a halt and thanks to the extensive participation of teachers in the strike, only 3 schools were open all over Paris on 5 December.

Under these circumstances, from 1 pm onwards, the masses gathered in the cold of Paris, which saw a minus one during the day, and started to form their columns. The flood of people became such that those in the back of the mass had to wait for hours to begin the march. République Square, which is 2 kilometers away from the starting point of Gare du Nord, was full, whereas the column at the starting point had not yet moved an inch!

Especially in and around République Square, the police attack started in the first hours of the movement and continued for hours. The police were repelled each time, though they made various attempts to divide the mass into two parts and draw apart the mass in the Square from the rest. Various attempts by the police to detain protesters resulted, somewhat unfamiliar in France, in the recapture of the detained from the police. The Strike and Resistance Solidarity Committee, including our comrades, was also subjected to intense police attacks as the column tried to enter the Square. During the attacks, one Committee member was wounded in the hand and another comrade was injured in the shoulder because of the gas cartridges fired by the police.

Despite all the attacks by the police, hundreds of thousands of workers managed first to enter République Square along the route of movement and later in the evening to Nation Square, which was envisaged to be the endpoint of the action. Despite the cold and the attacks, the march which never lost its enthusiasm even for a moment, was the greatest mass movement that France has seen since the strikes of 1995. It is estimated that 250 thousand people were marching in Paris alone, whilst it is calculated that this number has reached one and a half million in all France. This great day of action and strike is the onset of a wave of struggle that is likely to go much further. With almost all critical sectors deciding to continue the strike after December 5 and the declaration of the second major movement on December 10, the arm wrestling has begun between the working class, on the one hand, the French bourgeoisie and the Macron government, on the other hand. A victory in this struggle could be the first domino to lead off the great working class struggles that will spread throughout Europe.