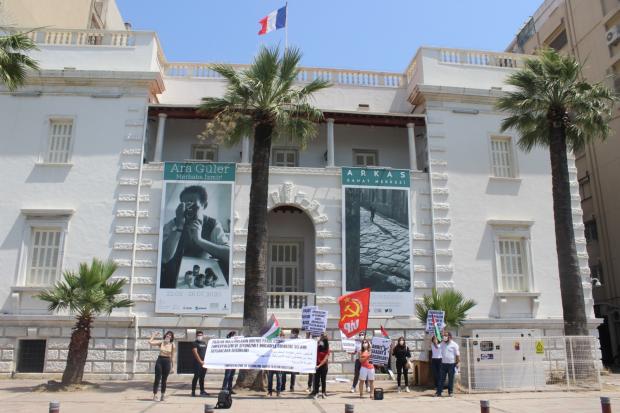 On Sunday 21st of June, Friends of Palestine Against Imperialism and Zionism organized a demonstration in front of the French honorary consulate in İzmir and protested the captivities of our two comrades, Georges Ibrahim Abdallah and Ahmad Saadat. Below, you may find the press announcement that FPAIZ read there:

Today we, Friends of Palestine against Imperialism and Zionism, are here to demand freedom, in the persons of our courageous comrades Georges Ibrahim Abdallah and Ahmad Sa’adat, for allmilitants who have been kept captive in the imperialist and Zionist prisons.

Ahmad Sa’adat and Georges Ibrahim Abdallah have been deprived, respectively, by Israel for 18 years and by French imperialism for 36 years, of their freedom.

However, what those two revolutionaries have done cannot be treated as crime!

Those two socialist militants fought against the French-backed Zionism invading Palestine and Lebanon,

as did the Kara Yılan (“Black Snake”, the assumed name of one of the heroes of the National Independence War who is immortalized in the Nazım Hikmet’s book “Kuvay-ı Milliye Destanı”)after French imperialism had occupied the province of Antep,

and as did Yörük Ali and Demirci Mehmet Efe after the English-backed Greek armed forces hadinvaded the province of Izmir!

Abdallah and Sa’adat incessantly struggled against the enemy and never sought reconciliation with imperialists. They refused to bow down to Zionism, which has expelled the Palestinian Arabs to establish a country that would serve as an imperial outpost in the Middle East. They fought to the end!

Georges Ibrahim Abdallah is a Lebanese communist revolutionary who has devoted his life to the fight against imperialism and Zionism. He has been kept captive since 1984 in France for allegedly being the founder of the organization called Lebanese Armed Revolutionary Factions (LARF). As the French- and US-backed Zionist Israel was occupying Lebanon, that organization both fought against the occupying forces, and expanded the war right into the heart of the imperialist countries by targeting those who have provided Zionists with military and monetary aid. Georges Abdallah is held culpable also for the killings of Charles R. Ray, the then U.S military attaché to France, and Yaakov Bar-Simantov, the then head of the French mission of the Israeli intelligence agency. He should have been released 22 years ago, however, France still keeps him captive.

Ahmad Sa’adat is the captive leader of the Popular Front for the Liberation of Palestine (PFLP).  He has devoted all his life to the struggle against Zionism after he had joined the Palestinian Student Union in 1967. From the early 1970s to 1994 when he was elected as the head of the West Bank branch of PFLP, he has been detained many times by the Zionists. He undertook the leadership of the organization after Abou Ali Moustapha was martyred by Israel in 2001. In 2006,the Zionist thugs raided the prison where he has since 2002 been kept jailed by the so-called“Palestinian Autonomous Authority”, and abducted him.

The struggle that has been carried out by Georges Abdallah and Ahmad Sa’adat bears tremendous importance for us in many respects.

Those two socialist militants and leaders have always been conscious of the fact that Zionists and their imperialist collaborators would never bring prosperity to the laboring classes of those countries. That is why Abdallah is still in prison in France whilst the collaborator “Palestinian Autonomous Authority” is favored by European imperialism.

Those two socialist militants and leaders have fought for a socialist, secular and democratic political program and against religious sectarianism. Their struggle shows that the Palestinian cause cannot be confined within the boundaries of political Islamism, and that the cause itself is a bannerof resistance under which the oppressed of all languages, countries and beliefs come together.

We, Friends of Palestine against Imperialism and Zionism, stand in solidarity with those two comrades and embrace their struggle. Israel, which has touted itself as the only democratic country in the Middle East, and France, which has pretended to champion human rights, should immediately release our comrades.

Down with French imperialism!

Down with American imperialism!

Down with the regimes in collaboration with imperialism and Zionism!

Down with Zionist Israeli State!

Friends of Palestine against Imperialism and Zionism