A first victory for the Sudanese revolution: will the people be able to override the “orderly transition”? 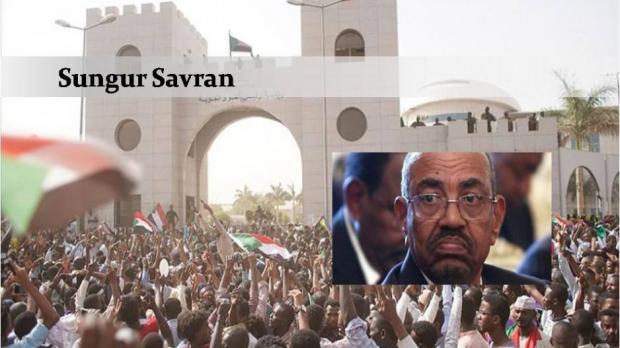 Omar al Bashir, the 30-year long dictator of Sudan, the perpetrator of the massacre of hundreds of thousands of civilians in the Darfour and South Sudan wars, the enemy of the working class and the poor of Sudan, the ally of the Muslim Brothers (the Ihwan), the collaborator of Recep Tayyip Erdoğan and the AKP of Turkey, has been ousted as a result of the power and resilience displayed by the popular movement, the revolutionary struggle that has lasted for four and a half months. Blessings to the peoples of the Middle East and Africa! We owe a debt of gratitude to the people of Sudan for having demonstrated once again that despots are not stronger than a people in action. Our hearts beat for the success of the Sudanese revolution.

This is the most important aspect of what occurred in Sudan on 11th April 2019. The revolutionary people of this Arab country bordering sub-Saharan Africa has been fighting for months to bring down Omar al Bashir, the National Congress Party, his instrument for power, and the whole governmental system that supported him with immense sacrifices, chanting “Taskut bas!” (“Just fall, that is all!”). Game over! Mission accomplished! Or nearly. Whatever complications are in store for the future, this is a victory for the revolution. Even the military coup has been successful thanks to the power of the people.

The people marched to the headquarters of the General Staff in Khartoum on Saturday, 6th April, a demonstration carefully planned for weeks. Since then, there has been a sit-in in front of the headquarters of the armed forces bringing together hundreds of thousands of people. There has also been supporting action in the other states of the country.

It is this impressive revolutionary resolution that has made it imperative for the ruling classes of Sudan and for imperialism to dispense with the dictator. This we must never forget.

AtRedMed we tried to follow the Sudanese revolution carefully from day one (See for instance http://redmed.org/article/2018-year-resurgence-third-wave-world-revolution).When Omar al Bashir declared a state of emergency at the end of February in order to stop the tide of the popular uprising that had already lasted two full months, we wrote that this was one of the final moves of the counter-revolution in the face of the transformation of the people’s rebellion into a revolution (http://redmed.org/article/sudan-revolution).  But we added that the counter-revolution had its spare instruments. We pointed out that the most probable scenario was recourse to an “orderly transition”, which was the most common instrument used in the Arab revolutions of 2011-2013 (most conspicuously in Egypt and Yemen) with the intervention of the United States. We stressed that there could be different scenarios in the case of an intervention by the armed forces, among which the most reactionary would be a coup d’Etat by Salah Abdallah Gosh, head of the powerful National Intelligence and Security Service (NISS for short) and a man of confidence for US imperialism as well as for Egypt and Saudi Arabia.

Now, Awad Mohamed Ahmed İbn Auf, First Vice-President and Defence Minister of al Bashir has declared that power has been taken over by a military council, that Omar al Bashir himself has been put under house arrest along with certain of his ministers, of high-level officials of the National Congress Party, and of certain high-ranking members of the Ihwan, that the constitution has been suspended and a state of emergency has been declared for three months, that the military council will govern the country for a period of two years. It is evident that these decisions have been made so as to implement the strategy of “orderly transition” through a “palace coup”. But no one knows what will happen next. No one should conclude, “a coup d’Etat has taken place in Sudan and there is nothing more to expect.”

It should not be forgotten that when Hosni Mobarak was brought down in Egypt on 11th February 2011, the administration of the country was taken over by a certain Supreme Military Council. For the next two years the Egyptian revolution stormed through the Middle East at the head of a number of revolutions in the Arab world!

Let us reiterate that no one may be certain where the present orderly transition will take Sudan. Let us rapidly go through some of the most probable scenarios:

The second spell of the Arab revolution of the 21st century has begun!

In 2011, the 23-year long dictator Ben Ali was ousted in Tunisia and the 30-year long dictator Hosni Mobarak in Egypt was brought down within the time span of only one month. This opened up a revolutionary hurricane all over the Arab world, one that lasted for two full years. Unfortunately, this first Arab revolution ended with the victory of the counter-revolution.

We wound up our article of 25th February on the Sudanese revolution (http://redmed.org/article/sudan-revolution) with the prediction that the Arab revolution was rising once again. Now, in the space of a mere fortnight, two strongmen, one Bouteflika, the 20-year long ruler of Algeria, and the other Omar al Bashir, the 30-year long ruthless dictator of Sudan, have been brought down. The second spell of the Arab revolution of the 21st century has begun!