Final Declaration of Social Forum in Wroclaw: Stop Militarisation! Dissolve NATO! Another World is Not Only Possible But Very Urgent!

by Organisers of the Social Forum Wroclaw
May 20, 2016 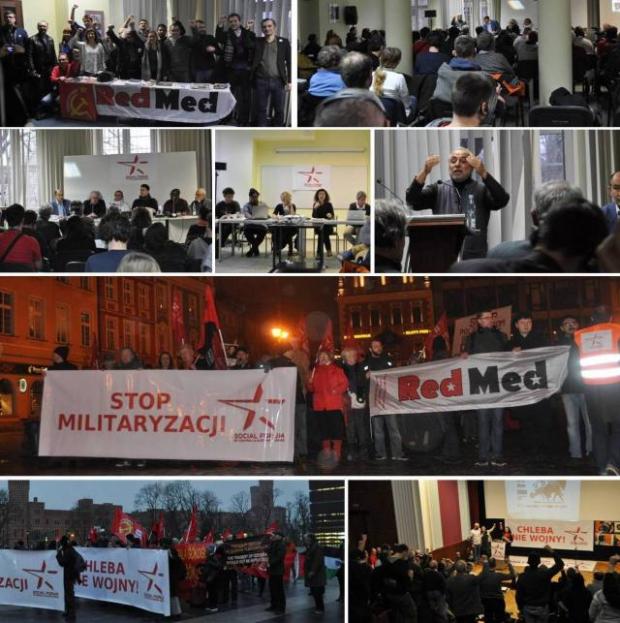 ANOTHER WORLD IS NOT ONLY POSSIBLE BUT VERY URGENT!

During 3 full days and evenings from March 11th to 13th 2016, about 300 participants from different civil society organisations and radical left forces gathered in Wroclaw (Poland) to exchange experiences on the peripheral situation of the countries of Central and Eastern Europe (CEEC) in cooperation with Southern European, North African and Latin American countries and with the participation by skype of Dr Samir Amin from Egypt and Dr Mazin Qumsyeh from Palestine, in order to outline common political goals for the future. As a result of the 13 sessions on wide ranging issues, like militarization, racism, antifascism, feminism, refugees, neo colonialism, environment, peripherization, workers rights and devastating consequences of the system change in CEEC and the current popular uprisings in Southern Countries, we reached the following conclusions:

1.) The participants of the Forum were united in declaring that this forum had a clear anti capitalist character and keep on cooperating in this direction in the future;

2.) The participants unanimously demanded the dissolution of NATO and to stop

3.) The participants declared that they committed themselves to build a strong cooperation among CEEC and the South;

4.) The participants expressed their special support for the people in Ukraine being now under the pressure of NATO as well as ensured full solidarity with the anti-austerity struggle in Greece. Participants firmly stood for the North Africans who are in danger of becoming the polygon for the USA`s plans to use the region in its strategy in Libya and further on in Algeria. They supported the struggles of anti-war militants from Turkey which is a tool in the hands of warmongers in the Middle East as Saudi Arabia, Qatar... who finance ISIS, AL Qaida

... with the complicity of the US and the Zionist entity which is the main cause of tension in the whole region especially against Palestinians, Lebanese, and Syrians!

5.) The system change in CEEC has taken place clearly with strong foreign - US and EU- intervention. The vast majority of the population wanted a reformed socialism, a more

democratic and more egalitarian one, but wanted by no means the restoration of capitalism, especially not in its colonialist form. The capitalist intervention was realised in a pre-planned way and affected all areas of the society, namely the productive capacities, the institutions, the

social organisations, the local authorities, etc. The brutal dismantling of the industrial and production capacities in general in the form of privatisation and factory closures, the foundations of CEEC's independence have ceased. Due to the defencelessness, the low wage as the only „competitive” factor, so the emigration and the productive assembly activity become dominant.

6.) Under the rule of neoliberal capitalism in crisis, the population of the peripheric countries both of the South and the CEEC region has been suffering heavy losses in their life conditions, economy, culture, society, and our environment has been seriously damaged.

Industry has been downsized; unemployment and poverty reached unbearable size, i.e. the CEEC - similarly to the South - have become the exploited periphery of the developed capitalist countries. During the transition years, even the up-to-date technical and economic co-operations of the CEEC were cut off. At the same time, participants are aware of the fact that the former socialist attempts have had several weaknesses and even mistakes – some of which originated in the historical situation of under-development and military conflicts.

7.) In the wake of the crisis, dangerous far right and fascist political forces have been reviving and strengthening in Europe. This is the result of the prevailing capitalist system and imperialism. In the so called Muslim countries the “takfiri” forces (Criminal gangs claiming Islam but created and funded by the imperialists and their puppets Gulf monarchies) and their influences are also on the rise. At the same time the resistance and the fight against this Janus faced (i. e. fascism and “takfirism”) phenomenon having the same source and strategy – namely hatred and racism - are also growing. Due to the successful Western ideological brain- washing in the CEEC many people in this region think mistakenly that the present war is

going on between civilisations or religions, since neoliberal economics are working together with neoconservative ideology at this stage of global structural crisis of capitalism, the logical path for the survival of the dominant system is a new form of fascism. But since old fascism has been delegitimized, the global powers created a new form of fascism under the concept of "clash of civilisations" which aim is to present victims as a threat and threats as "human rights policies" and "Right to protect policies”.

8.) Participants of the Forum made the following decisions:

a.) to organise a meeting on the refugee question in South Europe, either in Greece or in Italy

comrades’ suggestions will be taken into account and we’ll choose together the most convenient place to organise our gathering.

c.) To hold another forum in Tunisia, because the activists strongly involved in our struggle were unable to come to Wroclaw due to the EU visa policy towards Tunisian militants; (If they cannot come to us, we will go to them) ... we can think also, for schengen reasons, of

d.) To enlarge cooperation and build up a stronger movement of the CEEC and the countries

of South, including the Balkan, North Africa and Latin-America as well as with social movements of China and other countries.

e.) To create a unified Web site to write and translate all sorts of articles about the situation in our countries in order to exchange directly information and analysis.

The Wroclaw Social Forum put also the stress on the importance of the cultural participation with organizing an exhibition called “Struggling with Art” with the participation of two feminist Arab activists from Syria and Tunisia besides concerts and musicians from Bulgaria, Poland, and Russia... The mixture between all these cultures has created a warm atmosphere of solidarity

and esthetical exchange.... Art has a magic strength of communication.... To be continued!

Finally and in order to keep the main details in mind, a summary of each seminary is to be done by each moderator during the following next days.