The FBI votes against Bernie Sanders! 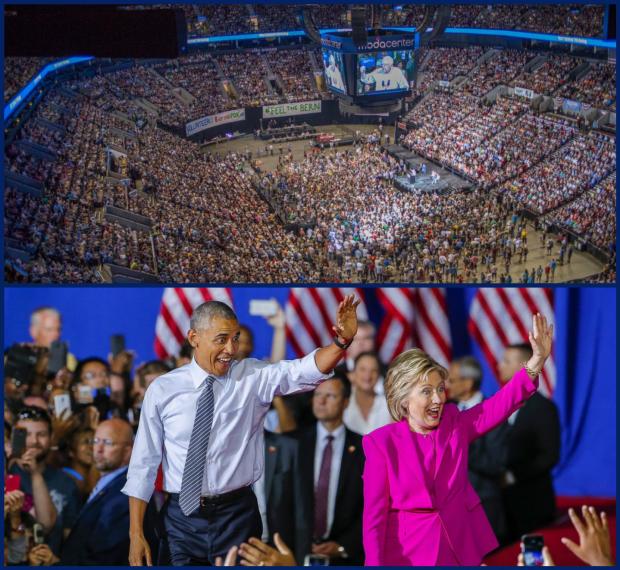 We should meet the workers and the youth, the Afro-American militants of Black Lives Matter and the defenders of the environment where they are in order to convince them that the only realistic solution is for a coalition formed around the core of the working class to take power, by any means necessary. If an independent Sanders candidacy materialises, the movement born thereof should be used to form the long-awaited working-class party that will work to that end. Let us not allow this promising social movement in the US to rot politically.

In a grotesque piece of theatrics, FBI Director James Comey tried to absolve Hillary Clinton of the charges against her regarding her use of private e-mail servers when sending classified information as Secretary of State during Barack Obama’s first term (2009-2013). At that press conference, the findings of the year-long investigation of the FBI were summed up in two different, and incontrovertibly contradictory, remarks. The first assessment is damning: Hillary Clinton and her aides were “extremely careless” in their use of private e-mail facilities in communicating information on highly sensitive security issues. Remembering that the whole investigation owes its origin to the assassination of the US Ambassador to Libya on 11-12 September 2012 (i.e. on the anniversary of 9/11!) at the US Consulate in Benghazi, this “extremely careless” behaviour may very well have directly made this assassination possible.

Having established this fact, the FBI Director then went on to say that on the question of “whether Clinton or her aides had mishandled classified information either intentionally or in a grossly negligent way”, the judgment of the FBI was that “no reasonable prosecutor would bring such a case.” Hence the recommendation of the FBI is to let the culprit go free! One need not be a highly learned US jurist to notice the crying logical contradiction between saying that someone is “extremely careless” and that did not commit “gross negligence”! What is even more striking is that the Director of the FBI should put himself in the shoes of a prosecutor and try to short-circuit the process by saying that “no reasonable prosecutor” (emphasis added) would bring such a case to court, thereby implying that any prosecutor who would dare this kind of lèse majesté would be considered “unreasonable” and hence suspect for being prejudiced against Hillary Clinton.

The truth is exactly the opposite. By the token of the very testimony given by the FBI Director, Hillary Clinton is very obviously guilty for “gross negligence”. But that is not all. Everyone knows that she has lied to the American public for sixteen months, denying she had used private servers for confidential e-mails, deleting mails some of which later had to be mined in other people’s servers, in short trying to the very end to hide from the public that she had engaged in “gross negligence”. Those familiar with the American political scene know that lying to the public is a very serious offence in US legal culture. In fact, Hillary Clinton’s spouse, former president Bill Clinton had got himself into trouble precisely for that reason in the Monica Lewinsky affair and the whole impeachment process, which in the end failed to remove him out of office, hinged on his hiding the truth. Now, whatever one may think of the relative importance of matters of sexual rectitude in public affairs, no one could deny that the charge against Hillary Clinton is much more relevant to the correct execution of the highest office in the country. But, barring a different decision from the Department of Justice, which has the final say on the question of whether there should be an indictment written, it seems that Hillary Clinton will be allowed to get away with her lies.

What made the situation even more grotesque is the fact that at the moment the FBI Director was talking at the press conference, Barack Obama was travelling together with Hillary Clinton to North Carolina to contribute to her presidential campaign for the first time. The situation was so awkward that White House spokesperson Josh Earnest felt compelled to say: “I am confident that the President and Secretary Clinton are not discussing the FBI investigation that is completed” on Air Force One! To top it all, this is what Obama had to say on Hillary Clinton as a presidential candidate: “There has never been any man or woman more qualified for this office than Hillary Clinton.” Again, one need not be a learned linguist to understand that this implies Clinton is more appropriate for the job than anyone who served as president of the US before, including figures such as George Washington and Franklin D. Roosevelt. When one is saying something so blatantly false, one tends to exaggerate so that the truth does not have any possibility to show its ugly face. This is what happened to Obama, generally credited with being a good orator. Someone who does not even show the elementary responsibilities tied to be in high office or the decency to admit her mistakes the most “qualified” for the most powerful political position in the world? So much for the left-wing fans of Barack Obama. “Yes, we can lie” would have been a better slogan for the “Obama legacy”!

The whole affair is so ludicrous that everything becomes transparent immediately. This is an operation to bar the way to Bernie Sanders’ candidacy for the Democratic Party. Bernie Sanders, with his rhetoric of socialism and his talk of a “political revolution”, is unacceptable to the party of Wall Street and of multinational corporations. Were Hillary Clinton to be indicted, it would have been folly for the Democrats to elect her as their candidate at the Democratic convention in July. (We will come back to the question of whether it is not folly even if she is not indicted in a moment.) This would leave them with Bernie Sanders. Technically speaking, a third nominee would of course have been possible. But that would have dealt the heaviest blow to the image, zealously propagated by the capitalist rulers of America, of a democratic electoral system and not only to the Democratic Party, but to the whole two-party system. So the absolution of Hillary Clinton is simply a manoeuvre to prevent Bernie Sanders from becoming the presidential nominee for the Democrats. It is not that a Sanders presidency, in case he should have won against Donald Trump, would have been a “political revolution” in any sense of the term.  No, any attempt to change America from within the two-party system is bound to fail miserably. Even the Labour Party in Britain, which, after all, is still a party at least partially rooted in the working class with organic ties to the trade union movement, as opposed to the Democratic Party of the US, a thoroughly bourgeois party in its origin as well as its current make-up, has not been able to stomach a left-leaning reformist leader of the type of Jeremy Corbyn. Sanders would either have been tamed or... possibly impeached for lying to the public, whatever the false excuses for that might have been!

Hence, it is not Bernie Sanders on his own that the US establishment is afraid of. What scares them is the millions and tens of millions of people who have voted for him and become galvanised in the process. And, despite the preponderance of the youth in the campaign, which is already a plus for the movement since no left-wing movement can hope to become a truly mass movement without the considerable support of the youth, what is most disturbing for the US capitalist class is that the working class, in particular its core strata of industrial workers, have shown great interest in Sanders’ politics. And to a lesser extent, the Afro-American minority, not so far the Southern communities but those who have been politicised lately through the “Black Lives Matter” campaign, have also been very receptive to Sanders. It is the combination of these and other constituencies, ecology, women in struggle etc. that scares the US capitalist class. It is this coalition of forces that they wish to bar the way to.

A perhaps unintended consequence of this move may turn out to offer Trump the presidency. Get ready to hear the epithet “crooked Hillary” until November! Those who reason in terms of the “softer” of the two Democratic candidates being in a better position to beat Trump reason in an eminently undialectical manner. The political spectrum does not always extend across a straight line. The large masses of the working class, feeling threatened by the seemingly unstoppable forward march of neoliberalism, is really hesitant between the poles of reactionary right-wing jingoism and the progressive working-class politics allied to other oppressed sections of society. Sanders may in fact be in an even stronger position to beat Trump precisely for this reason (and at least until recently that is what the polls said as well). So anointing Clinton for presidency, the Democratic establishment may very well find itself ruled by an enormity called Donald Trump.

All the better for us! All who have made the interests of the working-class and of the oppressed objectively promising to be its allies should work to convince the Bernie Sanders camp to abandon the unfertile ground of the through and through bourgeois Democratic Party and run independently as a third candidate. Sanders himself has seemed to prevaricate recently, even implying he may work together with Hillary Clinton. Work together with Hillary Clinton for what purpose? Has not Sanders himself made abundantly clear that she is the candidate of Wall Street banks and of multinationals, of US imperialism in one word? Is he himself ready to serve those interests now as well? Sanders may of course be playing at tactical finesse, hoping to push the bigwigs of the Democratic Party against the wall before he makes a move. If he had any dreams that Clinton would get herself into a legal mess, thereby giving him an easy victory, those should now have been dispersed.

Let no one say that a third candidate would open the way to a victory of Donald Trump. Unity with the capitalist rulers committed to neoliberalism has produced everywhere, first and foremost in Europe, a growing shift of the confused masses towards fascism and racism. Trump is just a special case of this tendency, a maverick, to be sure, but feeling very much at home with the like of UKIP in Britain of the Front National in France. It is only by forming a movement around the working class that one can fight fascism, not by disarming it in the name of a hollow “unity” with supposedly progressive capitalists, who will possibly throw in their lot with the fascists when the crucial moment comes. So election or no election, the movement is the key.

For us revolutionary Marxists, the movement may not yet be radical enough. The softer elements may very well dominate the scene for some time to come. But the fact that we cannot ignore is that there is a recrudescence of social consciousness and protest in America that has, momentarily, been channelled into the Sanders campaign. We should meet the workers and the youth, the Afro-American militants of Black Lives Matter and the defenders of the environment where they are in order to convince them that the only realistic solution is for a coalition formed around the core of the working class to take power, by any means necessary. If an independent Sanders candidacy materialises, the movement born thereof should be used to form the long-awaited working-class party that will work to that end.

Let us not allow this promising social movement in the US to rot politically.