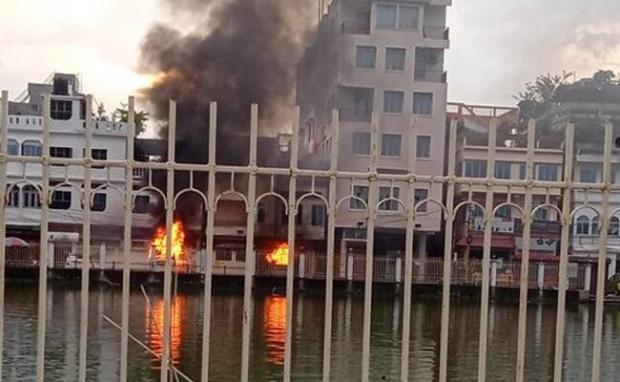 The Wednesday of September 8 witnessed the fascist arson of the Communist Party of India-Marxist (CPI-M) offices and various opposition media institutions by the Bharatiya Janata Party (BJP) goons in the Indian state of Tripura. An attack like this, which resulted in massive material damage and injured tens of people including party members and journalists, is not the first of its kind in recent history. Fascist paramilitary group National Volunteer Organization (RSS), and its numerous legal fronts over time, the last of which is the BJP, has long been employing terror tactics against minorities and working-class organizations. The leader of the BJP and one of the leading suspects for the organization of the Gujarat riots of 2002 which killed thousands of Muslims, Modi presented himself as a moderate for a short while after his first major election victory in 2014, but as the tide rose all over the world for fascism he gave up on the facade and has since followed the road paved by the open admirer and imitator of Italian and German fascism, RSS.

The sequence of events leading to this latest attack started with the announcement of a month-long campaign by CPI-M in September, demanding improved vaccination efforts, financial support to workers and peasants whose livelihood has been adversely affected by the pandemic, implementation of the rural job guarantee programs and the annulment of three farm acts that have long been fiercely protested by the peasantry. As before, the BJP responded with threats. On the eve of the arsons, BJP supporters tried to prevent the regional opposition leader Manik Sarkar from entering a public demonstration to address the crowd, leading to a brawl with CPI-M members. The police have been completely passive during the provocations and even suggested Sarkar to leave “to prevent further escalation”.

BJP media painted the events as communist provocations and announced a “massive demonstration” on the following day. This is when the attacks and arson took place. CPI-M speakers claim that these provocations are a result of the razor-thin margin by which the BJP won the last election (%43.5 to %42.2 for the CPI-M) melting away, as well as the fear induced by the protests.

Such attacks against working-class and opposition political organizations have been commonplace since BJP took power in the state in 2018. Claims by CPI-M sources indicate hundreds of oppositional party and mass organization offices were vandalized, more than a hundred CPI-M offices burned down, and 18 CPI-M members killed by fascists between 2018 and 2020. Neither Tripura is an arbitrary state, nor CPI-M an ordinary opposing party. Tripura has long been named a bastion of reds, stemming from a coalition of the minority tribal people and a well-organized working class. The left front led by CPI-M ruled this state during 1978-1988 and 1993-2018. As the foremost member of the leading coalition, the Communist Party rightfully boasts about the high literacy in the state and the diminishing inequality between the minority native tribes and the majority population, yet one must also ask how the Communist Party lost so much ground, especially among the youth, to the fascist BJP.

CPI-M speakers might very well be correct in their evaluation of the local conditions of these attacks, but conflating the Modi government with an ordinary repressive bourgeois one is a big mistake. The BJP has a strong mass base, and an experienced and long-lasting paramilitary organization at its side. In the process of fascism taking over India as a system, it is mistaken to think one can resist merely via fractured establishment institutions. It is also important to keep in mind the global rise of fascism as a result of the ongoing economic and political crisis. It is no coincidence that the very same party that is repressing the working-class institutions internally is also among the most vocal and passionate warmongers against China. Just like the attack of Trump goons on Capitol Hill, fascist organizations everywhere are getting bolder and testing their power. It is likely that the ongoing repression and attacks in Tripura state are such a test and a preparation for larger operations in the future. Hence, the notion that BJP fascism can be stopped “democratically” through “an alliance of all secular forces”, as declared by the 21st Congress report of CPI-M, should be fiercely rejected together with the absurd notion of the conflict of fundamentalism vs secularism being a central contradiction, and instead, it must be recognized how easily the “secular bourgeoisie” can back fascists in a slightly altered correlation of forces, and therefore immediate work should go towards organizing self-defense that does not limit itself to the constraints of parliamentary politics and strengthening the ties with the toiling masses.