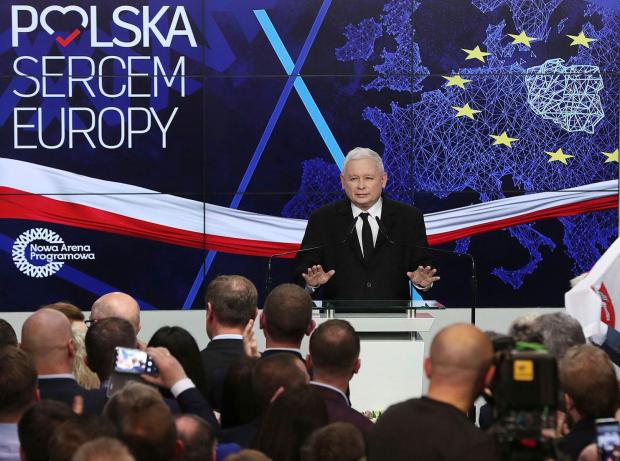 After six articles on the results of the European elections in Hungary, Romania, Greece, Italy, and France and the Nordic countries (Sweden, Denmark, and Finland) we continue our series with an article on Poland by our friend Ewa Grosewska.

The European elections in Poland were running in the context of not much substantive fight between the ruling party Law and Justice ( Prawo i Sprawiedliwość (PiS)) and the opposition – Citizens’ Platform ( Platforma Obywatelska (PO)).

The third place was taken by the new party called Spring (Wiosna) led by an openly gay person, mayor of the city called Slupsk. The main line of this party is related with anti -clericalism, secularism and the demand to close all mines in Poland for the sake of the climate. This party likes to be compared to Macron’s activity, but since there has been created the movement of yellow vests in France the members of this party do not talk about this convergence very often. The next places without election mandates were taken by the Confederation (Konfederacja) - a party made up of chauvinist nationalists and chauvinist neoliberals ( one of the leaders, Korwin Mikke, is known for his misogynist statements in the European Parliament), Kukiz 15 party ( Kukiz is the sure name of leader, ex rock star Paweł Kukiz), which is an annex to the ruling party. In the last place was a young Left party called Together (Razem), which cuts off from the main political scene but also criticizes the Polish socialist state which existed  from 1945 till 1989, communist ideas, Russia. All leftist character of this party ends where the West, NATO, and the EU should be criticized.

It must be emphasized that the result of the voting is related with some factors that construct  class structure. First, the main division between ruling party voters and officially main oppositionaly formation European Coalition is related with division between Eastern and Western Poland. Historically the Western part is better develop and after the system transformation in Poland the regions of Eastern part suffered more. Moreover the voters of Law and Justice had more often basic or vocational education, while voters of the Coalition had higher education more often. The choice between these two players also depended on the age of voters. The older voters more often voted for Law and Justice, although in the age range 18-20 years, also with a slight advantage.  Voting by senior voters may be related to their religiosity, but also to the fact of remembering People's Poland during Soviet Union era. Paradoxically, the anti-communist Law and Justice, which is tightening the law against "propagating communism," has voters who spent youth in real socialism and expect social protection. Generally, in addition to the ideologically national-Catholic electorate and those who like conspiracy theories, people vote for Law and Justice because it is the first government that offered social transfers. Its campaign to the European Parliament emphasized the need to protect "Polish interests" and contained light anti-immigration accents.

Oppositional European Coalition has campaigned for young people who want to travel, are open to other nations and believe in Western values. EC used an empty, stereotypical slogan about catching up with Western Europe and the need to defend Poles against Law and Justice together with the EU.

The new social-democratic party Together called for a social Europe, a minimum European salary, a European housing program and a European public pharmaceutical corporation. Such a program might have seemed adequate 15 years ago. But now, when Greece has been destroyed by the European Commission, when France is going to the level of Eastern Europe (and not conversely), such declarations are just not realistic and not fair. Together cannot reach an electorate deprived of dignity by capitalism, because its narrative is polite and politically correct probably because this party cooperates with European foundations supporting the EU. A critical narrative towards the EU appears only on the radical left. However, it is heard in the media  in the discourse  of Law and Justice or Confederation. This last chauvinist party, even if it criticizes German imperialism or Israel, dresses it in the context of absurd racism and Polish narcissism.
Generally, Polish society either ignores the European policy in particular and is busy with its own affairs or takes part in a plebiscite, feeling proud to be a citizen by voting. Knowledge about the lack of possibility of making decision by the European Parliament, knowledge about the anti-democratic and anti-social nature of the EU  is very low and it is used by parties in the theater called democracy.