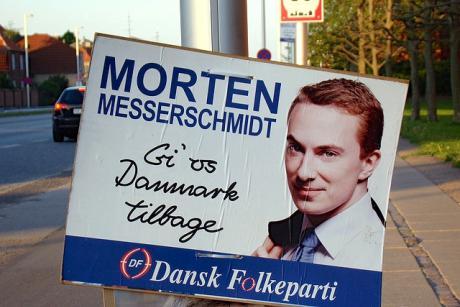 The winner of the EU election in DK is the rightwing, nationalist, racist, populist Danish Peoples Party (DPP). Out of a population of 5.6 million, they got 605.889 votes, i.e. 26.6% -out of the total seats of 13 they got 4 seats - only similar to the situation in France. Everybody else lost; the Social Democrats as head of the minority government for everybody to see has closed a historical chapter of being the dominant bourgeois workers party. Under the pressure of the capitalist crisis the party has turned neo-liberal including supporting every attack of the EU on the working class - losing the support of the workers majority.

The main party of the bourgeoisie is right now having its own little event of greed as their leader has dressed up big time in luxury closing - paid by the party members. As a consequence the voters fled.

The DPP has gained its huge support by its critical attitude towards the EU which is in accordance with a new tendency within the Danish population. The problem is that the root of DPP criticism is a reactionary one. Its base is racism and nationalism - the worst dirt of bourgeois politics. In its electoral campaign the DPP downplayed its racism some and opportunistically took on an image of "social responsibility" - protector of the "small man" and respectability trying to take the place of the old Social Democrats.

On the national level the consequences of the electoral success of the DPP is that the other bourgeois parties have already two days after the election begun singing a small "EU-critical" tune in order not also to lose nationally even more to the DPP, which is also the biggest party in Denmark by 23 % of the votes if there was an election for the Danish parliament right now.

The most bourgeois leftwing party of the Danish parliament - the neo-reformist Unity List/Red Green Alliance is not itself standing candidates for the EU election but support the Peoples Movement Against the EU which is politically a Popular Front type of organisation. It only got one member elected to the EU.

The situation in Denmark is first and foremost unstable signalling the fact that the working class has no organisation - parties or trade unions - who are providing any sort of defence of its interests and the bourgeoisie has no way out of the crisis, even if it declares that the crisis is over at the same time as unemployment is growing slightly.

The real problem expressed by the election result in Denmark is that as the rightward pressure is growing there is not also a growth at the opposite pole - a working class international revolutionary pole in Denmark and on a European level.

The need for a true alternative along a line of a united front of action on the European level to fight the bourgeoisie in each country and to smash the EU is urgently needed as the only progressive way out of the capitalist crisis. There is a deep connection between the possible success of such a task and the possible success of the process of building national sections in each country of a new revolutionary workers international party.