The Ethiopian uprising and the political crisis in Israel 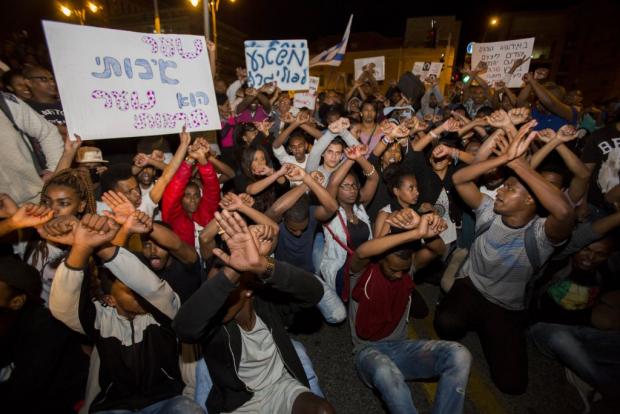 Two weeks ago the outbreak of youth of Ethiopian origin in Israel was felt in the streets of several cities, including Kirya Haim, the northern city where an Israeli policeman killed Salomon Teka, a young man of 18 years of Ethiopian origin, with a bullet in the back at the night of June 30th.
The demonstrations took place violently in several parts of Israel, but a week of demonstrations continued in 14 places, including Tel Aviv, Ashkelon, Beersheva and Jerusalem, where thousands of demonstrators of non-Ethiopian origin also expressed their solidarity with the members of the Jewish black community. As we wrote in Prensa Obrera (paper of the Partido Obrero of Argentina) in May 2015 on the occasion of a similar uprising because of the police beating of a young Ethiopian soldier at that time, the revolt shows the class character of the most exploited and segregated Jewish community within the Jewish state.

While the "easy trigger" policy against young people of Ethiopian origin has again been demonstrated and admitted by the former chief of police Roni Alsheikh by the mere fact of being black, many members of the community have glimpsed that only a mobilizing policy against the state, the real responsible for racist politics towards them, as towards the Palestinian population inside and outside the borders of 1967. Racism is an intrinsic form of the Zionist regime.

One of the young people of Ethiopian origins in Tel Aviv explained in front of the television cameras that only the unity with the Arabs victims also of the “easy trigger” can lead in a good direction to the fight against racism (2/7/19, Channel 12 News). And it was interesting that Jewish and Arab youth in periphery towns of non-Ashkenazi immigrants felt solidarity with the protesters, some of them also participated in the demonstrations.
Other members of the Ethiopian community indicated that "Our anger and frustration is real and justified, but ... We need to direct our anger at Caesarea, at Balfour [the location of the Prime Minister's Residence], at the government, [Public Security Minister] Gilad Erdan, at Benjamin Netanyahu They are responsible. They are to blame. "(Haaretz, 7/10/19).

But what is this situation demonstrating in a situation of supposed apathy of the Jewish and Arab masses in the face of the present electoral situation and the continuous attacks on the Palestinian population in Israel, Gaza and the West Bank when Israel has its most fervent ally, the government of Trump.

The crisis of a regime that apparently has the population "in the pocket" where Netanyahu's re-election has hitherto been taken for granted, exploded in the last elections when the prime minister failed to form a new ultra-right government which should include the fascist elements of the Kahanist party.

From that moment the Zionist parties of center and center-right, such as Blue and White and the new attempts of Ehud Barak (ex-Labor leader) to "save Israel" from the right-wing regime, but to continue with the policy of general apartheid: privileges of the Jewish population and especially of its bourgeoisie linked to the arms industry, cyber espionage, high-tech and monopolies of construction, infrastructure and tele-communications, and restrictions to the Palestinian population, elimination of the most elementary rights national and social rights in the West Bank and Gaza, but also within the State of Israel.

The only difference is that the center and center-right want an Arab population inside Israel, and of course the Jewish masses, while the extreme right of the Likud and its allies support a program of liquidation of all democratic rights within Israel, including the removal of the attributes of the Judiciary and the Supreme Court and the expulsion of the Palestinians from all of historical Palestine in a relatively long-term.

Those who think that the political situation in Israel is in the pocket of the right because of the colonial character of the Jewish population in Israel and the right wing of the last decades cannot explain this social explosion from within the Jewish state. Even a spontaneous manifestation of Jewish and Arab mothers for the abuse of children in kindergartens conducted the last week, also linked to the fact that the state does not subsidize these kindergartens, returned with the central slogan of the great demonstrations of 2011: "The people demand social justice". Apart from the fact that this slogan and the direction that led those demonstrations, could not lead to the understanding that this justice can only be achieved with a revolutionary change that replaces the current apartheid regime, this shows that there are conditions for a social change of this type, for this a Palestinian-Jewish political leadership is needed, fighting for a new social order in the Middle East, a Secular and Socialist Republic, under the leadership of the working masses.