Emergency statement by EEK - Trotskyists: NO to the contemptible capitulation! VOTE IT DOWN in the streets and in Parliament 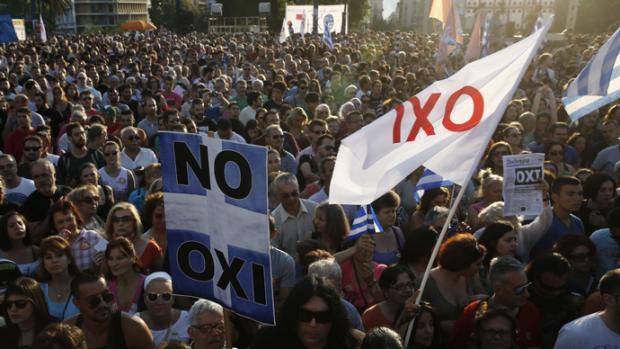 Tsipras and Tsakalotos, trampling the “NO” and the dignity of the people underfoot, submitted, disgraced themselves and signed the “list of horrors”, as the German Spiegel itself named the new ukase-memorandum.

The tyrants of the EU and the IMF, with the undivided support of the Black Front ND-Potami-PASOK-Mass Media, as well as of the “yes-men” in SYRIZA, move to the completion of their anti-popular coup on the basis of the votes in Parliament on Tuesday and Wednesday and essentially to the formal assignment of the rule of the country to a reshuffled, informal or even formal “national” subservient government, without irksome individuals – a cadre of willing serfs of Berlin, Brussels and Washington.

Together with the overwhelming majority of the indignant and betrayed people, EEK-Trotskyists calls to the MP's of SYRIZA who still respect the popular majority that voted for them to resolutely vote down the troika's list of horrors. What are they afraid of? That the government of the capitulators will fall, a government that is already in the hands of Merkel and her lackeys, ND, Potami, PASOK, the foreign and local capitalist thieves? In case of loss of the shameful parliamentary majority, even premature elections would give to the whole people a chance to express its own verdict, as it did on July 5th.

Most of all we call on the workers' and popular movement, who showed its strength to resist and its capacity for militancy on July 3rd and 5th, to act, to discuss collectively, to organise in order to tear the disgraceful capitulation and all the memoranda apart, preparing a GENERAL POLITICAL PERMANENT STRIKE.