by Balkan Socialist Centre “Christian Rakovsky” and RedMed
May 15, 2019 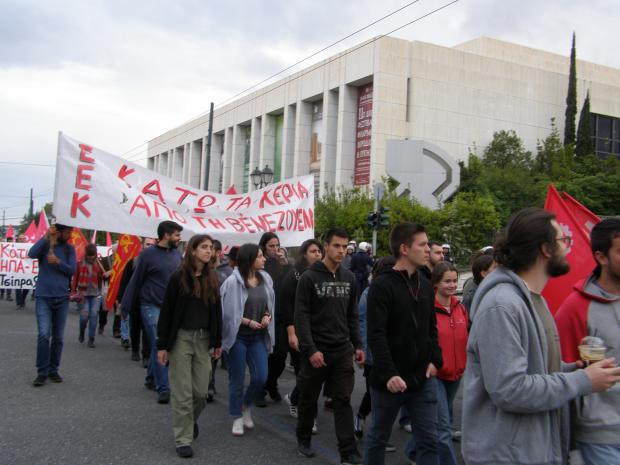 On Saturday May 4, 2019, in the Hall of the Union of Journalists (ESIEA) in Athens, Greece, the Balkan Socialist Center “Christian Rakovsky” and the RedMed web network organized a one day Emergency Encounter on Europe, on the eve of the crucial European Elections of May 23-26, 2019.
The Encounter was opened by the Introductory Remarks presented by Comrade Naz (DIP, Turkey) about the character and need of the Encounter. Comrade Naz also presented a Report on the situation in Turkey after the humiliating defeat of Erdogan in the local government elections of March 2019.
The main Report, on behalf of the Balkan Center “Christian Rakovsky” was presented by Comrade Savas Michael (EEK, Greece), focused on the impact of the global capitalist crisis on the political and economic situation in the countries- members of the EU as well in Europe as a whole. The Report emphasized the political tasks of the working class and of the revolutionary internationalist movement arising from this sharpening of the crisis, the rising of the Far Right, and the new wave of mass struggles such as the Yellow Vests movement in France, the workers’ rebellion against the slavery law of the Orban regime in Hungary, and the revolutionary upheavals in Algeria and Sudan.
The Report was followed by an important political intervention outlining a revolutionary internationalist perspective for revolutionaries in Greece and Europe by Comrade Kostas Skordoulis, on behalf of the OKDE/Spartakos, member of the Greek revolutionary left in the alliance of ANTARSYA.
A special intervention was made by Comrade Latief Parker (member of the Editorial Board of the journal Critique, Britain). Other interventions, written documents and messages were presented or sent to the Encounter by Tamas Krausz (from the Marxist journal Eszmélet – Hungary), the Renaissance Ouvrière Révolutionnaire (ROR-France), the Marxist Workers League (MTL- Finland), Prospettiva Operaia (Italy), Grupo de Independencia Obrera (GIO-Spain), and the movement Alternativyi (Russia).
An important Round Table of Russian Communists on “Russia and Europe” was organized and presented live by Skype by Comrade Alexander V. Buzgalin from the Alternativyi.
1
An important moment of the event was the talk by Comrade Stanislav Retinskiy, secretary of the Central Committee of the Communist Party of the Donetsk People’s Republic, in Donbass, who addressed the participants of the Encounter by Skype and answered the questions from the audience.
The initial Report and the Concluding Remarks by Comrade Savas were voted unanimously. It was decided that on this basis a Declaration of the Encounter will be published.
Also voted unanimously was an antifascist Statement proposed by the Communist Party of the Donetsk People’s Republic to be presented in the International Antifascist Forum in Crimea, on May 10, 2019, celebrating the anniversary of the defeat of fascism on May 9, 1945.

The Encounter adjourned by singing the International in multiple languages and the participants left to join the rally in front of the US Embassy in Athens, denouncing the imperialist coup in Venezuela and expressing solidarity to the Venezuelan and all Latin American peoples.