Elections in Post-Brexit Britain and in the French “5th Republic” 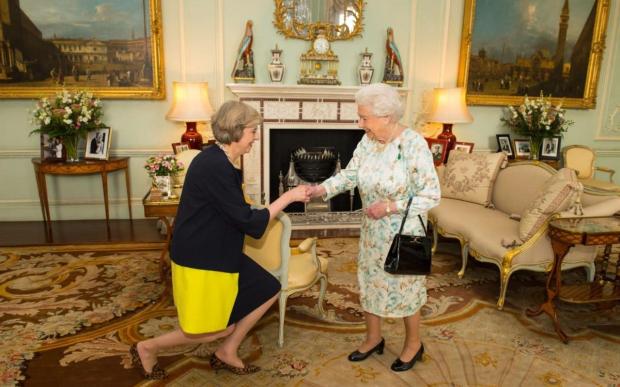 “ Dead woman walking”, was called the Tory leader Theresa May by the Tory former Chancellor George Osborne after her electoral fiasco on June 8. This vicious, vitriolic, unceremonious statement could be applied not only to the Conservative Prime Minister of post- Brexit Britain. It fits as well, but in a very different, contradictory way, to the 5th Republic established in 1958 by De Gaulle in France, after the apparently landslide electoral victory of Emmanuel Macron in the first round of the parliamentary elections on June 11. Furthermore, this statement accurately testifies about the dire situation in the European (dis)Union as a whole and beyond.

Anyway, Britain is already out from the EU, whatever is the outcome of the already complicated negotiations with Brussels. “ Brexit is Brexit”, as Theresa May said, when she miscalculated the general popular mood prevailing in the country after the 2016 Referendum and called for an early election to strengthen her power on the Tory Party and the country at large. Now, as the Tories lost their majority, in a “hung Parliament” where no party has a majority, May is desperately struggling for survival by negotiating for a minority government with the right wing Irish Protestants of the DUP. Even, worse, for her and for her Party: the leader of the Labour Party Jeremy Corbin, exorcized as a “ marginal radical socialist”, labelled as a “Trotskyist” by the bourgeois mass media, continuously under attack by his own Party's Blairite right wing, had an unexpected, meteoric rise in the elections, coming near the front door of Downing Street.

Following the surprise of the Referendum on Brexit , and the victory of a racist monster such as Trump in the White House, the unexpected has happened again- but, this time, on the left side of the political scene.

Why all went so wrong in the overall political calculations of Theresa May, of the Tories, of the British bourgeoisie itself?

Bourgeois methods of thought, particularly electoralism, either of the right or the “left” variety, remain blind in front of the enormous political destabilization producing now extreme political volatility, sharp turns and zigzags, huge regime crises all over the so called “advanced” capitalist countries, as a result of the global capitalist crisis that erupted in 2007.

In the last Euro-elections, in 2014, the far right UKIP of Farage was triumphant, and in the 2017 elections nearly annihilated. Cameron thought he had the opportunity to capitalize on the outburst of nationalism and tried to manoeuver with the EU and the Euro-skeptics of the Tory party by calling the Referendum, while supporting himself the Remain camp. The manoeuver backfired, Brexit won and Cameron was out from power. May thought that she had a solid basis ( “ Brexit is Brexit”) to establish her indisputed rule over the Tories and the country as a new Thatcher and the best negotiator of a “hard Brexit” . So she called an early election - and she lost the bet.

Theresa May, and the ruling class underestimated completely that behind the contradictory political behaviour of the masses, reflected in the distorting mirror of the elections, an explosive social anger, even despair, was building up among workers and pauperized people, after the devastation of a protracted, insoluble crisis of the capitalist system itself, not caused just by the EU, or by the eternal scapegoat of the far right, the immigrants.

The anti-working class arrogance of the Tory program, including the totally demential “dementia tax”, put fire on the accumulated dynamite. From the other side, the social democratic program of a Corbin hated and vilified by all forces of the capitalist order made him the pole of attraction of a critical mass of discontented workers, particularly the youth, the unemployed, and the urban poor. A sharp left turn has been produced in post-Brexit Britain plunging it in a dramatic regime crisis.

The source of this upheaval is the on-going, a decade- long, and insoluble so far world capitalist crisis, which cannot be solved by parliamentary means, by Tory austerity - or Corbynite neo-Keynesianism. All these capitalist economic strategies have already failed to overcome or “regulate” the contradictions of a decayed, globalized capitalism that imploded in 2007. We are still in the begining of the deepest crisis of bourgeois rule in the country and the “Old Continent” where capitalism was born.

A few days later, the crisis of bourgeois rule took another form in the elections for a new Parliamentary Assembly in France. After his victory in the Presidential Elections, Macron is hailed by the international mainstream media as the great victor and undisputed ruler of the country as all sizeable parliamentary opposition has nearly evaporated together with any dreams for a “cohabitation” with the new aspiring Bonaparte.

But the gigantic abstention of more than 51 per cent of the electoral body demonstrates that the majority of the population are hostile both to Macron and to all the existing corrupt bourgeois political system. Already in the Presidential Elections, it was clear, and we had emphasized it oursleves too, that the 5th Republic founded by De Gaule in a bonapartist coup in 1958 is in shambles. The traditional parties that ruled the country for decades, the Right and the social democratic Left, were repudiated massively by the voters.The results of the parliamentary elections confirmed this irrefutable fact. No coming back from the dead, not a miracle took place.

The far right Front National of Marine Le Pen had also a serious set back, failing obviously to become a pole of attraction of the popualr rejection of the traditional parties, and deepening its own internal divisions and crisis.

Macron with the full support of the strongest sectors of the ruling class in France, and in the EU, including Germany, was promoted as the “young” saviour of the senile social system basing his rise “beyond right or left” by building a “new” formation with the most rotten material, by cannibalizing the dead bodies of the traditional parties, the Right and the Socialist Party. The so-called “civil society “ candidates of La RépubliqueEn Marche, although many of them never had passed by an electoral test or spoke with the voting people, they are coming from positions very entrenched in the State apparatuses and/or business. This pseudo-party is composed and try to function as a capitalist enterprise- but in conditions of bankruptcy of the system itself. You cannot create a new living organism by assembling bits and pieces from dead bodies. Only a monster of Frankenstein can be the result.

As a matter of fact, this Presidential “Party” is the avatar of a 5th Republic already dead - LaRépubliqueZombie En Marche!

Under the existing electoral system, the Macronites with only about 16 per cent of those having the right to vote will have probably more than the 70 per cent of the seats in parliament. An old talking shop reduced to and recognized publicly as a rubber stamp of the presidential rule.

The defeated left, including most of the far left, cannot see the reasons for their defeat, the nature of the victory of Macron- and of its vulnerability.

The Socialist Party nearly disappeared paying the price of all its betrayals.

The Communist Party has shrunk and blames...only Mélenchon, not its own tail ending of him as before it did with the ruling social democracy.

Mélenchonblames everybody else and the media.

The so-called “progressive” media blame Mélenchon to be “too radical” and “too aggressive” after the Presidential Elections, loosing, in this way, the gains of France Insoumise in the first round of them. Actually this left reformist, nationalist demagogue, misleading a section of the population moving to the left, represented always the link between radicalized popular strata with a section of a “radical” bourgeoisie and petty bourgeoisie , a phenomenon quite traditional in France, from the February 1848 revolution to the Popular Front of 1936, with disastrous always results. The symbol of this link with “radical” but bourgeois France was and is Mélenchon's order to forbid red flags or the singing of the “International”, or even the PCF flags from his meetings.

The NPA was defeated and defeatist even before the first round of June11. It presentedits own independent candidates only in 28 from the 577 circonscriptions. The reasons were not solely financial costs, lack of organizational preparation or a preference for the extra-parliamentary struggle as it was said post festum.( At least Lutte Ouvrièresucceeded to present independent candidates in 553 circonscriptions winning a modest vote of 158,574 , a 0.72 per cent of those who voted) The defeatism – not just a pessimism- is rooted in its liberal leftist policies that refuse to see any revolutionary possibilities in the near future. In the Communiquéon June 11, 2017, the NPA leadership cannot see even the collapse of the 5th Republic. It speaks only for “ a sick Republic more and more undemocratic” - if the regime established from 1958 onwardswas not already Bonapartist. Blind to see anything going beyond a bourgeois republican regime, the NPAremains blind to thecrisis of the regime itself that some analysts in the mainsream press could see( for example, par Gael Brustier, “ Législatives: vers la poursuited' une crise de régime” June 12, 2017, www. Libération.fr/auteur/3188-gael-brustier” ), and, of course, the impact of the on-going world crisis on the vulnerable Macron Presidency.

So it has nothing to advance but to blame Mélenchononly for “division of the left”( whatleft?) and to propose an opposition more or less on a combative trade union basis against the anti-working class measures of Macron, immediately after the second round.

Macron indeed is prepared a real class war against the workers to destroy the Labor Code completely, far beyond the blows given already by the El Khomri Law, to fire 120 thousand from the public sector, to cut the pensions for the poor and free from taxes the rich. He starts from now the attack on the Labor Code to complete it by “ordonnances”, legalized by a fully controlled Assembly until September 20- just four days before the crucial German Elections.

These attacks are the demand not only of French capitalism but of the German ruling class and the EU to reforge the damaged German-French axis of the EU project, without which it cannot be neither the euro nor the EU itself.

The process of disintegrationof the post Brexit EU hasnot been stopped. And,we have to take notice, as the FinancialTimes on June 12 emphasized that the electoral upheavals in Britain and France coincide with the Eurogroup meeting of June 15 on the never ending saga of the Greek bankruptcy.

We are moving in France and in the EU as a whole in a period of great confrontations that the mobilization against the anti-Labor Law El Khomri in 2016 was only the prelude, a first battle in an escalating class war.

Regime crisis means crisis of political State power: which class will prevail to take the fate-or the misfortune- of society at its hands.

The biggest danger for the working class is the absence not of combativity- its fighting capacity is still unbroken, despite the setbacks- but of a revolutionary leadership , of an internationalist combat party based on the proletarian masses. We have to prepare urgently. The Emergency 4th Euro-Mediterranean Conference , which successfully took place in Athens on May 26-28, was a step towards that direction. We have to continue, to fight, to organize, to prepare the struggle for workers power and a socialist unification of Europe on the ruins of the imperialist EU.