EEK Statement: Balkans for its people! Not for capital, EU, NATO and fascists! 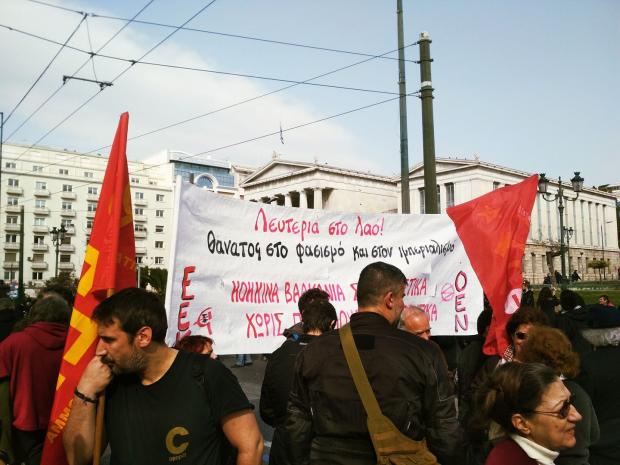 The events in Greece concerning the so-called “name dispute” with respect to Macedonia have caused an extremely nationalistic turn in the country, pitting a sizeable part of the Greek population against the neighboring people of Macedonia. Sections of the left have capitulated to the rising chauvinism. The Workers’ Revolutionary Party (EEK) of Greece has been a proud internationalist voice in this hysteric atmosphere. Below we are publishing an English translation of EEK’s statement with some delay due to translation and editing. The statement talks about the 4th February demonstration in Athens in the future tense because the text itself was issued on 30th January. This demonstration has now been held, gathering a crowd estimated to be close to 300 thousand.

After selling everything out with the memorandums, after selling out people’s blood to the EU (European Union) and the IMF (International Monetary Fund), all the servants of capital either sit in the government chairs now, or were sitting before or want to be rounded again, along with brocaded bishops, lunatic “Macedonian-fighter” masqueraders, and mostly paramilitary forces, Golden-Dawn Nazis and other fascists, who are now attempting to throw us into the fire of nationalistic cannibalism, under the guise of “an empty shirt”, [to use the words from George Seferis poem]-  the “name” of neighboring Macedonia.

The SYRIZA-ANEL's “left-right” wing government in Athens tells shameless lies when it claims that the talks with its’ Skopje counterparts in "finding a common solution to the name issue" are being done in the interest of the people of Greece. They are being mandated by imperialism, America's Trump, NATO, the EU, in the interest of their own but also of the local capitalism which dreams of “taking its part as the hegemonic role in the Balkans”, as Tsipras told on its behalf. The Greek ruling class reheats its old chimera, which has brought historical catastrophes, to become the gendarme of the imperialist West in the destabilized Balkans and the burning Middle East, completing the NATO’s encirclement of Russia. The unholy alliance of the Tsipras-Kotzias-Kammenos government with the far right Netanyahu and the Egyptian dictator al Sisi is part of this framework, in order for the ruling classes of the region to share a part of  the profits of multinationals of oil and gas..

On the other hand, the fragmented right wing of New Democracy under the leadership of Adonis [Georgiades] and "Koulis" [Kyriakos]  Mitsotakis thinks that by selling “patriotism” and by inflaming the existent nationalist anti-human tendencies, it will get more votes and government chairs. It wears a traditional "fustanella" [national peasant dress of the 19th century] and seizes the  sword of the nationalist savior, alongside the military General Fragoulis, while now and in the past the right wing was and is ready to sell everything out and itself together, to the imperialist bosses. The unambiguous proof is the pathetic leader of New Democracy who, while stating that he would never meet with Tsipras in any case to discuss the Macedonian issue, immediately, after the order given to him by the American ambassador in Athens, went to the Maximou Palace of the Prime Minister. So, the head of New Democracy demonstrated by his action whom he considers as his real boss..

It is a fact that after the reactionary nationwide gathering of the nationalist carnival in Thessaloniki on 21 January, followed by the burning down of the squat " Libertatia", the attack on the squat "School" and to the anti-chauvinist gathering in Kamara Sq  and the pogroms on the city streets by fascists under the full protection of the police, all the reactionary forces of right wing, the state and the para-State apparatuses, the Church and the ruling class itself, gained courage and announced a new rally in Athens on February 4th.

Some circles of the capitalist class are worrying because of the protracted State power crisis and the weakness of New Democracy to provide a convincing and stable alternative solution to a collapsing SYRIZA. They want to assemble together the most counter-revolutionary  far right and  fascist storm troopers as a united  political  force and possibly a  far right  partner in a right wing coalition government, like in Austria. They hope that in Greece, too, in conditions of social disintegration, despair and nightmarish rise of nationalism on a European and international scale, they will be able to play the nationalist card.

The danger is real and visible to anyone who does not want to close their eyes, staying in a convenient confusion. As the ruling class wants to poison with the nationalist poison a people reduced to a nation of the destitute, any concession to nationalism, including to present itself as “left patriotism”, is a crime. After Thessaloniki, some, such as the LAE [Popular Unity, split from Syriza in 2015] leadership, the  “Plefsi Eleftherias [Freedom Navigation]” around Zoe Konstantopoulou [former  Chairperson of Parliament  during the first Syriza government], and other luminaries, thought that they would pick up votes from the revived nationalism, giving to it “left”, “socially sensitive” or “genuine patriotic” credentials. We call every honest fighter in and around these movements to separate their position publicly and come into a break with those acting as a "left" chorus of friends of General Frangoulis'. We call on all left parties, organizations, workers' collectives, people’s and youth movement, to decisively oppose the Barbarians. No compromise, no vacillation, no surrender! The way out of the crisis will either be internationalist and revolutionary or there will not be an exit at all.

The question is a class question: either capital with nationalism will plunge the people today into a nationalist hate bile and tomorrow in the blood of a war, or the working class leading the poor popular masses will raise the flag of the brotherhood of the oppressed people and crush capital. No people can be free if it wants to enslave or “order the name” of another people, including the population of neighboring Macedonia.

We are fed up with all the disasters brought to our region by the imperialists and their local subordinates, the bourgeois politicians, their military, their storm troopers and their fascists. NATO and EU imperialists out of the Balkans! Let us follow Rigas’s path, for the Balkan Socialist Federation! Death to fascism, freedom to the people!

Let’s immediately take a small but courageous step forward, let the opposite voice of internationalism be heard strong this weekend. The EEK calls for participation in the anti-fascist rally on Saturday 3rd February at Rigilis at 6 pm and at Propylea in the anti-chauvinistic internationalist gathering on Sunday 4 February at 1pm.