EEK: Kick out from Greece the right-wing Zionist Netanyahu! 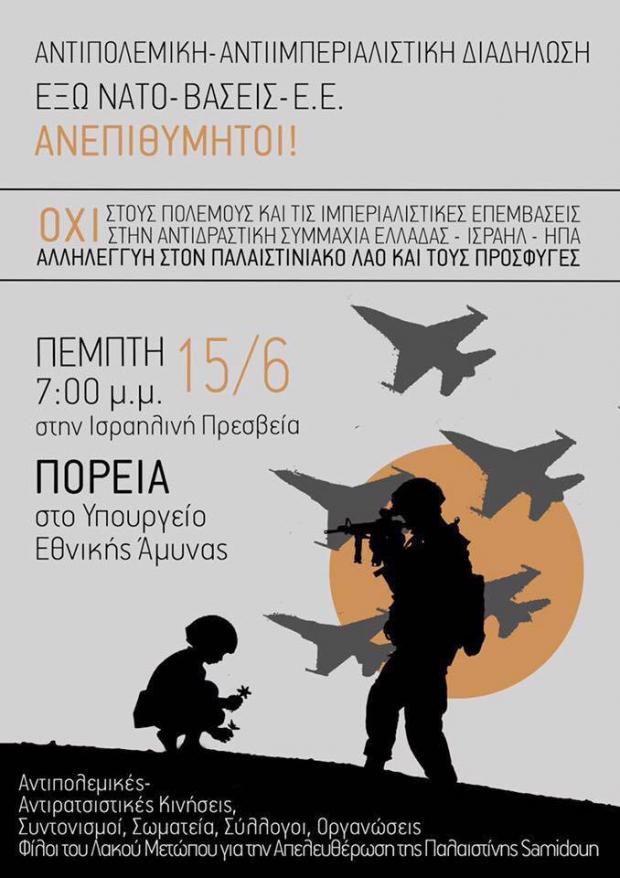 Kick out from Greece the right-wing Zionist Netanyahu!

WHICH THREATENS OUR PEOPLES!

On 15th June in Brussels, the  Eurogroup will be imposing new austerity laws for the 4th (complementary) memorandum against the Greek people. At the same time, in Salonika, a triple “alliance” of reactionary forces will be attempting to shape in the area of Eastern Mediterranean, the framework for the participation in the looting of natural resources, exacerbating an already dangerous situation and threatening to spread the fire of war, which is already destroying the Middle East.

The meeting in Salonika of the far right-wing Prime Minister Netaniahou, of the right wing president of the (semi-occupied) Cyprus, Anastasiadis, and the host, the Prime Minister of the "left"-right government of Greece, Tsipras, has nothing to offer  to the peoples in the area but disasters.

Plans of exploitation of natural resources in the area of Eastern Mediterranean, will not in the least improve the living standards of the people, especially the Greek People which is suffering  a social catastrophe imposed by the troika of thr EU/ECB/IMF and all Greek governments, right or "left"  Only oil companies such as Exxon Mobile of the US Secretary of Foreign Affairs, Tillerson or the French Total, or the Italian ENI  hope to see their profits skyrocketing. At the same time war tensions will exacerbate as well as an armaments race. The Greek people as well as the people of the area will be forced to pay for these deals, through the armaments race and perhaps their blood.

At the same time, this reactionary “triple alliance’ ignores and violates the fundamental rights of the Palestinian people, the people under Israeli occupation. This deal aims at the stealing of natural gas near the coasts of Palestine, a stealing of resources belonging to the Palestinian People. At the same time, the far right-wing leadership of Israel is encouraged to annex the whole Eastern Jerusalem and the whole West Bank to Israel. In reality, the “triple alliance” Israel-Greece-Cyprus is part of a wider imperialist strategy, involving Egypt of the dictator Al Sisi and the medieval regime of Saudi Arabia. After the assumption of the presidency of the USA by  the racist far right-wing Trump and his visit in Saudi Arabia and Israel, the imperialist aggression has increased threatening Iran and is regional allies or partners.. The break-up of relations with Qatar has nothing to do with "terrorism", nourished first of all by Saudi Arabia but with its refusal to participate wholeheartedly  in the anti-Iranian campaign. Trump aims to create an Arab Sunnite NATO in alliance with Netanyahu’s Israel.

But by puting oil to the fire, the flames of war may as well spread westwards, in the Mediterranean and the Aegean Sea, especially as the Erdogan regime seeks its place in the new configuration of regional forces.

The Tsipras-Kamenos government, more than any other capitalist government in the history of Greece, violates the rights of the Palestinian People for liberation, independence and supports the imperialist strategy in the area.

The SYRIZA-ANEL government, capitulating to the EU and the IMF by signing one package of  draconian  austerity measures after another, has declared war on the working class and the people while supporting imperialism in its wider war plans. It strengthens the NATO bases and the deportation mechanisms of refugees  sacrificing them on the altar of the Fortress-Europe by supporting the inhuman  anti-refugee deal of the EU with Turkey. Together with the Anastasiadis government in Cyprus and the UN, it promotes a reactionary plan against the Cypriot People and at the same time, with the pretense of the hegemonic pretensions of the Erdogan regime in Turkey, plays with the fire of nationalism and war.

The meeting of the “triple alliance” in Salonika comes only a few days after the heroic hunger strike for the Freedom and Dignity of 1600 Palestinian political prisoners in the prisons of Israel. It comes in the 50th anniversary of the Six Days War and the occupation oh the whole Palestinian territory.

No to the legalization of Zionist Occupation of Palestine and oppression of the Palestinian People! No people can be free as long there are people enslaved and oppressed.

On the 15th of June we are all of us  out, on the streets, marching against the presence of Tsipras-Netaniahu-Anastasiadis in Salonika.

No to the reactionary alliance promoted by Imperialism and its Zionist mad dog. Let’s create a front of revolutionary forces against the imperialist war and all the reactionary bourgeois regimes.

Let’s crush US imperialism and EU imperialism, topple the capitalist governments and fight for workers power and the socialist unification of Europe.

Support the rights and struggle  of the Palestinian people  for freedom and dignity, for the right of self-determination, including the return of return!

Freedom to the imprisoned fighters!

Down with Zionism,  for  a free, united secular, socialist Palestine· in all its historic territories, on the basis of co-existence of Jews and Arabs, within the framework of a Socialist Federation for the People of Middle East.