DIP: Yes to equality and freedom of the Kurdish people! No to the imperialist, Zionist, colonialist patronage and to Barzanistan! 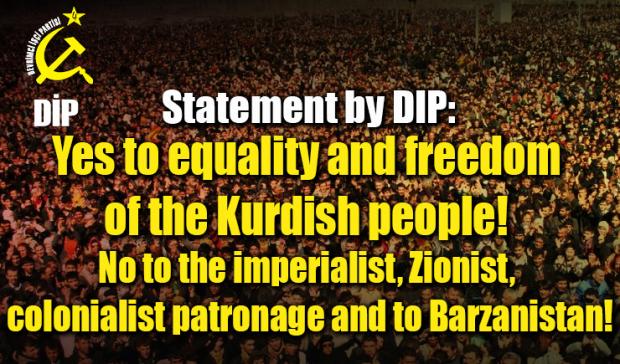 There have been various reactions to the referendum planned in Iraqi Kurdistan on 25 September, by actors ranging from the states of the region to the imperialist powers and the Zionist entity. The Revolutionary Workers’ Party (DIP), who grounds on proletarian internationalism, considers the self-determination right of nations as a principle and defends equality and fraternity of peoples,  approaches to this question from a point of view of the oppressed Kurdish people and the interests of the working class.

Whose fate will be determined by the referendum?

From this point of view, it is clear that the Kurdish people has the equal political, cultural and economic rights as the peoples with whom it lives together, including the right to form its own state. The question of timing, evoked by the imperialist and colonialist powers in order to defend their own interests, means nothing to us. A people’s demand for equality and freedom is not a matter of timing. It is a right!

However, in a contradictory manner, the September 25 referendum is based not on the will of the Kurdish people, but on the usurpation of it.  Barzani, who decided and introduced the referendum,  exceeded his period in office as the leader of the Kurdish Regional Government, on August 25, 2015, and extended it until 2017 by a “de facto” decision of the Ministry of Justice. In addition, he expelled the ministers of Goran movement which is a part of the government coalition. Therefore, Barzani has usurped the power, ignoring the will of the people by keeping elections from taking place in Iraqi Kurdistan. If the elections took place, it would be rather difficult for Barzani, whose popular support waned due to the fact that his power is soaked in corruption and his collaboration with the imperialist and colonialist powers, to win against other Kurdish parties. Thus, by putting the referendum in the order today, Barzani seeks to maintain his own power, by misusing the equality and freedom aspirations of the Kurds.In this sense, for Barzani, there can be no other timing; if there is no referendum he would be obliged to call an election he would lose.

Barzani declared that he could renounce the referendum in the case of an agreement with the Iraqi central government on the share of the oil income and granted a few days’ delay. If Barzani can get what he wants from this bargain, he will use the increasing oil income not in order to realise the economic and political demands of the Kurdish people, but to fund his own “de facto” power.

For Barzani, the main issue is not the self-determination of the Kurdish people but the fate of himself, his clan and the ones who benefit from his power.

The positions of the Iraqi central government, Iran and the AKP government in Turkey

The Kurdish people lives not only in Iraq but also within the borders of Turkey, Iran and Syria. In that sense, the referendum in Iraqi Kurdistan is an utmost concern for these countries too. Although the initial position of the Iraqi central government was not so unyielding, it is hardening the tone of its refusal. Recently, the Federal Supreme Court of Iraq declared that they have suspended the referendum until they can reach a verdict on the complaints about the unconstitutionality of the referendum. Iran declared that they will not recognise an independent Kurdistan, annul all their treaties with Erbil and impose a blockade on this region.

Among the powers of the region, the Turkish government is the one on best terms with Barzani. The Turkmens of the region are being rather neglected. One of the main reasons of that is the exclusion of the predominantly Shiite Turkmens by the sectarian Turkish foreign policy. The main driving factor is the interests of the Turkish colonialist capital who seeks to get a share of the oil in the region by patronising Barzanistan. However, the contradictions of the domestic policy impede the implementation of this strategy. Erdogan and the AKP refrain from coming to be at loggerheads with the MHP, the fascist party supporting the government, over this issue. In respect to the Turkish army, let alone a confrontation with the army over this issue, Erdogan and the AKP handed over the control of their policy regarding the Kurdish question to the army.

This is why Erdogan pointed at the MGK (National Security Council, composed of the civil members of the government as well as the top brass) as the ultimate decision maker. He implied that the MGK, whose bimonthly meeting was brought forward to 22 September, three days before the referendum, might take a firm stand against the independence initiative of Barzani. This firm stand might go as far as considering the declaration of independence as a reason for a military intervention. But all in all, they would not refuse beforehand the option of “the realisation of the referendum without the declaration of independence”. This option would both appease the army and not hinder the colonialist big capital seated at the Divan Hotel in Erbil, gazing upon the Kurdish oil.

The priority of the colonialist capital is not to isolate Barzanistan or to crush it militarily but to patronise it and get a share from its oil. This is the reason why Çavusoglu, the Foreign Affairs Minister of Turkey, offered to be the broker and guarantor of a bargain between Barzani and the Iraqi central government over the oil.

Just as Barzani is not the representative of the demands and will of the Kurdish people, none of the above-mentioned positions uttered by these governments represent the interests of the Turkish, Arabic or Iranian peoples. What lies behind these political positions is the colonial interests of the capital.

The position of the US imperialism

While Iraq was being invaded by the US imperialism, the collaborating Kurdish leaders and above all Barzani, who had been accomplices of the invasion, explained this position by saying that “the Kurds should seize the opportunities for freedom”. The invasion, which caused a death toll of 2 million in Iraq did not bring freedom to the Kurds. It sowed discord among the Kurds and the Arabs. The US imperialism who separated the Arabic people on a sectarian basis and pitted the Kurds and Arabs against each other, created its dominance on this ground and continues to pursue the same policy.

The US objection to the referendum on the basis of its timing originates from its unwillingness to lose its domination over Iraq. The US imperialism, who brutally used the sectarian card while overthrowing Saddam, is the force who created the fertile soil of sectarianism on which DAESH bloomed. Now, it is afraid that supporting Barzani in the referendum might mean alienating the Shiite Arabs and pushing them towards Iran. This is the reason why in the latest declaration of the White House, the referendum is considered “provocative and destabilising” and call is made for it to be “called off”. The US is concentrated upon dominating not only Kurdistan but whole Iraq.

The position of the Israeli Zionism

Israel, the illegitimate Zionist entity, seems to be the main proponent of an independent Kurdistan. But what Israel desires is not the liberation of the Kurds but the increase in the hostility between them and the Turkish, Arabic and Iranian peoples. That is to say freedom of the Kurds on the basis of fraternity of peoples and their common struggle is diametrically opposed to the interests of Israel. With the carte blanche it gives to the illegitimate power of Barzani, Israel is trying to render Kurdistan an extension of its illegitimate existence and therefore make it impossible for Kurdistan to survive without becoming an imperialist and Zionist military base against the peoples of the region, and above all Iran.

The Zionist propaganda is trying to offer Barzani to the Turkish capital with the gild of sectarianism. There are many, among AKP members, who champion this idea. A considerable sector of the AKP who defend the patronage over Barzani claims that otherwise Iran would gain ground. In the Kurds, these people see a Sunni community to pit against Iran and not an equal and fraternal people. And for the Turkish capital, if the issue is obtaining the oil, it doesn’t matter how to obtain it. Because, in any case, the spilled blood will not be theirs.

Barzanistan would not mean freedom but servitude for the Kurdish people

The main goal of the Barzani administration is crystal clear. It will not work to bring about freedom and equality for the Kurdish people after achieving that goal and consolidating its power. Barzani overtly says that the victory of the yes vote in the referendum would not mean a declaration of independence. That is to say that he would try to use the referendum as leverage. But since Barzani does not draw his strength from the people and is also afraid to death from the independent organisation of the people, he would immediately be forced to hand over this leverage immediately to the US imperialism and Israeli Zionism, and to a certain extent, to the Turkish capital and government. Under the direction of Barzani, it is inevitable for Kurdistan to come under the domination of one or all of these powers.

This is not freedom and equality but a new form of servitude. The entity of Barzanistan, beyond being hostile to Iran and Iraqi Arabs with the guidance of Israel, would also try to undermine the Kurds in other countries. As he already did time and again, Barzani would be the accomplice of the oppression of the demands of the Kurdish people in Turkey, let alone supporting it.  In addition to that, it is impossible to undertake the sale of the oil of Barzanistan to Turkey without crushing the Kurdish movements in Turkey, who pursues an independent line from Barzanistan.

The position of DIP: Peace with the Kurds, wage war on the imperialism and Zionism!

As the Revolutionary Workers’ Party, we defend that the servitude of the Kurds does not serve the Turkish, Arabic and Iranian peoples’ interest, that a nation oppressing another forges its own chain and that those who benefit from the colonisation of Kurdistan are the colonialist capitalist classes and the imperialism.

In addition to exposing the reactionary nature of Barzanistan and revealing the imperialist, Zionist plans, we consider addressing to the Turkish working class as our main duty. Equality and freedom of the Kurds are not a threat against the Turkish workers. The real threat is the imperialism, Zionism and colonialist capital. The capital is ready to shed the blood of the Turkish and Kurdish workers in order to transmit the Kurdish oil via Turkey. The imperialism and Zionism seek only to obtain another base, in addition to NATO-member Turkey. They are rather delighted that due to the nationalistic propaganda, the rage of the people is directed towards the Kurds, and not towards them. Making peace with the Kurds serves above all the interest of the Turkish workers and is the biggest fear of the colonialist capital, imperialism and Zionism. The common struggle of the Turkish, Kurdish and other peoples is the only path towards the victory over the imperialism, Zionism and colonialism.

Yes to fraternity, equality and freedom of the Kurdish people and all the peoples! No to Barzanistan!

No to the military intervention of Turkey and other countries of the region and to a blockade against the Kurdish people!

Turkey out of NATO! Shut down the Incirlik Base!

The imperialists, Zionists, colonialists get out of Kurdistan!

The imperialists shall go away! Israel shall be destroyed! The equal and free future of the Turkish, Kurdish, Arabic and Iranian people shall be formed with the Socialist Federation of the Middle East!

Central Committee of the Revolutionary Workers’ Party (DIP) of Turkey