DIP: United struggle against the reactionary coup in Bolivia! 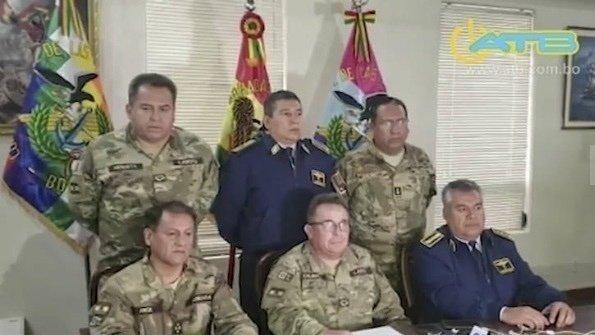 We are publishing below the English translation of the statement DIP (the Revolutionary Workers Party) issued in Turkish on the very first day of the coup in Bolivia. This is why it does not refer to the phenomenal mass movement that erupted against the coup later, starting with the march from the city of El Alto neighbouring La Paz and using the slogan “Ahora sí, guerra civil!”, putting a civil war on the agenda. Support for this movement is the key to any serious opposition to the coup. Given the right conditions, the defensive struggle against the coup can even turn into a revolutionary crisis. (Note added by RedMed)

A new reactionary military coup d'Etat has taken place in Bolivia, a Latin American country whose history is filled with revolutions and military coups. President Evo Morales, who has ruled the country since 2006, was overthrown. Morales, who advanced the rights of the indigenous peoples of Latin America in this Andean region and pursued an anti-imperialist policy as the most important ally of the chavista movement of Venezuela after Cuba in international politics, was attracting the ire of the Bolivian bourgeoisie and of Latin American finance capital. This coup has a reactionary character in terms of both cementing the imperialist domination on the continent and suppressing the just demands of indigenous peoples.

The way this coup developed clearly demonstrates this. Having mobilised reactionary masses hostile to indigenous peoples, the general staff of the army, police chiefs, and right-wing politicians declared the end of Evo Morales’ presidency. In addition to the official statement of the coup, the homes of Evo Morales, several mayors, and others were arsoned, trade unionists and ordinary individuals from indigenous peoples were assaulted, faced violence and an indigenous woman was murdered.

In the face of these developments, Evo Morales resigned. Morales’ resignation is consistent with his earlier policies. Morales was elected president for the fourth time on 20 October. But his political nemesis, the ex-president Carlos Mesa and his supporters took to the streets to demand a second round, saying the election was rigged. Another right-wing politician, Luis Fernando Camacho also played a big role in the demonstrations. The essence of this demand for democracy was laid bare when the police took sides with the right-wing demonstrators in many cities. Morales accepted the offer when the Organization of American States (OAS) took the initiative to investigate the alleged election fraud. However, OAS is a reactionary organization that also horbours the USA as a member. It was formed to keep Latin America under the control of imperialism and Latin American finance capital. At the beginning of this year, the reactionary Lima group, which was led by Brazil’s president, the fascistoid Bolsonaro and supported the Trump administration’s move to overthrow Venezuelan president Nicolas Maduro, also emerged from within this organization. Morales, by accepting the arbitration of this organization, declared thereby that he would accept to submit to the judgment of imperialism. The OAS ruled against Morales. Upon this, as soon as they received the approval of imperialism and Latin American finance capital, the coup plotters mobilized.

The claim that the coup defends “democracy” is a complete lie. No one disputes Morales’ lead in the elections. The whole debate is about whether he has received enough votes to be elected in the first round. But instead of ignoring these accusations, Morales chose to allow investigations for election fraud. Therefore, neither the justification of the overthrow nor the attempts to arrest him can be justified.

Evo Morales, contrary to the claims of the majority of the international left and the socialists of Turkey, is not a real socialist, just like his Venezuelan allies. He is a member of a Latin American nationalist (i.e. Bolivarian) movement. This is why, faced with the coup threats, he chose not to mobilise the workers and peasants of Bolivia, whose history is filled with revolutionary initiatives, against the reactionary insurrection but instead tried to negotiate with the bourgeoisie. These very same working classes rose against the imperialist pillage of the nation’s natural gas reserves in 2003 and 2005 and created a revolutionary crisis where they even took control of the capital city.

Despite all these, Morales and his party MAS represent a relatively progressive line for defending the rights of the indigenous peoples, oppressed for centuries, for struggling against imperialism and for its friendship with Cuba. The coup d'Etat against Morales is a new step in the attempt by the Trump administration and the reactionary Latin American bourgeois  governments led by Bolsonaro to crush this anti-imperialist Latin American front.

One of the conditions for supporting the revolutionary movements of the peoples of Latin America, with its most advanced expression in Chile, Ecuador and Haiti, is the defeat of imperialism’s policy of taming unruly governments across the continent. Those who try to overthrow bourgeois-nationalist anti-imperialism today will tomorrow wage a full-on war against peoples marching towards socialism.

For a united struggle to defeat the coup in Bolivia!

Down with imperialism! Down with the reactionary policies of Latin American finance capital!

Long live the revolutionary struggle of the peoples of Chile, Ecuador and Haiti!