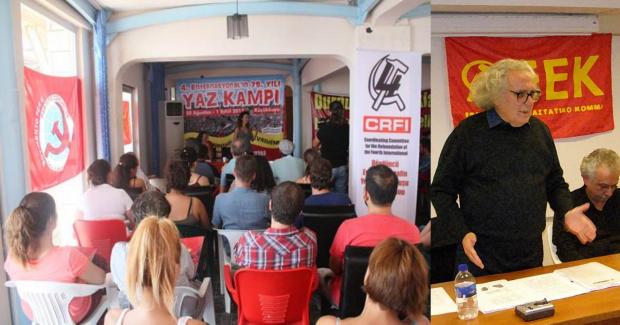 The summer camp of the Revolutionary Workers Party (DIP) of Turkey was held on 28 August-1 September 2013 on the Aegean coast of Turkey facing Greece. The camp was titled “The 75th Anniversary of the Foundation of the Fourth International: From the popular revolt to a workers’ revolution”. Filled with political debate and education in the aftermath of the popular revolt of this past June-July and workshops conceived to develop the organisational skills of its militants, the camp also paid homage to the great Turkish poet Nazim Hikmet and hosted a play on Marx (Howard Zinn’s Marx in Soho), as well as displaying artistic events by the participants.

On the last day of the camp, to the accompaniment of hearty applause, the participants of the camp approved the following declaration on the case of Savas Mihail-Matsas vs. the Golden Dawn.

The trial against Savas Mihail-Matsas, Secretary General of the EEK (Workers’ Revolutionary Party), Greek section of the Coordinating Committee for the Refoundation of the Fourth International, upon the initiative of the Golden Dawn, the fascist party of Greece, is of utmost significance for the period we are going through.

1) Greece is a country where the contradictions generated by the deep economic crisis that has taken the whole world into its grip since 2008 are being experienced in the most savage forms not only when compared to the rest of Europe but in a worldwide context, where class struggles are unfolding on a grand scale as a result of this, and where a political crisis of serious proportions is born. The parallel growth of the left and the fascist movement in the country makes it clear that a radical confrontation will be experienced in the future. This attack by the Greek state on our comrade has demonstrated that, faced with this polarisation, Greek “democracy” will take the side of fascism. It also proves that the revolutionary Marxist movement is fighting in the front ranks of the left against the fascist plague.

2) The rise of fascism is by no means restricted to Greece. In many countries of Europe, from Bulgaria, Hungary and Austria in the east to Great Britain in the west, from France on the Mediterranean to the Netherlands, Belgium and Finland in the north, fascist, neo-fascist or proto-fascist movements are on the rise in the context of the world economic crisis, after a long period of incubation. In Turkey, on the fringe of Europe, a strong and deep-rooted fascist movement is waiting in the wings for the failure of the reactionary AKP government. The trial against Savas is really the first skirmish between fascism and revolutionary Marxism in Europe.

3) The great success of the reformist and left-wing liberal Syriza in the Greek elections of 2012 has created the prospect of the limitation of the anger against capitalism displayed by the working class and the youth to the framework of the established order and thus ultimately of a defeat for the popular movement. Our sister party the EEK made a first leap forward in the spring of this year in acting to point out the source of a great threat to the workers and youth of Greece when Comrade Savas published a collection of his articles on the Golden Dawn. Now this trial has made it clear for all to see who the real actors of the class struggle are in times of deep crisis: fascism on one side and revolutionary Marxism on the other. This trial has created an environment in which revolutionary Marxism can reach out to great masses of the people. We must extend this struggle started by the EEK to other countries of Europe.

The participants of the Summer Camp 2013 of the Revolutionary Workers’ Party (DIP), “The 75th Anniversary of the Foundation of the Fourth International: From the popular revolt to a workers’ revolution”, transmit to Comrade Savas their sentiments of solidarity and affirm once again that this is our common fight.

Drop all charges against Savas Mihail-Matsas!

Long live the revolutionary struggle of the working class!