DIP Statement: We are at two wars, not one! 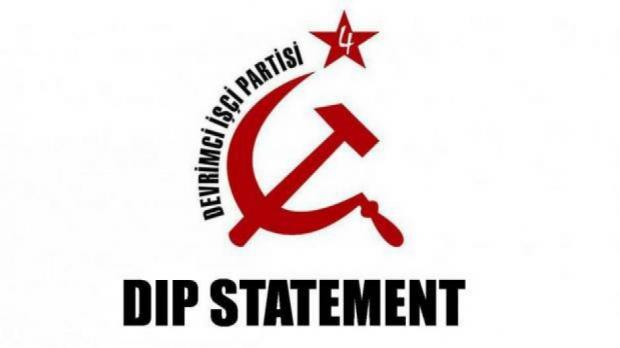 DIP has so far issued four statements in Turkish on the Coronavirus and published an additional three critical assessments on different aspects of the question in its electronic media. The first statement, an overall action plan titled “Against the Coronavirus, priority not to profits, but to the defense of life!”, was published on 10th March, before the first official case of Coronavirus on Turkish territory was admitted on 11th March. This action plan covered very many areas, including demands concerning the provision of all basic necessary medical items to all by the state free of charge, the expropriation of all enterprises that stand in the way of this, the reordering of work and health conditions in all factories and workplaces, the provision of special protection measures to vulnerable populations of crowded institutions such as prisons and barracks, the protection of the refugees, asylum-seekers and immigrants living under dire conditions, the work and medical protection conditions of doctors, medics, and all health workers, the immediate provision of more buses to municipal mass transport companies so as to avoid crowded travel conditions and many others. In order to put all of this in effect, the action plan advocated the overseeing of all measures by the trade unions and professional organisations of the medical staff, the formation of workers’ control in factories and workplaces so as to oversee the measures taken to protect workers from conditions of work and travel in crowded environments, and the keeping of police and the military away from both measures of disinfection and supervision of “stay-home” practices, demanding the mobilization of medical and nursing college students instead.

Immediately after the action plan came an analysis by DIP of the stock market crash worldwide and in Turkey, putting the effect of the Coronavirus in its place as no more than a detonator and stressing the already fragile situation of the capitalist world economy, artificially propped up since the onset of the Third Great Depression in 2008.

After the admission of the presence of Coronavirus cases in Turkey, the situation soon became one in which “stay-home” was the rule for the upper and upper-middle classes, with many being able to work from home, and the sending of workers and toilers en masse on the streets, to travel in crowded municipal buses and special shuttles, and to work in factories and workplaces without any hygienic measures at all. DIP immediately came out on 14th March with what we call the “factories statement” demanding priority to the life of proletarians over profits, putting forth many measures including the shortening of the workday so that both parents could look after young children alternately, now that schools were all shut down. The “factories statement” was used in the form of leaflets or, more fittingly for the health emergency which makes workers avoid one-on-one contacts, as wall newspapers in many working class cities, including near factories.

The first death in Turkey from the Coronavirus came on 17th March, immediately after which Erdoğan went on television to open a “Shield” of a package of economic measures in the face of the collapse of the financial markets. Only 2 billion Turkish lira out of a total 100 billion were set aside for families in distress, the rest going to bail out capitalists, large and small. DIP put out a criticism on the same night, 18th March, of this “Shield for the capitalists” on its web site and has ever since insisted in all its statements on the allocation of all public resources to the fight against the virus rather than on bailouts for capitalists.

On that same day DIP also issued a new statement on the plight of health workers titled “Health workers fight on the frontline for the health of the people and their demands must be met immediately”, calling, among many concrete urgent actions, for the expropriation of textile factories in order to produce special clothes of all types for health workers.

On 20th March DIP published on its media a criticism of the government’s reluctance in taking action in prisons, which will soon prove to be hotbeds of Coronavirus infection, killing many of the over 300 thousand inmates, a lot of them, especially the political prisoners, journalists and others held for “crimes” of opinion, are not convicts but are held as detainees pending trial, which means legally speaking they must be presumed to be innocent. Thus this policy of keeping political detainees akin to hostages in prison might very well turn into a policy of “let die” of innocent people.

The text below is the most recent of these statements to date, issued on 22nd March. It is a result of the deliberations of the Central Committee of the party, whose outcome may be summarized as not giving in to the “stay-home” policy as long as workers are forcibly out in streets and crowded workplaces. DIP is determined to be where the workers are.

A few days ago, French president Emmanuel Macron started off his address to the nation on the Coronavirus pandemic with the following words: “We are at war”. Since then, the metaphor of humanity at war against an invisible enemy has become commonplace everywhere. However, the notorious “president of the rich” Macron, the restless warrior of the French bourgeoisie, might be possibly meaning something else when he says “war”: the war the bosses have declared on the working class and the laborers to protect their profits! Yes, in France as well as in Turkey and the entire capitalist world, there are two different wars.

The Coronavirus pandemic stripped away all masks and laid bare the class structure of capitalist society in Turkey and globally. The country is split into two. The rich and the capitalists are pushing the workers, the laborers, and the poor into the shooting zone of the virus. In Turkey, the “stay-home” campaigns are going viral just when the working class is led en masse into factories to generate further profits for the bosses. As their profits decline nonetheless, the bosses force states to their own service: governments announce bailout packages to save the bosses from loss rather than to save the people from the epidemic. The last₺100 billion-worth package Erdoğan has announced in the wake of the international stock market meltdown is exactly such a measure.

Healthcare workers are fighting on the front lines. Yet thousands of foot soldiers of healthcare resemble troopers in summer uniforms sent to the fronts in freezing winter. They lack the most basic protective supplies. There is too much work and too few personnel. The resources are meager. Under the administration of the current minister of health (himself a private hospital owner), private hospitals are still kept away from the front so that they can keep profiting until the very last moment. The doctors of the private hospitals are touring TV channels and propagandizing instead of fighting on the front lines.

The current government in power is fixated entirely on saving the profits of the capitalists and its own public image. They are leading the whole affair step by step towards a curfew. It wouldn’t be surprising if those who have allocated 100 billion Turkish lira to bail out the bosses decided to use the curfew to pick up those who mount opposition on the social media from their homes. Stop spending social resources to save the bosses! Stop making use of necessary practices to silence the people!

Today, the population must fight against both the virus and the capitalists and their governments. These two wars cannot be separated!

A reckoning between classes

Countries that went through this process before Turkey reveal the bitter truth we will be facing. Italy pulled off the patients in severest conditions from respirators and abandoned them to death due to lack of respirators. The government of Italy is trying to convince automotive companies (such as Fiat, Ferrari, or Marelli) that have factories capable of producing these respiratory apparatuses. Doctors are forced to decide which patients will die, because there are not enough respirators. And humanity is trying to convince the industrialists to produce those apparatuses!

We are witnessing a major irony of history. The members of the working class, who have struggled risking their lives for the right to be on the streets and squares, are now demanding a street ban! The reason is that in a country where the calls to stay at home are going on day and night, workers and laborers are forced to stay outside! They are forced into the factories! And for what? To produce cars, car components, refrigerators, TVs, and cocktail dresses – just when the entire country should be on the march to fight off the pandemic and allocate all its resources and labor power to this goal!

This is the day when the neoliberal policies of attacking the workers and laborers have gone bankrupt after four decades. The stock market that had been propped up through artificial measures since 2008 is now collapsing and this has become the talk of the town. Yet more importantly, the reason for humanity’s desperation in the face of the Coronavirus is neoliberalism’s four decade-long onslaught on the public health system. The virus has already spread into 120 countries across the world. The Coronavirus pandemic is exposing blatantly that, at this point of capitalism’s development, the problems of humanity are thoroughly international and that solutions should be sought on an international level. The issue is not a reckoning between nations, but one between classes; this is so in every country. The class-based split experienced in Turkey is experienced also in Italy, France, Spain.

We are fighting not only against the virus pandemic here. We are also fighting a war that the capitalists have declared on the working class, first and foremost, and the rest of humanity at large!

This war shall be won at the front, not at home or on the social media!

We need to win both wars. And these wars shall be won neither at homes or balconies, nor on the social media, but on the battlefield, like all wars. Those on the battlefield are the workers and laborers. There has not been another moment in history when it was clearer that humanity shall win this war only and absolutely under the leadership of the working class.

We don’t need to convince the bosses! Forward to workers’ control!

Chambers of engineers should mobilize and plan for the transformation of the factories. University students should run to the frontline for both planning and production! Factory committees should take up the control of production as well as the enhancement of health conditions in the workplace! No car or TV shall be produced if there are no respirators in the hospitals! No garments shall be produced if the healthcare worker doesn’t have a mask or protective clothes!

All social production needs to be planned and focused around the needs of the fight against the pandemic. Foodstuff, medical supplies, medicine, distribution, and energy are the sectors of strategic importance and should be socialized without compensation and under workers’ control and mobilized under central planning. The commanding heights of the economy – big industry, mass transport, telecommunications, technology companies – and, most importantly and for the purpose of the effective and planned allocation of resources, all banks should be socialized immediately! This is not a matter of choice between different economic models – this is a life-or-death struggle for the country!