DIP statement: Not negotiations with imperialism but anti-imperialist struggle! Turkey out of NATO! Shut down Incirlik! 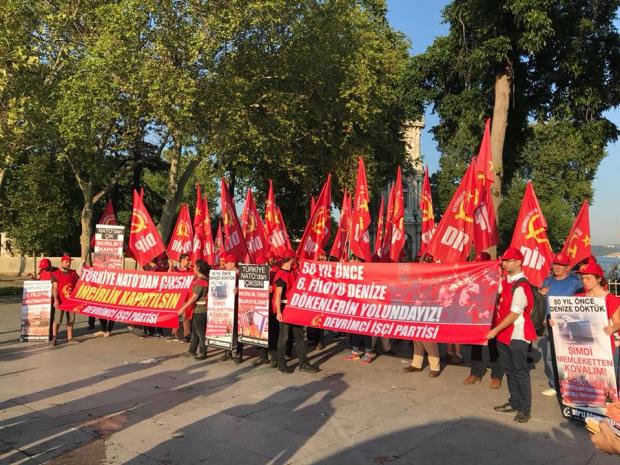 One of the important contradictions that shape the political situation in the Middle East is the growing tension between two NATO members, Turkey and the USA. This tension came to a head last week, when the US Secretary of the Treasury announced the imposition of sanctions on two senior ministers in the administration of Erdoğan. The immediate reason was the fact that an American Evangelical pastor, Andrew C. Brunson, has been incarcerated by the Turkish judicial system for close to two years for allegedly assisting the organization, led by the notorious imam Fethullah Gülen, deemed to be behind the failed coup of 15th July 2016,. While certain sectors of the left including the Kurdish movement were happy to see the US attack the Turkish government and others were simply paralyzed, the Revolutionary Workers’ Party (DIP) took a clear anti-imperialist stand without extending an iota of support to the government of Erdoğan, around which the entire bourgeois opposition united. We publish below the English translation of the statement put out by DIP immediately (posted on its web site on Friday, 3rd August).

The United States began its sanctions on Turkey referring to the situation of Pastor Brunson, who was decided by court to be removed from jail but kept under house arrest as the case proceeds. The US Department of Treasury has announced that sanctions will be imposed on the Turkish Minister of the Interior, Süleyman Soylu, and the Turkish Minister of Justice, Abdulhamit Gül, in direct relation to Brunson's case. The two ministers’ assets in the United States were frozen and American citizens were banned from doing business with them.

Both Süleyman Soylu and Abdulhamit Gül are no businessmen that stand out with their assets and commercial ventures. Therefore, the political aspect of the sanctions is more outweighing than the economic. The aim of US imperialism is to teach Turkey a lesson to remind that Turkey is dependent on it. Indeed, due to the dependent nature of the Turkish economy on foreign finance, the dollar/lira parity quickly climbed over 5 lira to the dollar after the announcement of the sanctions that were qualitatively political. Berat Albayrak -the Minister of Treasury and Finance and Erdoğan’s son-in-law- said the effects of sanctions would be limited, which sounded like whistling in the dark. This is because US imperialism continues to hold a series of weapons, especially the Halkbank case, which involves the overrunning by the bank of sanctions against Iran. The decision on the F-35 aircraft is sent to the US president after being ratified by Congress. The bill that will cause a prohibition of loans to Turkey has been passed in the House of Representatives and reached the Senate.

Whatever the reasons are, US sanctions are an imperialist imposition. They are neither right nor legitimate. It is not a secret that the judiciary in Turkey is not independent. However, it is the US itself, who holds Hakan Atilla –a top executive of Halkbank- as a political hostage, while the case itself is being held as the sword of Damocles on the Turkish economy. We do not know if priest Brunson is guilty or not. But also, we cannot doubt that US imperialism is guilty against all the peoples of the world and is the archenemy. Wrong policies pursued by the government of Turkey do not bring any rights or legitimacy to the actions by the USA. It is naive to look at the actions of the United States and be pleased to see that they weaken the existing government. Actually, it is to ignore the uncompromising contradiction between the interests of the working people and imperialism.

We have been saying for a long time that the struggle against US imperialism is concrete and a burning agenda of Turkey. This struggle must absolutely lean on the mobilization of the working people, the only way one can succeed. This is true since the current government is not consistent in its opposition to the US imperialism and rather their real intentions are to improve relations with it.

It is necessary to focus not on the crisis with the US, but how that crisis will be resolved. The politics of Erdoğan and his party, the AKP, is not to fight imperialism but to bargain with it. The concept constantly repeated is "the strategic alliance with the USA". The biggest threat the government hurls against the United States is that "they would be losing their closest ally". Also, mentioning the principal of reciprocity regarding sanctions against the United States is meaningless since the USA is not in equals with Turkey. An imperialism-dependent country should not confine itself to a diplomatic retaliation but must wage an anti-imperialist struggle to abolish this dependency relationship. For example, if one decides to freeze the assets in Turkey belonging to US ministers, just as the US did, the only thing to be damaged would be the Turkish economy. Because, Turkey's economy is dependent on the American currency, and the USA does not have the slightest dependence on the Turkish lira.

The USA sells F-35 aircraft to Turkey and in return, cement and copper is sold to the US by Turkey. It is the United States which holds the veto card on loans to be given to Turkey by international financial institutions. Turkey has no military bases in the USA. Besides the Incirlik Air Base under its direct use, in Turkey there are dozens of bases where US military operates through NATO. Under such circumstances, talk about “reciprocal retaliation” is empty chatter.

On Friday [the 3rd August], the USA and Turkey will hold a meeting of foreign ministers. The "sources" are said to expect positive results. We do not know whether Brunson and Gülen [the imam who resides in the US and is held for the failed coup of 15th July 2016] would be exchanged, so we do not know what positive results are meant. However, we warn our people that they should never be deceived. It is not possible to win in a bargaining with the USA. The United States will not take a step only for Brunson. It will not be a victory, even if later, although unlikely, there would be an exchange of Gülen and Brunson or the Halkbank case would be closed with a small penalty. Because there are recent examples witnessed where the USA seemed to make concessions to Turkey but in return made use of the Turkish Armed Forces (TAF) in particular, in accordance with their policies. We’ve seen this in Jarablus and in Afrin. The backbone of the NATO corridor that was established in the west of the Euphrates River in Northern Syria is the TAF. The pro-NATO, pro-American coup of 15th July 2016 failed, but the role played by Turkey in NATO increased significantly as well as new NATO bases are established within the country.

The remark by the American magnate George Soros to the effect that “the most important export commodity of Turkey is its army" gives direction to that of US policy on Turkey. As for Turkey, the army is handed over to former chief-of-staff/present Minister of Defense Hulusi Akar, who holds an American award of merit. The "positive results" expected by such a government and the imperialist powers can very well be a harbinger of disaster for the peoples of the region. In particular, the USA should never be allowed to make use of Turkey in its operations in Syria and against Iran. All secret diplomacy should be denied and negotiations should be demanded to be made public.

The answers to the impositions of US imperialism are obvious. NATO and US bases should be shut down, beginning with Incirlik. Turkey should immediately get out of NATO. Convertibility of foreign currency should be abolished in order to end the dependent nature of the economy as well as closing the stock  market, leaving the customs union with the EU, and establishment of government monopoly over foreign trade. Foreign debt should be rejected. Against market anarchy, key industrial sectors and banks should be nationalized, beginning with an expropriation of foreign capital and their partners. This is not a program to negotiate with imperialism but one that aims to break up imperialist chains. Turkey cannot reach this with the existing despotic regime. The road to the emancipation passes through the re-constitution of Turkey on the basis of interests of working people, by an unchained constituent assembly and a government of workers and toilers.