DIP Statement: No to US coup d’état in Venezuela! 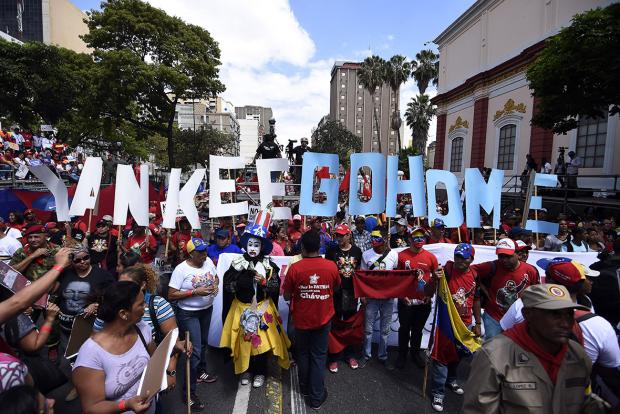 US imperialism has taken direct action in order to overthrow Maduro, the legitimate president of Venezuela and to establish a government that will act as a puppet for imperialism. Guaido, who has declared himself president after the failed coup attempt that was openly supported by US Vice President Pence, is not a legitimate leader but a puppet. He is backed by US imperialism, not the will of the people.

Legitimacy claim of the annulled National Assembly, against the Constitutional Assembly is idle. Any institution that has become or has been made the instrument of imperialist intervention cannot be legitimate. Recognition of Guaido neither by Donald Trump in the name of US imperialism, nor by Donald Tusk in the name of EU imperialism, nor by the states that are dependent on imperialism, lining up before these imperialist powers provide him legitimacy. On the contrary it only proves that he and all the coup plotters are puppets of imperialism. Alongside other Latin American states of Colombia and Paraguay which recognized Guaido after Trump comes Brazil in which Bolsonaro with a fascist tendency has taken over, which clearly demonstrates that everything was prepared according to a plan and the aim is to stage a coup d’état.

Revolutionary Workers’ Party (DIP) supports the resistance of the people of Venezuela against the coup d’état and calls for the working class of Turkey to be in solidarity with the toiling people of Venezuela. A potential victory of the coup will be a victory of reactionaries, from Trump to Bolsonaro, who follow the path of fascism, not a victory of democracy. These villains who hide their racist, reactionary, anti-worker, anti-toiler faces under the mask of “universal suffrage” stand ready to break the resistance of the people of Venezuela with military means, to drag Venezuela towards a bloody civil war, and even to straightforwardly occupy Venezuela.

Apart from reserving all our criticism towards Maduro and his party, we support Maduro’s decision to cut all ties with the USA calling US diplomats to leave the country. Turkey’s government seems to support Maduro by word, because Venezuela processes close to one billion dollars’ worth of its gold in Turkey, so because of economic interests. We are at a point where words fail and actions gain value. The only meaningful support to Latin America from our region will be Turkey leaving NATO and closing all the US military bases starting with Incirlik.

Turkey out of NATO immediately! Close US military bases, starting with Incirlik!

Down with US imperialism and its puppet coup plotters!

The toiling people of Venezuela are not alone!