DIP Statement on Idlib: Pull the troops out! Get out of Syrian territory! 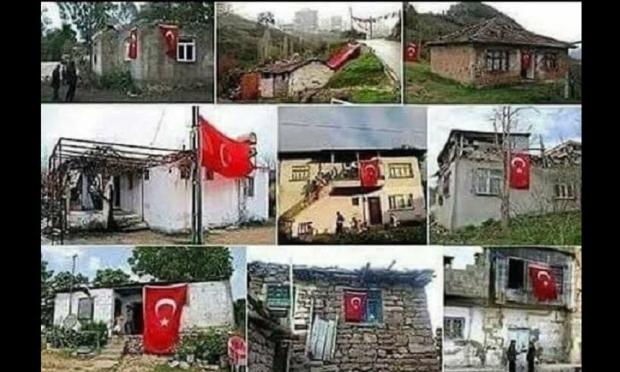 The text below is the English translation of DIP’s statement in Turkish on the Idlib war. The statement in Turkish was posted on the web site of DIP (www.gercekgazetesi.net) on the 29th February, one day after the air bombardment in Syria’s Idlib province on the night between 27th and 28th February. Only a few additions were made to the text of the Turkish statement in order to provide background information to the international reader on some issues. The photograph above shows the homes of some of the dead soldiers, displaying the fact that these are humble cottages not even painted properly because the families in question cannot afford it. It is always the sons of the workers and the poor that die on the military front.

After the heavy air bombardment conducted on the troops of the Turkish Armed Forces (TSK) on the night of the 27th February, it has become clear that Turkey is engaged in an undeclared war with Syria and Russia. With the death of at least 36 soldiers on a single night, the whole country has grasped what kind of a quagmire the Erdoğan government has dragged Turkey into.

Who has made the decision to engage in this war and where and when? The people heard of the decision to go to war with Syria, with the date fixed as the end of February, in a speech Erdoğan made earlier that same month during a parliamentary group meeting of his party, the AKP. And yet the power to declare war belongs to parliament. Having monopolised all powers in every sphere of life, the president of the republic now trespasses the limits of even those powers and has dragged Turkey into an undeclared war. And then, when the bitter fruits of that decision came about, he laid the burden of announcing the deaths of dozens of young soldiers on the provincial governor of Hatay, where the corpses of the dead soldiers were sent because it is the Turkish province nearest Idlib.

While all of this is happening before our very eyes, it is astounding and inadmissible that the parliamentary opposition of bourgeois parties demands a “closed session” of parliament. No! On the contrary, parliament should hold a perfectly public debate when discussing a matter that concerns the life and the welfare and the future of the people and their children. Let no one take refuge in military secrecy. A decision to start war is not a military decision. It is an eminently political decision.

In whose interest is this war being waged and to what ends? The government and its henchmen say the defence of the security of the country starts beyond the borders. However, there is not a shred of doubt that the Syria policy of the AKP government has nothing to do with Turkey’s security, however that may be defined, and everything to do with the ambitions of Erdoğan’s Rabiism of domination over the entire Sunni Arab world. The government’s Syria policy has been the epitome of this ambition. The whole world has heard of the incantations about marching on Damascus and praying in the Umayyad Mosque in that city! Is it possible not to notice how the entire media of the AKP have been discussing the beginning of the repartition of the Middle East, which, according to them, dictates that Turkey share in the booty? Is it possible to hide the mention by Erdoğan of the “Red Apple”, that symbol of Turkish expansionism, as a reason for the earlier march on Afrin? This war is not meant to “protect the rights and interests of Turkey” as the statement from Erdoğan’s office says, but to contribute to the expansion of the AKP’s domination over the Middle East and North Africa. Turkey must immediately cease this policy and pull all its troops out of Idlib and Syria!

Moreover, there is another reason why the argument that the defence of the security of the country starts beyond the borders is false: the highest security risk for the labouring people of Turkey, that is the military bases of US imperialism and of NATO, are inside the borders! It is tanker aircraft that took off from the Incirlik base that refuelled the F-16’s which bombarded parliament on 15th July 2016, the night of the failed coup. The so-called counter-insurgency agency, centrepiece of the famous deep state of Turkey, which orchestrated the attacks on the working class and the assassination of the trade union movement in the past is the Turkish Gladio that was established, financed and directed by the very same US and NATO. All the military coups in the modern history of Turkey were effected with the permission, and even at the instigation of the US.

It is again US imperialism that paved the way that led to the present war between Turkey, on the one hand, and Russia and Syria, on the other. The only person, apart from the governor of Hatay, who spoke on the night of the disaster of 36 deaths was the spokesperson of the AKP, totally unauthorised to speak on behalf of the government. This strange spokesperson said that the attack was in fact an attack on NATO, thus admitting who the AKP sees as its friend and why Turkish troops were sent to Idlib. Trump’s special envoy for Syria, James Jeffrey, is the main actor in this whole scenario. Upon his arrival in Ankara in mid-February, he said, in his quite fluent Turkish, “we have martyrs on the field”, whereby he was cuddling up to Turkish sensitivities and trying to prepare the people of the country for a war on behalf of the US. This same representative of Trump had opined, several months ago, that it was time to “pull the plug on the Astana process”. He has succeeded in this endeavour without the slightest harm to a single US soldier. Now, all the pleading with NATO for it to practically intervene, all the supplications to Trump for delivering Patriots (which have so far gone unanswered) are humiliating, to say the least.

US imperialism and NATO are not a security umbrella for Turkey. They are themselves the chief security threat. It is time not to ask NATO’s assistance but to walk out of NATO! It is high time that the military bases, starting with Incirlik, be shut down! This is the only way forward for those who are working with the aim of providing jobs and welfare and security and salvation for the labouring classes of Turkey, rather than acting in the interests of the monopoly capitalists of the country, who are voraciously pursuing oil sources and markets, inflows of foreign capital and in the interests of the Rabiist dreams of Erdoğan and the AKP trying to dominate the entire region.

Besides the general policy pursued by the AKP government on Syria, its policy on Idlib in the narrower sense of the term is indefensible as well. The AKP and its media advance the argument that an international agreement, the Sochi Memorandum of Understanding of September 2018, is being violated. That agreement in fact stipulated the de-escalation of the conflict between the Syrian army and the opponents of Beshar al Assad in this province of Syria, on condition that the region be cleansed of elements considered as “terrorists” and that this be accomplished by Turkey. But rather than the region being cleansed of these forces, Idlib has since fallen almost entirely under the domination of Hayat Tahrir al Sham (HTS), an outgrowth of the Takfirism of Al Qaeda and, later, of the Jabhat-al Nusra (or the Nusra Front) that even Turkey officially considers a “terrorist” organisation! So it is Turkey that has not abided by its obligations that flow from the Sochi agreement. Just look at the deliberations in the United Nations Security Council: despite the support given to Turkey by the imperialist powers, no voice can be heard criticising Russia or Iran (the signatories of Sochi alongside Turkey) for breaching the Sochi agreement. No, the only criticism the imperialist countries voice against Russia and Syria is the plight of the civilians caught between two fires.

The Takfiri movement (of which the best-known representatives are Al Qaeda and Islamic State) cannot be characterised as “enraged youth”, as Erdoğan’s one-time premier and foreign minister Ahmet Davutoğlu characterised Islamic State at its inception. No, their real enemy consists of Muslims other than themselves. Takfirism beheads those who refuse its own way of life, shuts women up in darkness, raises fanatical children. It is a scourge for the Muslim world. The government must immediately cease its protection of Takfiris, starting with the HTS.

The peoples of the region are our brothers and sisters, imperialism our enemy!

The refugees in our country are not pawns on a board but our brothers and sisters. Of course Europe has to shoulder responsibility in eliminating the victimisation of these people. But to engage in bargaining like a merchant with imperialist leaders as Davutoğlu once said is to take a share in their oppression. The dirty diplomacy conducted on the backs of the refugees should be immediately terminated. Our appeal for the brotherhood of peoples and solidarity between them is to our class brothers and sisters in Europe and our struggle aims to overcome all kinds of chauvinism and racism.

It is the workers, the toilers, the poor and the indigent who have to bury their sons in this war and in all wars. The rest either pay their way out of the military or are sent on duty in metropolises. That is why a great majority of the toilers are against this war and do not support the Syria policy of the government. They are against the protection of and cooperation with sectarian and takfiri groups.

Let the workers and toilers of Turkey break with the definition of “national interest” and of friends and enemies as formulated by the ruling classes and by Erdoğan’s government. The ambition to grab oil sources can only serve the capitalist class. Iraq ranks fifth among countries with the largest oil resources. And yet its labouring population lives under threat of hunger, of lack of the most basic social services such as water, electricity, medical care etc. The people of Iraq have risen to fight for these and have been out on the streets since the 1st October 2019. We simply cannot and should not set our sight on other peoples’ natural resources and riches. We need to fraternise and stay friends with all neighbouring peoples.

One requirement for such fraternisation is to pull out troops that are on another people’s territory against the consent of that people. This is not accepting defeat. It is the rejection of genuflection before imperialist interests. This is not giving up struggle. It is a precondition for mobilisation for a great struggle for rights in the most virtuous manner. A war that a nation enters not on the consent and will of the poor who die on the front, but on those of the moneybag capitalists who profit from that war, with an imperialist chain on the throat on top, cannot be a just war! Whatever the  outcome of such a war, it cannot be a victory for the working people of that nation!

Pull the troops out of Idlib and Syria!

Disclose the occupations of the fathers of the dead soldiers!

Refugees and migrants are not bargaining chips! Halt the policy of stop-go at the borders!

Cut all ties to imperialists! Turkey hand in hand with the peoples of the region!

Turkey out of NATO! Shut down the Incirlik and Kürecik military bases!

Forward to the unity and fraternity of the peoples of the Middle East and North Africa!