DIP communiqué: The government ban on the metalworkers’ strike is null and void! 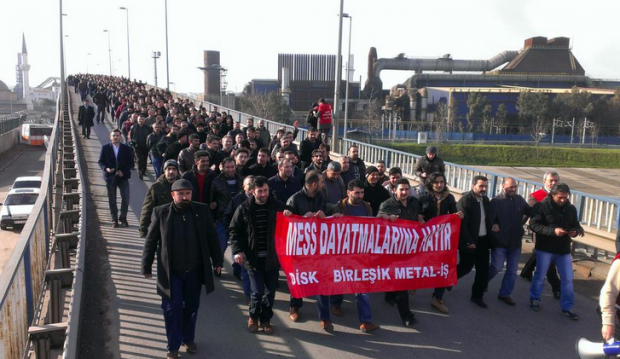 The AKP government in Turkey has now once again exposed itself as a government ruling unswervingly on behalf of the bourgeoisie. It has banned the metalworkers’ strike led by the union Birlesik Metal involving 42 enterprises and up to 15 thousand workers in 10 cities the day after it was started. The legal cover the Council of Ministers has had recourse to is a provision first promulgated by the military junta of the early 1980s stipulating the possibility of “postponement” of strikes for 60 days. There are two different reasons that the law cites as a basis for such a decision, public health or national security. The excuse used this time is “national security”! Of course, since the nation is the community of capitalists, its security vis-a-vis the working class is considered “national security”! Although the legal measure is cast as “postponement”, for all purposes this practically means nothing else but a ban, since at the end of the 60 days, the union cannot go back on strike but can only apply to the High Board of Arbitration! Only several months ago the government (with Tayyip Erdogan in the prime minister’s seat at that time) had “postponed” a strike waged by 5,600 glass workers, citing “public health” as the reason! The same fate had befallen a strike by a section of the mineworkers. It is a publicly shared piece of information that the ban (the “postponement”) this time was demanded from the government by MESS, the organisation of metal employers.

It should be remembered that this ban comes only six months after the Soma disaster, a mine “accident” in which a minimum of 301 workers had lost their lives. Turkish society then had finally woken to the rude reality of rampant subcontracting at workplaces, the hideous conditions under which the mineworkers work, the pitiful norms of occupational safety and health practiced and the constant neglect of work hazards and total disregard for workers’ lives on the part of companies haunted by the greedy pursuit of profit. But behind all this lurked the figure of Tayyip Erdogan and the AKP government, a government that had, in its long years in power, had done everything to remove the smallest barrier to the ruthless profit-seeking of companies, thereby laying the ground for this kind of collective work-related massacre. It is this self-same AKP government that now denying another section of the working class its most elementary rights.

The significance of the metalworkers’ strike

The metalworkers’ strike is very important primarily for the following reason: although it involved around 15 thousand workers, it really was being watched by hundreds of thousands of other metal workers. The metallurgical industry has become the pace-setter of Turkish industry within the last decade as white goods companies, Turkish and foreign alike, have flourished and many car companies have made Turkey a relatively low-wage manufacturing platform for exports to EU countries, given the Customs Union with the EU in force for the last two decades. Automotive products are now the item topping the list of Turkish exports and the share of the metallurgical industry within Turkish manufacturing has reached up to 40 per cent recently.

A growing work force is naturally being employed by the industry. Of the three labour unions organised in the industry, a quasi-yellow and gangster-like union called Turk Metal wields more than 100 thousand members, while Birlesik Metal, of a solidly left-wing lineage, has a membership roughly one fifth of that. (The third union, affiliated to an Islamist confederation that acts as the labour bureau of the AKP, is even smaller.) Every two or three years, a comedy is enacted between MESS, the employers’ organisation, and Turk Metal, an act that unvaryingly results in a profitable deal for the capitalists. The deal is then imposed on the other unions, for which resistance is difficult given the overwhelming power of Turk Metal.

However, there have been spontaneous revolts among the membership of Turk Metal in the past, once in the late 1990s and once in 2012. The latter occurred clearly as a result of the fact that Birlesik Metal had struck against the terms agreed to by Turk Metal on that occasion and a certain section of the Turk Metal membership, including the very important Bosch factory, passed over to Birlesik Metal. There is no doubt, a fact that we know from immediate experience deriving from activity carried out among the workers, that this time too, certain sections of the membership of Turk Metal in gigantic car and white goods factories, especially in the cities of Bursa and Manisa, were avidly watching the unfolding of the Birlesik Metal strike. So too were many worker collectives in non-union workplaces. Hence, the importance of the strike extended way beyond the 15 thousand workers directly involved.

The strike is important for the general Turkish political situation as well. This is because it could have acted as a lever to lift the workers’ movement out of its stagnation. This stagnation has been continuing since the Tekel action of 2010, when thousands of workers had set up a tent city in the midst of Ankara for 72 days. Since then there have been many dispersed struggles in different industries and regions of the country, but these remained isolated and, however militant some of them proved to be, usually succumbed in the end.

This time, the rank and file of Birlesik Metal displayed a very combative mood even before the strike started. The union hesitated somewhat before declaring a strike and the final decision was taken indisputably under the pressure of the base. In all the factories where the employers demanded a ballot (a right Turkish industrial relations law provides them with, aiming to arm them with still one more weapon against strikes), the workers voted in favour of the strike with overwhelming majorities, although for understandable reasons employers demand a ballot only in the weakest links! On the other side of the barricade, the resistance of the employers was eroding: some enterprises (starting with the two factories of Schneider, the giant electric and automation multinational) announced, even before the strike started, that they were withdrawing from MESS, the employers’ organisation, and negotiating their own collective contract, which is of course bound to be more advantageous for the workers of the company in question.

The DIP, for its part, is very much immersed in the metalworkers’ strike. We work with metalworkers from different unions or in non-union workplaces in industrial centres such as Istanbul, Izmir, Çorlu, Bursa, Manisa etc. We have distributed our leaflets in all the factories that went on strike. The Facebook site of the bulletin that we bring out, the Voice of the Metalworker, is being followed by more than 1,500 metalworkers, unionised or non-unionised.

All this has now changed with the brutal intervention of the government on behalf of the employers’ organisation. We cannot say at this point how the union and the rank and file will react to this unabashed violation of the rights of the workers. For the moment work-to-rule (slowdown) seems to be the most immediate option.

We as DIP will certainly try to do our best so that the movement does not die out completely before forcing MESS to make serious concessions. We have published a communiqué characterising the government’s decree both illegitimate and unjust and, at the same time, unlawful. The reason is that the Turkish constitution stipulates that duly signed international conventions are superior to Turkish legislation. Turkey is party to many ILO conventions, which indubitably would cast the government decree as a denial of workers’ fundamental rights, thus making it unlawful even in terms of the current Turkish system of law. In the communiqué we also declare that all mass action in defiance of this decision is legitimate.

At the same time we call on all the organisations of the international working class to express their clear condemnation of this shameful decision by the AKP government and their strong solidarity with the metalworkers of Turkey by any method they deem appropriate. Even the smallest message will help. We need to counter forcefully the ruthless exploitation the international working class is being subjected to. This is what the condemnation of government’s banning of the metalworkers’ strike in Turkey is about.