DIP attacked by Islamists for internationalism 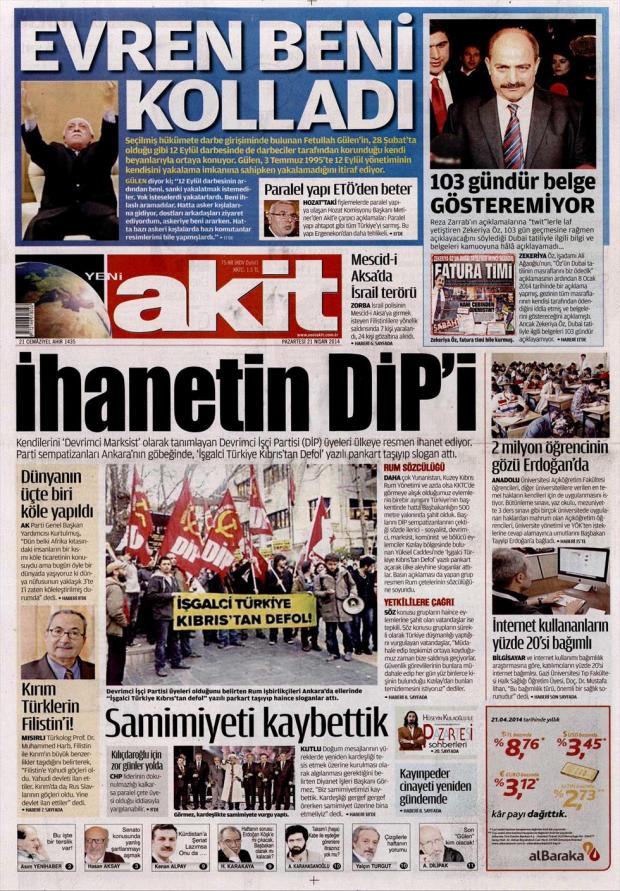 The DIP (Revolutionary Workers’ Party) has been singled out for a frontal attack by an Islamist national daily newspaper, Yeni Akit, long notorious for its vicious attacks on socialists of all tendencies. The paper has an average circulation of 60 thousand and can be characterised as the most radical Islamist paper that supports Prime Minister Erdogan and the AKP, the party in power.

On Monday, 21 April 2014, the paper’s major headline on page one read: “The DIP of high treason”. The occasion that formed the excuse for this attack was a demonstration in Ankara...three years ago, which the paper reported as if it had taken place the day before! The main banner at this demonstration read: “Turkey occupier, out of Cyprus!” This was a demonstration in solidarity with a series of actions in 2011, called “Social Existence Rallies”, in Northern (i.e. Turkish-dominated) Cyprus joined by hundreds of thousands, staged, among other things, against the Turkish military presence on the island. Hence, the DIP and the others present were simply expressing solidarity with the state of mind of the majority of Turkish Cypriots and carrying out their internationalist duty in combating the military domination exercised by their own country against a distinctly separate people, Cyprus. It should be added that one of the component forces that organised the demonstration in Ankara was the Cypriot Youth Platform in the said city.

The DIP assumes the “crime” attributed to itself, i.e. it reaffirms its commitment to struggling against all oppression exercised by its own bourgeoisie on other peoples, of which the Cypriots are, in addition to the Kurds, select victims. This year is the 40th anniversary of the deployment of troops by the Turkish state in the north of the divided island. We fight for an end to that occupation. We fight for the self-determination of the Cypriot people. We fight for the fraternity of workers and toilers of all countries including that between the Greek and Turkish Cypriots and mainland Greeks and Turks. To the eyes of chauvinists, this obviously looks like betrayal of one’s own country.

But the real gist of the problem lies elsewhere: the DIP is not fighting for the withdrawal of the Turkish occupation forces alone. It is also fighting for the withdrawal of any forces from Greece and, even more importantly, the closing down of the British bases on Cyprus, i.e. those of Akrotiri and Dikelia. These bases are the crux of the so-called “Cyprus problem”. It was to sustain its military presence on the island that Britain played the Turkish Cypriot card against the Greek Cypriot majority in the framework of a policy of “divide and rule”. The Islamists of the AKP, including the scandal-monger Yeni Akit, have never been heard of speaking up against the British bases on Cyprus for the simple reason that, as opposed to the DIP, they are loyal allies of imperialism, US and EU and British alike.

The DIP is against this treacherous setup whereby a vociferous yet hypocritical Turkish nationalism acts as a smokescreen to cover up for capitulation to imperialism. This is what disturbs the reactionaries of Yeni Akit and their ilk.

Cyprus to the Cypriots!

Shut down the British bases on Cyprus!

US, Britain and the EU as well as Greece and Turkey, hands off Cyprus!

For an independent, united, socialist Cyprus!