Declaration of the EEK (Greece) and DIP (Turkey) 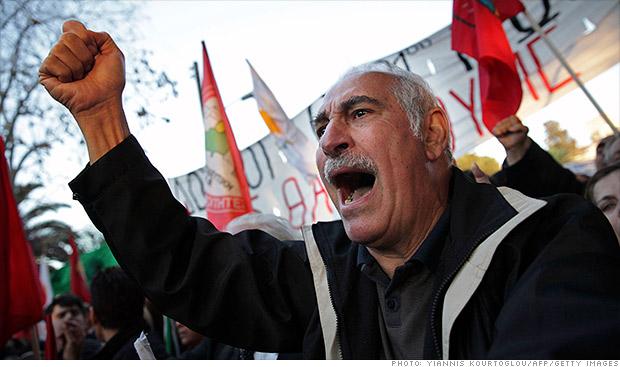 Reject the robbery of the capitalist brigands!
Greek Cypriot and Turkish Cypriot, unite and fight!
For a united socialist Cyprus!
Kick the EU out! For the Socialist United States of Europe!

The Troika has burned its fingers in Cyprus. It overshot and the brutal measures that it tried to impose on the people of Cyprus fired back. It tried to impose, in addition to a near 10 per cent one-off levy on the Russian money launderers, a near 7 per cent levy also on the small depositors of the island: workers and peasants, widows and pensioners were all robbed of their hard-won savings of years! The people of Cyprus immediately took to the streets and rejected these measures. In the vote taken in the Cypriot parliament in the South, not one single deputy voted for the measures agreed to by a president elected by a majority of the people less than a month ago! Total defeat for Merkel, the new tsaritsa of Europe! Shameful rejection for EU imperialism! Tiny Cyprus, producing 0.2 per cent of the overall GDP of the EU, is now threatening a collapse of the whole system!

Let there be no mistake! These measures are only the most extreme and blatant form given to the attack on the working class by the Troika of the EU, the ECB and the IMF in all the countries of Europe where the economic crisis has created a situation of emergency, i.e. Greece, Ireland, Portugal, and Spain, but also probably Italy and others pretty soon. The EU, with Angela Merkel at its head, acting as the IMF of Europe, is trying to load the whole burden of the crisis caused by the capitalist class on the shoulders of workers, peasants, pensioners, women, youth, the destitute and the poor.

This is a crisis of vast proportions. It is a scourge that has gripped not only Cyprus, nor Europe at large alone, but the whole world. Japan is entering the third decade of a depression. Britain and the Eurozone countries are again in recession. The US, barely growing, is tied down by an immense sovereign debt that has exceeded its GDP and a budget deficit that limits the possibilities of stimulating the economy through expansionary policies. China, India, Brazil and other “emerging” economies are coming more and more under the sway of the stagnation of the imperialist countries. The countries on the southern periphery of Europe that are being victimised on the altar of the Troika are really only the most extreme cases of the bankruptcy of the capitalist economy all over the world. This is a crisis that signals the historic decline of capitalism.

With the elections in Italy, a new stage has opened up. In this context, the Cyprus events have created explosive circumstances not only in the country but all around Europe. As could have been foreseen, people all around Europe have lost confidence in the banking system. Cyprus was in fact only a test of what is to come in other countries. The people see this and are starting to withdraw their money from the banks. The conditions for a widespread bank run are gathering. The European economy has once again come to the brink of the precipice. Even if this is overcome in the short run, there is no solution to this crisis apart from the rise to power of the working class and the reconstruction of the economy on socialist bases at the European scale.

It is high time to rise up! The labouring population of Greece has been waging a battle marred by the evasions of the union bureaucracy. The workers and youth of Spain have again and again demonstrated their indignation. The people of Italy have buried in the ballot box the practitioners of austerity. In all countries the workers and the youth have expressed their anger. But this is not enough. We need an international movement that repudiates the debt piled up by the capitalists and the bankers, a movement for the nationalisation of the banks under workers’ control, a movement that fights against the imperialism of the EU. All fighting forces should come together in all these countries to fight and spread the struggle to those countries not yet touched as direly.

Cyprus could be a pioneer in this. This is an island where the national question has been a burning issue for half a century. Pitting Turk against Greek, British imperialism divided the Cypriot people, manipulating the situation in order to guard jealously its military bases on the island, making the island into the legendary “floating aircraft carrier”. It is high time for Greek and Turkish Cypriots to realise that all the suffering they have gone through is the making of bourgeois states, be it imperialist US, Britain or the EU or the more peripheral Greece or Turkey. It is now these very imperialist states which, in the name of the interests of the European bourgeoisie, of its “competitiveness”, of its “economy” that the meagre  economies of the workers and pensioners are being plundered, that their wages are being reduced to a pittance, that their jobs are being taken away, that they are left without social services!

On this very island where imperialist capitalism has provoked and still provokes nationalities to ceaselessly fight each other, let us create an internationalist front of the working class and of the youth to fight not each other but the capitalist brigands! Let us build an exemplary united front between Greek and Turk to fight to make the capitalists pay for the crisis rather than the workers and the poor! It is not only in the Greek South of Cyprus that the crisis is taking its toll on the workers. The recent heroic struggle of the workers of the Nicosia municipality in the Turkish North has at times taken confrontational forms. Only a year ago a gigantic mass movement of the working class shook the Northern establishment. The crisis of capitalism is objectively uniting the Cypriot working class. Let us rise to this historic challenge and subjectively respond to the needs of the moment by building a united front between the forces of the working class in the North and the South!

Trade unions in the North should immediately start solidarity actions with their class brothers and sisters in the South. This should be capped by joint action leading into a general strike in both parts of the island in order to impose the demands of the workers on the governing bodies of Cyprus. Let the glorious days of workers’ unity come back to the island!

It is only then that the approaching economic destruction of the island can be stopped. Let no one think that the danger is over. The bourgeois MPs who yesterday voted against the measures imposed under the pressure of the masses as well as the secret dealings of their Russian benefactors will become turncoats tomorrow and capitulate to the pressures of EU imperialism in the name of “economic realism”, provided that new face saving measures that will not draw the wrath of the Russian money launderers can be agreed upon. The Russian oligarchs will be saved and the workers and the poor will go under. There is no place for complacency. Either workers’ independent action or social cannibalism, Greek style!

Workers of all nationalities of Cyprus! Unite and fight! You have next to nothing to lose and a reunified country and a decent future for your children to win!