The Coronavirus pandemic: What a difference socialism would make 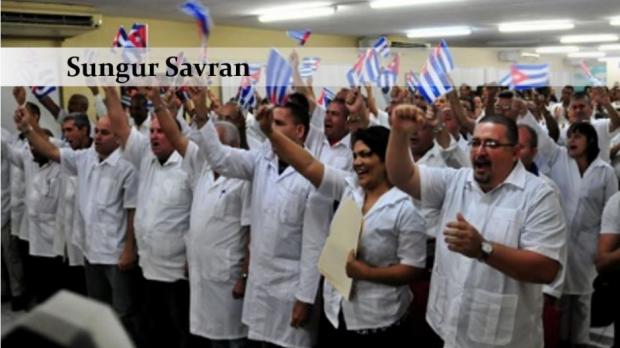 The scientific answer to the question of whether the Coronavirus has its roots exclusively in natural processes or, alternatively, whether it is also connecter to the socio-economic conditions that have historically been prepared by capitalism will probably require a long period of research and reflection. Until then, we will have to assume, since we do not have contrary evidence, that the virus emerged independently of socio-economic conditions or, in other words, that it is a purely natural phenomenon. Many are those who derive from this that the catastrophe brought by the virus was inescapable. There are those who go further to assert, in perfectly Malthusian spirit, that it is an instrument used by Allah or God to regulate the functioning of human society.

This inescapability argument is a pure case of non sequitur. We have claimed from day one that the catastrophe that has descended on humanity is the making of capitalism. The virus may not be, but the catastrophe is. If socialism were the dominant social formation on the planet, the damage that the virus would cause would have been much more limited. It might even have been brought under control before it spread outwards from China, its first home. And even if it had spread afield, the number of casualties would have been much lower. This is no wanton propaganda claim. It is a proposition that flows directly from the undeniable differences between the fundamental characteristic properties of the two modes of production in discussion.

Let us first take up the question of the growing over of the epidemic into a pandemic by spreading outside of China to travel the entire planet. Now, if we were living under socialism, this would certainly not have meant that there would be a less dense web of relations between China and the rest of the world in the spheres of the economy, education, travel and the like; if anything there would have been an even deeper integration. How is it then that we can talk of the possibility of the epidemic being brought “under control before it spread outwards from China”? That is because under socialism the world will be living in a fraternal commonwealth of nations. Behind the endless competition and conflict between nation states in today’s world lies the fact that each of them is used as an instrument of a national fraction of the international bourgeoisie. This leads to a situation where, despite the semblance of unity projected by the United Nations system and all the international cooperation in different spheres, each nation state looks after, in the last instance, the interests of its own ruling class.

Had the epidemic broken out in China under socialism, all the nations of the world and the supra-national instances and agencies that united them in different spheres of activity would immediately have shared a part of their scientific skills, their trained human resources, and their material resources with China so as to help bring under control the Coronavirus. This they would have done not as the manifestation of an imaginary altruism of the type “let us rush to help our Chinese sisters and brothers”, but on the basis of an awareness that in a perfectly integrated world, their own interests are dependent on the interests of the others. (As socialism develops, even altruistic behaviour would become stronger until it can be considered no longer imaginary.) In other words, they would have done it so that the virus would not wreak havoc on other human communities outside China, including their own community. Under capitalism, on the other hand, international integration marches forward hand in hand, and in contradiction, with competition or even (in this case) hostility because of the diverging and conflicting interests of the national fractions of the bourgeoisie. The consequences are clear for all to see: America has already exceeded the number of infections earlier observed in China, a country that harbours almost five times its population and Italy has achieved the remarkable feat of surpassing the number of casualties of that same country which happens to have a population 25 times its own! These countries did not lift a finger when China was being ravaged by the virus and it was they who are now suffering for it. What else does this show that in a perfectly integrated world, capitalism is an irrational and obsolete system? Should anyone harbour doubts regarding our claim, we would like to remind them that doctors from Cuba, a poor country, have rushed to the help of Lombardia, Italy. Lombardia is not il Mezzogiorno, it is one of the richest regions of Europe!

Let us assume that the virus could not be stopped in China under socialism either. When it reached other countries, socialism would have waged a much more effective battle against it than now simply because it is a planned system. There is a span of time of around a month and a half between the epidemic reaching threatening levels in Wuhan and its spread to Europe, and somewhat later, America. Countries living under socialism would have made themselves much stronger and more resilient in the fight against the virus than capitalist countries thanks to their planned economy. Some would object that capitalist governments could also have prepared plans regarding an epidemic. Of course they could. But this is not what we are talking about. When we say “planning” we are not talking about some files in computers prepared in certain talking shops in certain capitalist countries. Planning is a relation of production, not documents bearing sumptuous titles of the type “Master Plan for the Integral Fight against the Pandemic of the Century”!

Just look at this example: even in the most powerful country, wielding the largest economy in the world, the United States, the scarcity of test kits prevented the meticulous tracking of the disease and the drawing up of a realistic picture of its distribution geographically, with respect to economic groups or different population groups etc. so as to make the struggle against the virus much more effective. The whole world knows that from the rich United States to the middle-income Turkey passing through G-7 member Italy, many capitalist countries simply did not test enough for days, or even weeks in some cases, whereas the president of the World Health Organisation said very clearly that as “you cannot fight a fire blindfolded”, you cannot fight the pandemic without knowing who is infected, drawing the conclusion: “Test, test, test!”

America is now facing, at the time of writing, a shortage of Personal Protective Equipment, Intensive Care Unit beds, respirators, even high-grade masks etc. And yet we know that car factories can immediately be restructured so as to produce respirators, that hospitals can be built and furnished in a matter of days (cf. China), that many textiles factories can be overhauled so as to produce quality masks etc. So where is the planning that capitalist countries can make? It may be retorted that no one could know before the fact that such would be the scale of the calamity. But even now, when the Surgeon General admits the problem, not only America but all capitalist countries are still having trouble in mobilising the resources necessary to supply rapidly in response to such an urgent need the equipment necessary. They fight it out over whatever there exists according to the sacrosanct rules of the market, not only among nations, but also among the 50 states of the Disunited States of America. And when need be, they even resort to piracy, like the case of a hefty delivery of equipment to be sent to the Land of Berlin being diverted to the United States as it was being flown out from Thailand to Germany! And why all this scarcity despite not only overall planning but also concrete decisions of governments? Because under capitalism the entire production system is geared to the production of surplus-value and you cannot expect capitalists to forgo their profit and produce for the general interests of society. You need nationalisations to overcome barriers set by the capitalist relations of production swiftly.

A more complete discussion of the difference socialism would have made would take as far afield. Let us wind up by mentioning one last vital difference. Socialism is based on meeting the basic indispensable needs of the working population such as education, health care, housing and others. Nobody lives a miserable existence, remaining jobless or even homeless and uncertain of their future. Hence the overall public health picture is incomparably better under socialism than under the richest capitalist country. Even in the case of the experience of socialist construction in the 20th century, bearing the burden of so many distortions and deformations and defects, this was an indubitable achievement. Capitalism, on the contrary, is class struggle. Capital does take a step back or two when circumstances impose that (the so-called “welfare state”). But when its interests dictate another course, it will step up class struggle and cut down on all social services in cold-blooded ruthlessness. Thus the neoliberal assault on all gains of the working class! The bourgeoisie, in a frenetic course to take back what it had conceded over the three decades from the end of the second war all the way up to Thatcher and Reagan, decimated the health care system around the world. That is why the patients are lying on the floors of hospital wards in Italy and Spain! That is why the richest city of the world, New York, home to Wall Street, is the epicentre of the pandemic!

Socialism is as necessary as our daily bread and the air that we breathe if we wish to survive!