Condemn the Armenian genocide in the name of proletarian internationalism! 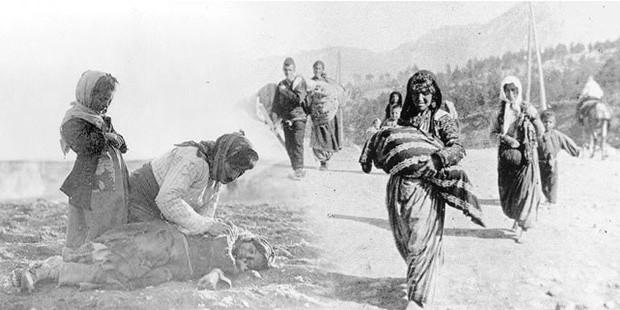 2015 is the centenary of the deportation and massacre to which the Armenians of the Anatolian plateau were subjected by the Ottoman government under the Committee of Union and Progress. We as the Revolutionary Workers’ Party (DIP) declare that these events amount to genocide and that governments that purport to represent the people of Turkey should recognise this act of genocide and do whatever is necessary and possible to redeem and redress the harm thus done to the Armenian people.

1. The Turkish state and those historians and intellectuals who act as its mouthpiece have consistently denied the genocide. Their arguments range from the minimisation of casualties (the lowest figure cited being 320 thousand as against the 1.5 million put forward by many Armenian and other historians) to the claim that the massacres were reciprocal. They forget two simple facts. First, the Armenian population of eastern Anatolia, the western part of the historic fatherland of the Armenians, while numbering in between 1.2-2 million at the beginning of 1915 was reduced to below 100 thousand in the space of a mere two years. Genocide does not exclusively imply massacres, but also includes such things as ethnic cleansing, forcible conversion of faith or ethnic identity, criminalisation of a certain ethnic identity, the pillaging of the property and possessions of an entire people, the destruction of their cultural and religious heritage etc. All of this has been amply documented in the case of the Armenians of Anatolia. Secondly, state power was in the hands of the Turkish dominant nation, which renders all talk about mutual carnage empty chatter.

2. The stereotypical explanation offered for this barbaric cruelty by liberal historiography has been the “construction of Turkish identity” or “Unionist mentality”, the latter implying the world outlook of the Committee of Union and Progress, the party then in power. Our view is fundamentally different. We assert that what lay behind the Armenian genocide was class struggle of several orders. The vicious attacks against the Armenians had its earliest roots in the looting of the surplus product of the Armenian peasantry by the ruling stratum of Kurdish tribes, which shared the same geographical territory with the Armenians. The later but stronger and more radical drive came from the urge for primitive accumulation on the part of the nascent Turkish bourgeoisie at the turn of the century fighting against the economic dominance of the non-Muslim moneyed classes in Ottoman society. It was this class fraction that was represented by the Unionists in power and dispossessed the Armenian and, in a different manner, Greek population of Anatolia to amass capital in its own hands. These domestic factors were reinforced by the support extended to the Turkish bourgeoisie by the German imperialist bourgeoisie, instrumentalising the power of the Ottoman state in its intra-class struggle against the other imperialist bourgeoisies of Europe, that is, British, French and Russian.

3. We do not approach the question of the Armenian genocide from a legalistic viewpoint. Advocating world revolution based on proletarian internationalism, our concern is to re-establish friendship and trust between the workers and labourers of Turkey and Armenia. For us this is first and foremost a political question that has to do with the prospect of revolution in the region. All social upheavals in the Eurasian land mass from 1905 and 1917 to the period 1989-1991 passing through World War I witnessed massacres involving the Armenians, the Turks and the Azeris, the latter being the ethnic brethren of Anatolian Turks inhabiting the Caucasus. On the other hand, the Armenians and the Kurds each claim roughly the same geographic territory as their historic motherland. So the fate of the revolution in the Caucasus, Anatolia and Mesopotamia hinges upon the relationships established between these four peoples.

4. The recognition of the genocide, compensation for the seized property of the Armenians, the opening of the border between Turkey and Armenia, support by the Turkish state to the Armenian people, which finds itself in dire straits since the collapse of the Soviet Union, are all measures that can form the initial steps for the reestablishment of confidence and mutual respect.

5. It is not to be doubted that, with its narrow outlook based on national self-interest, the bourgeoisie of each nation will prove to be an obstacle in the way of a rapprochement. The real fraternity between these four peoples will depend on the work of revolutionary socialists of each country.

6. Given the deadlock over the question of the recognition of the genocide, the position and policy of the German state bears the potential of playing a decisive role in providing an opening. Germany was the ally and protector of the Ottoman state during World War I. The commanders of the Ottoman-Turkish army were German field marshals, generals and admirals. It is absolutely impossible for the genocide to have taken place without German consent, even encouragement. German state archives are bound to prove to be a potential treasure trove of documents conclusively proving premeditated genocide. The German Kaiser and the Reich were already responsible for the genocide of the Herrero people in what was then called German Southwest Africa, what is present-day Namibia. Already the limited amount of German documents disclosed shed considerable light on what happened in Turkey around that time. We strongly call on the German socialist movement and German democrats to press for the complete opening of German archives relevant to that historical period. We summon them to press the German government to recognise and condemn the Armenian genocide.

7. The cause for the recognition of the genocide by Turkey does not gain much from ill-conceived pressures by the state organs of some imperialist countries and is positively harmed by such irresponsible theatrics such as that of the Pope in early April, conspicuous for its lack of modesty coming from the head of an institution wholly immersed in the Holocaust. That the head of the largest denomination of Christianity should have been the first to speak on the centenary of the genocide will only serve those who wish to make the Muslim majority of Turkey believe that the question of the Armenian genocide is a construct of Christendom or more generally the West in order to isolate and weaken Turkey.

8. In the final analysis, all the historic contradictions and present-day political and military conflicts (such as the question of Naghorno Karabakh) between these four peoples can only be solved within the framework of the Socialist Federations of the Caucasus and of the Middle East. These peoples shared the same geographic territory for a full millennium before the onset of the barbaric massacres of the first half of the 20th century. The socialism of the future will build on all the best that existed in that cohabitation.

Long live the fraternity of the Armenian, Turkish and Kurdish peoples!

Long live the Fourth International, the only refuge of proletarian internationalism after the bureaucratic degeneration of the Soviet state and its sequels!