Communiqué of the Revolutionary Workers’ Party (DIP): Those who dragged Turkey into the maelstrom of sectarian civil war and who thereby have Syrianised Turkey are responsible for the Sultanahmet massacre! The AKP and Erdoğan are guilty! 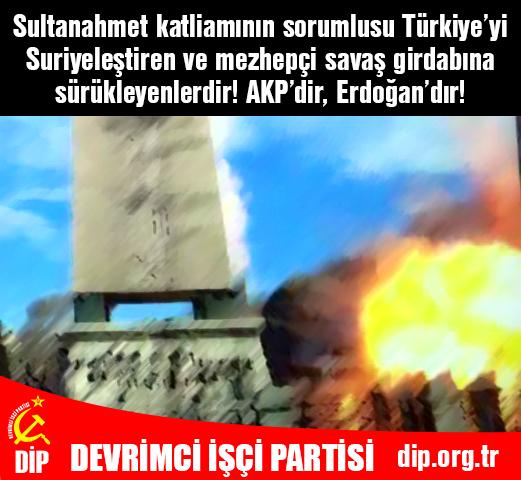 The following is the text of a DIP statement on the Sultanahmet blast in Istanbul that killed German tourists attributed to ISIL. The text here is the English translation of the original Turkish version.

In Sultanahmet, one of the most touristic and central parts of Istanbul, a bomb attack of ISIL killed 11 persons and left dozens of people wounded. The Revolutionary Workers’ Party condemns this attack and offers its condolences to the relatives of the victims. From the political point of view, it is the AKP government and Erdoğan, trying to divide Turkey and the Middle East on the basis of sectarianism, who are responsible for this explosion.  This has been yet another step on the way to the Syrianisation of Turkey. The AKP government is dragging Turkey into the maelstrom of sectarian war and every step of this government ends up with bloodshed and massacre. The AKP might drown in this maelstrom, but those who have lost their lives in the massacres are the toiling peoples and innocent persons.

The Sultanahmet attack did not happen out of the blue. The Revolutionary Workers’ Party had been warning for a long time that the takfiri-sectarian murderers were targeting in the Middle East not just Iraq and Syria, but also Turkey. It had been pointing out that the AKP was leading Turkey down the road of Syrianisation and that Turkey was the mastermind of this reactionary war, along with Qatar and Saudi Arabia. This vile attack against German tourists is a result of the quagmire Turkey finds itself in while trying to assume the leadership of the Sunni bloc. All this cannot be understood outside the context of the reactionary war policy of Erdoğan and the AKP government.

Just after the Ankara massacre, Prime Minister Davutoğlu caused a major scandal by replying to a question about suicide bombers, “We have the list of suicide bombers, but we cannot arrest them before the realization of the act”. Having stood by idly after the Diyarbakır, Suruç and Ankara attacks, the government announced the name of the attacker immediately after this incident. Although the media apparatus of the AKP is saying that the case was painstakingly solved, Davutoğlu’s past and the mystery around the attack leave not a few questions unsolved. The publicity ban imposed after the attack exposes the intention of the AKP government. The people of Turkey should ask: Was it one of those suicide bombers whose names were known by Davutoğlu yet remained free who spilt the blood of innocent people in the heart of Istanbul? Or was it one of those takfiri militants who pass the Turkish border freely who committed the massacre? Davutoğlu is guilty.

This massacre is caused by the AKP, which carried the reactionary civil war in Syria to Turkey for its political survival. The AKP, by claiming that this attack was a result of Turkey’s struggle against terrorism, absolves its own role in these massacres. Erdoğan’s speech is a complete abdication of reason. Erdoğan, in his statement, listed the organizations that momentarily crossed his mind and once again created a so-called “cocktail of organizations”. He said that the bomber was a citizen of Syria and he avoided pronouncing the word ISIL. While only 44 seconds of his speech were related to the bomb attack, he dedicated 10 minutes to attack the academics who had published a petition for peace and overtly pointed to them as a target. This is the reflection of a psychology of guilt. Agents of the sectarian war, instigated for oil by Erdoğan, himself candidate for the leadership of the regional reactionary forces and aspirant “Rais” of the Sunni world along with Qatar and Saudi Arabia, have killed in cowardly fashion innocent people in Sultanahmet. Erdoğan is guilty.

On the other hand, deputy prime-minister Numan Kurtulmuş said that what happened was a repercussion of the proxy wars in Syria. Kurtulmuş, by using the expression “proxy wars”, admits that the imperialists and the countries of the region, including Turkey, support, in one way or another, certain organizations in the Syrian civil war. The executives of the AKP and its spin-doctors have repeatedly said that Turkey was helping and protecting Turkoman and Sunni takfiri forces in Syria.  It is the AKP that has sustained the stooges of war in Syria, whose relations with their bosses were called “proxy” by Kurtulmuş. The AKP cannot so easily wash its hands of the sectarian terrorism which was sustained by this same party. Turkey officially considers ISIL a terrorist organization. Turkey was recently constrained to withdraw its troops from the Bashiqa base near Mosul, whose presence there had sparked a reaction from the Iraqi government. Lo and behold! Suddenly ISIL attacks the Bashiqa base with rockets. Erdoğan and the AKP used this as an excuse in order to maintain Turkey’s military presence in this region, saying “this attack proves that we were right”. When the Iraqi government insisted on complete withdrawal of Turkish troops, with another uncanny coincidence, propaganda videos of ISIL’s attack on Bashiqa were uploaded on the Internet. Let’s not fall in for this collusion of the AKP and takfiri forces. Both ISIL and the AKP are guilty.

The working class and the oppressed should unite against takfirism and its benefactor, the AKP government. We cannot fight against takfirism without fighting against imperialism. The imperialists of the European Union and the USA are most responsible for the current situation of the Middle East as the centre of war in the world. The Zionists of Israel are jubilating on the sly while a sectarian war is going on and bombs are exploding in Baghdad, in Beirut and in Istanbul. It is the toiling masses who suffer from these wars. Turkish, Kurdish, Arabic and Persian toilers should struggle and unite against their own reactionary-sectarian government.