On the centenary of the establishment of the Comintern, the flag of internationalism will rise in Istanbul on the 10th of February 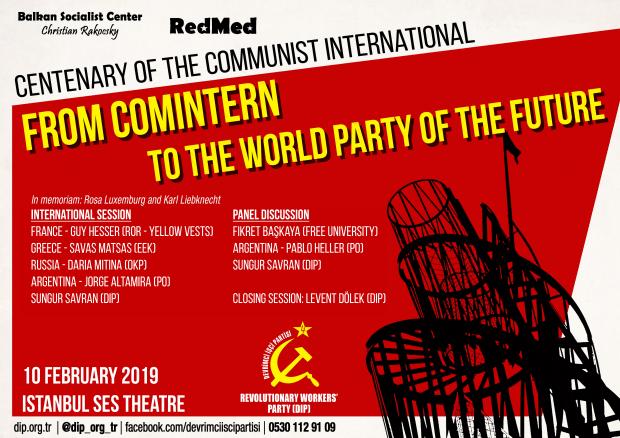 When the First World War broke out in 1914, the parties of the Second International adopted a reactionary attitude, each supporting their country’s bourgeoisie. This annihilated the founding purpose of the International, which was built on the basis of common interests of international working class. Only five years later, in 1919, the Third International, the Communist International (in abbreviated form the Comintern), was established in Moscow between the 2nd and 6th of March. It was established with the enthusiasm the October Revolution stirred, the first victorious revolution in history to establish a lasting proletarian power, as a beacon of hope for the whole working class of the world.

The Comintern was the pinnacle of international organization of the working class to date. It was at the most advanced level in that with its organizational discipline, programmatic clarity, and with regards to the mass power it reached with the impact of the triumphant October Revolution. The Revolutionary Workers’ Party (DIP), in its 5th Congress  held in the last months of 2018, declared the year 2019 as the year of the Comintern, and set sight to carry out several activities in order to pass the legacy of the Comintern, the most advanced world party of the working class, to  the vanguard of the class. In accordance with this purpose, DIP will host an international conference in Istanbul on the 10th of February. The centenary of the founding of the Comintern will be celebrated with a truly international feast, organized by the RedMed web network and Christian Rakovsky Balkan Socialist Center.

The conference titled "From Comintern to the World Party of the Future" will host communists and representatives of revolutionary parties from 10 countries apart from Turkey. Darya Mitina, the secretary of International Relations of the United Communist Party of Russia (OKP), Savas Michael-Matsas, the general secretary of our sisterparty in Greece, EEK (Workers Revolutionary Party) and at the same time one of the founders of RedMed and the Rakovsky Center, Jorge Altamira, historic leader of our sister party in Argentina, Partido Obrero (Workers Party), and Sungur Savran, the chairman of DIP, will discuss the Comintern and the legacy of the Internationals.  A second session will include  Pablo Heller, another leader of the PO of Argentina, Fikret Başkaya founder of Free University (Özgür Üniversite), and Sungur Savran, to discuss the tasks of today’s international, the legacy of the Comintern and construction of the World Party of the future. From Azerbaijan to Serbia, from Finland to Macedonia, from Bulgaria to France, shaken by the “Yellow Vests” for months, revolutionaries and Marxists of eleven countries will raise the voice of proletarian internationalism.

We are not nostalgics that yearn for a return to a golden age for the communist movement. We commemorate the Comintern to set our course right and to learn from its successes and victories but also its shortcomings. We are fighting to build the World Party of tomorrow. Witness our focus on two countries which are now at the center of attention of all those who fight for a better future for humanity. We have a delegation from France who are part of the Yellow Vests movement and we have a message of solidarity and greetings from distant Venezuela from our sister organization in that country. To both we extend our solidarity and best wishes.

Let us join hands, after this meeting, to raise the flag of the international revolutionary leadership of the working class, to revitalize the achievements of the Comintern and to strengthen the struggle to create a vanguard for the world proletariat.