Call for the 2nd Workers Euro-Conference on Europe in crisis 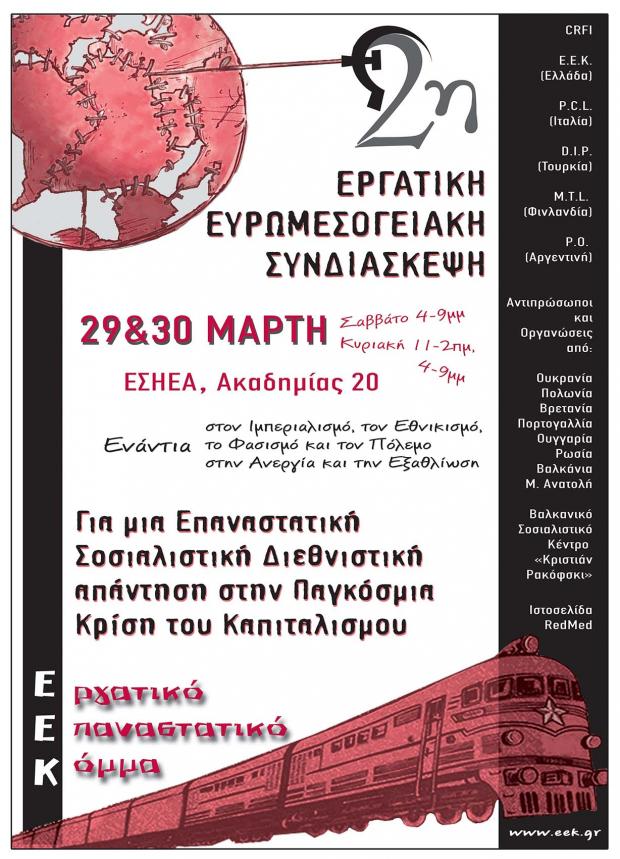 WE CALL the militant workers and popular organizations and social movements in Europe, and internationally, involved in social struggles against capitalist barbarism today, as well as the forces of the revolutionary Left coming from different traditions, to join us for a 2nd Workers International Conference on the crisis in Europe, for an internationalist alternative and a socialist way out , taking place on March 29-30, 2014, in Athens, Greece.

The prognosis of our previous 1st Workers Euro-Conference held in Athens, in June 2103, has been confirmed: “Reality demolishes the claims that the situation has been stabilized and the euro-zone crisis has receded... The undeniable fact is that “austerity” programs have reached their political limits, and public debt is unsustainable. Nevertheless, all the governments all over Europe continue on the same course of social catastrophe...”

The ongoing world capitalist crisis is the basis and the driving force of the barbarism that threatens us. Various “success stories” claimed by the rulers in Ireland, or Greece or Spain or Portugal, thanks to “austerity”, i. e. social cannibalism imposed by the hated Troika of the EU/ECB/IMF, demonstrate only the cynicism of the ruling classes and of their governments. “Prospects” for a “jobless recovery”, a contradiction in terms, cannot fool anybody. For seven years now the unprecedented global crisis, superseding even the Great Depression of the 1930s, has engulfed the capitalist world. Europe has become the epicenter of that crisis plunging in a vicious circle of over-indebtedness and recession, exasperated now but what Christine Lagarde, head of the IMF has called “the ogre of deflation”.

Mass unemployment has become an endless nightmare for the vast majority of the population, while all social services, particularly in health and education, are collapsing in ruins. Social and democratic rights won by a long history of hard struggles of the working class and all the oppressed are destroyed. Migrant communities face racist discrimination and continuous attacks by EU and State authorities, which are assisted by the growing far right parties and fascist gangs. The EU has transformed Europe into a “Fortress Europe” and the Mediterranean into a graveyard for immigrants as the non-stop tragedies in Lampedusa (Italy) or Farmakonisi (Greece) demonstrate. Women’s oppression escalates, as the anti-abortion legislation introduced in Spain shows, as well as discrimination against sexual orientation, social exclusion and oppression of all minorities.

In response, social resistance is growing and mass mobilizations are developing particularly in Southern Europe, in Portugal, Spain, Greece, confronting governments in loss of legitimacy declaring a 'state of exception' to make the people to pay for capitalism’s bankruptcy. The sharpening class struggle is deepening regime crisis in different degrees and forms in one country after another. Partial victories as in Portugal's dockers’ struggle for jobs recently or against privatization of health in Spain or the protracted strikes and occupations in the public sector in Greece manifest that the combat capacity of the working class and the pauperized masses is far from being broken; on the contrary, the socio-economic crisis has led to an unprecedented and still unresolved political crisis of the bourgeois parliamentary system, a crisis of political power.

The question that is bluntly posed is not what bourgeois party or coalition of parties or appointed “ technocrats” in the service of the capitalist system could open a way out from the crisis, but what social force, what class, by taking political power, can give an end to this endless social catastrophe, overthrowing the bankrupt system, and reorganizing all society on new bases. Our answer is unequivocal: Only the working class supported by all the exploited, the oppressed and socially excluded can do this, establishing the bases of socialism.

The EU, Ukraine, Bosnia and the Balkans

The 1st Workers Euro-Conference had rightly warned “the EU imperialists try not only to impose on the backs of the European popular masses but also to export their crisis abroad: in Eastern Europe, the Balkans, Russia, as well as in the Middle East after the revolutionary popular awakening of the Arab Spring”.

The dramatic events in Ukraine make it crystal clear: the entire country has imploded, devastated by the shameless robbery of its wealth by the local oligarchic cliques, both pro-EU and Russophiles, in collusion with global finance capital, and the EU and US imperialists exploiting the situation, social despair and the legitimate grievances of the people, mobilizing, in the name of “democracy”, the Nazi gangs of 'Pravyi Sektor” and “Svoboda” to achieve the colonization of Ukraine, and of the entire former Soviet space, their declared goal from the collapse of the so-called “actually existing Socialism” in 1989/91. Not accidentally, the Financial Times (24/2/2014), the voice of the City of London, hails the Euro-Maidan as the most important event “since the collapse of the Soviet bloc” that “heralds the hour of Europe”. The later view is rather disputed by the neoconservative US Assistant Secretary of State Victoria Nuland in her vulgar language, contemptuous for the “European and Germans”, used while she was giving directives on the phone to the US Ambassador in Kiev, leaked by the Russian FSB!

It is obvious that the violent antagonisms between US, EU/Germany and Russia on the strategically positioned Ukraine threatens to dismember this country like former Yugoslavia putting at the same time fire in a powder keg that can explode the entire European Continent. To defeat the threat it is needed urgently a new internationalist orientation, a truly revolutionary people's struggle against Western imperialist colonization and against subjugation to Russian Bonapartism, a struggle to overthrow and expropriate the wealth and power of the entire corrupt oligarchy, to smash fascism and the nostalgics of Bandera and Hitler- for an independent, united, socialist Ukraine ruled by its own people's, the workers and peasants Councils!

Ukraine can and should not be a new, pulverized Yugoslavia. It is a ruse of History that at the same moment, precisely at the heart of former Yugoslavia, in Bosnia, a fragmented country reduced into an EU/NATO protectorate, the battlefield of ferocious inter-ethnic and inter-religious clashes and massacres by antagonistic nationalisms fomented and manipulated by EU and US imperialism, in February 2014 the workers of Tuzla initiated a genuine proletarian revolutionary revolt followed by all the people of Bosnia, a rebellion against both all the oligarchic corrupt nationalist cliques, and against the imperialist Dayton Accords, writing in the walls of Serajevo, Mostar, and Banja Luka the slogan “Death to nationalism and to imperialism!” The formation of grassroots forms of popular self-organization and direct democracy like the Tuzla Plenum and the Serajevo Plenum manifest strongly the same tendency that it was previously manifested in Tahrir, Puerta del Sol, Syntagma Square, Zuccotti Park, or Gezi Park/Taksim.

Solidarity demonstrations in Belgrade, Serbia, and in Podgornica, Montenegro, show clearly that a turning point is reached in the Balkans, in Europe, and internationally. Rightly the Statement on Bosnia issued by the Balkan Socialist Center “Christian Rakovsky” stresses: “Coming in the heels of the overthrow of the Romanian government, of months-long ceaseless demonstrations in Bulgaria, of massive protests against economic conditions in Slovenia, of the 2008 revolt and the momentous class struggles of 2010-2013 against the Troika and successive governments in Greece and of the spectacular Gezi Park events, truly a people’s rebellion, in Turkey last summer, the uprising in BiH takes on an additional significance. The Balkans is rife with revolutionary fervour. It is the working class and youth of this unfortunate region that will reunite the multifarious spectrum of peoples in this geography in and through revolutionary activity! ” It closes by re-claiming the old but always and now more actual than ever before, revolutionary slogan: Forward to the Balkans Socialist Federation!

The EU, the Middle East, Africa

The attempt of the EU to export its crisis is not limited to Eastern Europe, the former Soviet Union countries and the Balkans. Never forgetting their colonialist past and neocolonialist present, the European imperialists from the first moment have been trying to torpedo, tame, hijack, and defeat the revolutionary expansion and deepening of the Arab revolutions by using all counterrevolutionary means, war aggressions, and military coups such as in Egypt, conspiring with all local reactionary forces, all of this from Tunisia and Egypt to Yemen and Bahrein, spreading chaos in Libya and Syria—and extending it to Mali and the Central African Republic.

The decades-long struggle of the Kurds, an oppressed people par excellence, has now yielded a ray of hope in the form of the declaration of self-rule in the Syrian part of Kurdistan or Western Kurdistan, called Rojava (the West) by the Kurds themselves. This new entity is entirely different in character from the Kurdish Regional Government of Barzani in Iraq, which has been at the service of US imperialism and, more recently, of the reactionary Turkish government. The imperialists and their Turkish ally are now trying, with the assistance of their zealous assistant Barzani, to nip in the bud this new home of Kurdish self-rule independent of imperialism.

Imperialism is also maneuvering in Cyprus to lay its hands on the newly discovered off-shore natural gas there and to stabilize the political situation through a “solution” that would make the island permanently subservient to the needs of NATO and the US, Britain and the EU at large.

Solidarity to the oppressed peoples against imperialism and their local servants, and opposition to and political independence from all the bankrupt secular or religious, liberal or military nationalist elites, is more than ever necessary. The key question is the consolidation and strengthening in political, programmatic, organizational terms of a revolutionary leadership in the working class, the youth, the poor peasantry and the urban poor for the socialist revolution, the social and national emancipation of all the oppressed and the Socialist Federation of the Middle East.

The implications of the capitalist crisis are global, and our answer to the dangers should be as well global and decisive.

As our previous 1st Workers Euro-Conference in June 2013 had rightly stressed, we need urgently to discuss an Emergency Program to resist and defeat the social catastrophe and a plan of common actions unchecked by and free from the “usual” bureaucratic apparatuses of control, to overcome the political void of a real political alternative and build a much needed new revolutionary leadership.

The international and European Left, lacking the program, the perspective and the will for a decisive and radical break with capitalism and the EU, has plunged in an insoluble crisis, leaving an empty space to all kinds of right wing populisms. It is not an accident the fact that the spectacular rise of Syriza in Greece is fetishized by this demoralized Left.

For the coming European elections of May 25, the European Left Party selected Alexis Tsipras as its candidate for President of the bureaucratic imperialist institution of the European Commission.

The political platform of his candidacy and of the ELP, as Alexis Tsipras himself presents it in an article in New Europe magazine, leaves no doubts about its extremely restricted, reformist moderation. He stands for “a democratic and progressive reorientation of the European Union” with an outdated neo-Keynesian program for “reflation” , for “a genuine European Central Bank acting as a lender of last resort not only for banks but also for states”, for taxing (not expropriating) speculative capital in its offshore activities etc. In the most non-historic and anti-historic way, without taking notice that the entire international political, social economic context has changed, it is proposed, for the resolution of the Eurozone debt crisis a “European Debt Conference”, “predicated on the 1953 London Conference for Germany's debt” and not the absolute necessary cancellation of all the public debt to the usurers of the European and global finance capital.

We, organizations and militants of the revolutionary anti-capitalist Left and of the social movements for emancipation, we can take the opportunity of the coming European Elections to wage, in different forms in different European countries, an international and internationalist campaign advancing a real, revolutionary alternative for a socialist way out of the crisis.

We propose for discussion the following programmatic axes: