A brief report on the results of the Greek elections on May 6, 2012 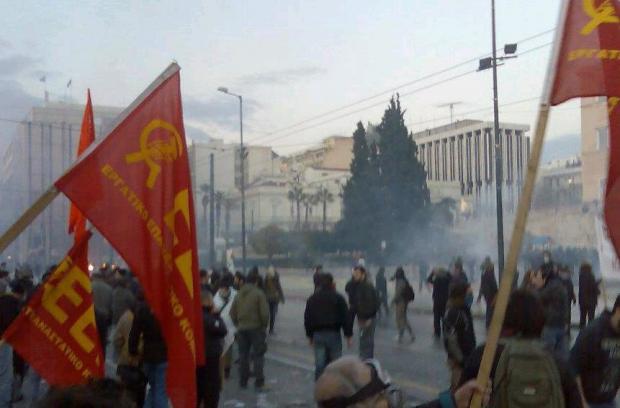 Now, as you know we are again facing new early elections n June 17, after the totally failure to form of a coalition government to impose the “memor an dum”, the austerity program of the EU /ECB/ IMF. The fact that all the pressures by the Greek President of the Republic, by all the Greek bourgeois parties, by the EU Commission, by the ECB, by Merkel’s government, by Lagarde, the head of the IMF etc. failed to produce such a coalition government after May 6, shows clearly that the country had become ungovernable: those above c an not rule as before, those below can not afford to continue to be governed as in the past, an d above all,  the radical turn to the left of the masses expressed in the recent elections  rejecting austerity an d supporting the perspective of a “government of the Left” indicates clearly that a pre-revolutionary situation is developing in the country , affecting   an d deepening the crisis in Europe an d internationally.

Tsipras an d Syriza try an impossible compromise between the rebelled masses from the one side an d capitalism an d imperialism, from the other: to combine the rejection- or rather the “renegotiation”- of the memor an dum while remaining in the Euro-zone an d the EU, an d keeping the capitalist framework.
Ourselves in the EEK, we oppose both  the sectari an reactionary stand by the Stalinists of the KKE an d of the centrists of the ANTARSYA who see to the victory of Syriza just  as a new version of the old regime an d not  as the popular rejection of the old regime an d its parties, as well as the opportunism of other forces who adapt themselves an d dissolve into Syriza, repeating all the old rotten arguments in defense of  a disastrous Popular Front.
We do not participate in the post-electoral  an ticommunist witch hunt of the bourgeois regime, assisted by the Stalinists, against Syriza; we warn against the policies of Syriza an d the prospects of  a class collaboration popular front government; an d we emphasize the necessity to fight for the only real government of the Left, a workers government based on the org an s of workers an d popular struggle ( Workers’ Committees , popular assemblies in the neighborhoods, workers defense squads etc.) fighting capitalist sabotage an d the fascists, a workers’ power that will br eak from the EU, cancel the debt and nationalize  without compensation and under workers control the banks and the strategic sectors of the economy, implement an emergency plan of re-org an ization and plan ning of the economy according to the social needs, an d initiating an international, internationalist struggle together with all Europe an workers for the United Socialist States of Europe.
We have open channels of communication with all the forces of the left, including Syriza. We were and are always for unity in action. We have proposed the above mentioned workers Left government  and program to ANTARSYA for a possible electoral bloc in the coming 17 June elections. The probable is that they will reject it. So, simult an eously, we explore the possibilities to overcome the enormous fin an cial problems, and present again our own independent lists of the EEK with our program for a revolutionary socialist exit from the crisis.
Tweet